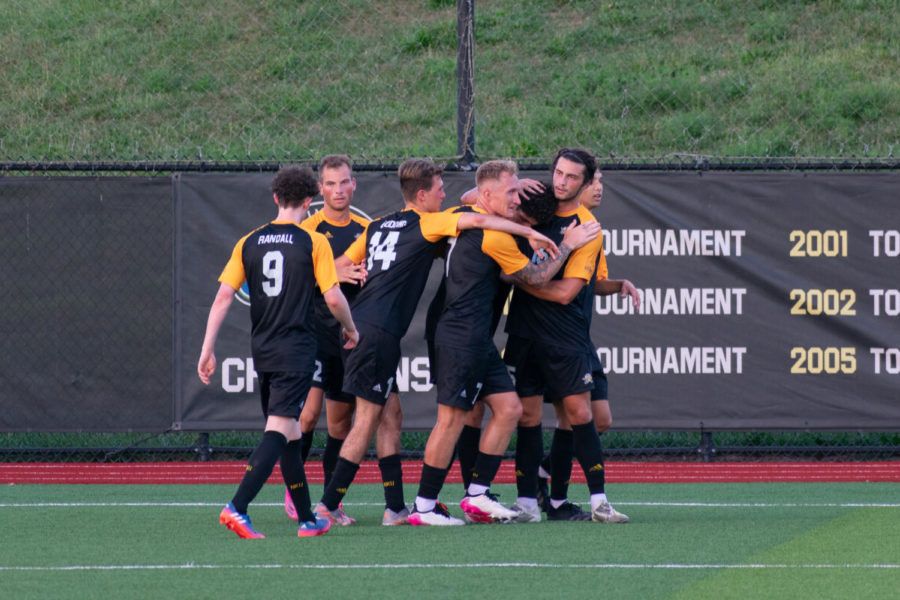 NKU players celebrate a goal during the Norse 3-0 win over Centre on Saturday at NKU Soccer Stadium.

After narrowly defeating Georgetown College in their preseason opener, the Norse suffered setbacks against Bellarmine and the 14th ranked Kentucky Wildcats to conclude their exhibition slate.

“This has been a wake-up for us this preseason,” senior goalkeeper Daniel Bermingham said following the loss to Kentucky on Aug. 20. “I think people just didn’t come in with the right mindset and people need to start waking up, because next week, games actually count and conference games mean everything to us.”

However, despite the early struggles to open the 2021 fall season, the Norse are confident that they have the talent to become the first NKU men’s soccer team to reach the NCAA Tournament during the school’s Division I era, in large part due to the returning experience that the team has coming into the fall.

Riddle and his staff have emphasized to the team that winning the Horizon League regular season championship and cracking the top 25 of the United Soccer Coaches poll was a great first step last season, but the difficult part will be maintaining that level of success.

“What we have said to the boys in preseason now is that the easy part was getting here, now the hard part is going to be to stay in this position.”

Bufton, who led the team with 13 points last season in his first season at NKU, is using last season’s experience to become more of a leader for the younger players going into his senior season.

“It was a difficult year, but it still gives you a lot of experience to help the younger boys coming in, show them the way things are done around here and hopefully they can be confident in themselves,” Bufton said.

In the goal, the Norse will once again look to Bermingham, who became the starting goalkeeper during the 2021 spring season for the Norse and thrived, allowing just seven goals all season. For Bermingham, who began his college career at Iowa Western Community College and has worked his way to the Division I level, the opportunity that he has received at NKU is one that he has relished along the way.

“It’s hard work, it’s my family, I play for them, the name on my back,” Bermingham said. “I’m just trying to make something of myself here at NKU and help us get on the map, and hopefully make a career out of it.”

With that returning experience, the Norse will be able to continue to strengthen the tight bond that they have created in the past year, which Bufton believes will only help the success of the team this fall.

The Norse, who are 1-1 on the season already have carved out a tough non-conference schedule for the fall season, with the hope being that having those quality games on the schedule will help their case for securing an at-large bid for the NCAA Tournament at the end of the season. Among the tough non-conference opponents for the Norse are Louisville, Oral Roberts and Coastal Carolina, all on the road.

“I see how these selections work for the NCAAs and the at-large and you have to have a signature win, so we have got three opportunities away from home to try to get that signature win,” Riddle said.

The Norse will be in action on Friday, Sep. 3 as they battle Oral Roberts in Tulsa, Oklahoma.