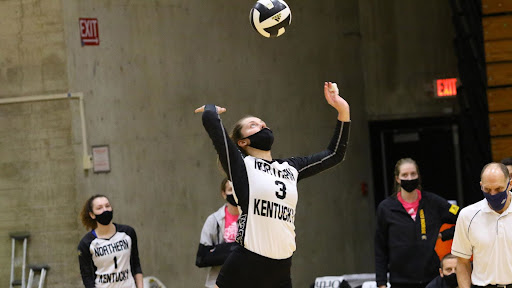 NKU senior outside hitter Anna Brinkmann (3) serves the ball during a previous game.

On Friday, Aug. 27, the Northern Kentucky volleyball team traveled to Columbus, Ohio to face off against Ohio State and Ohio University at the Ohio Invitational.

In the first set, Ohio State jumped out  to an early 8-1 lead in the set and never let up, leaving the first set with a score of 25-10. The Buckeyes had 11 attacks compared to the five the Norse had. The Buckeyes also had advantages with aces (3-0) and blocks (4-1).

The second set is where the Norse started to fight back, leading Ohio State at 7-6, 12-11 and 13-12. It didn’t take long for the Buckeyes to rally back with six straight points that forced an NKU timeout during the run. The Norse fought hard, but ended the set with a 25-18 loss.

The third set began with a similar opening to the previous sets with Ohio State starting off with a 6-0 run, forcing yet another NKU timeout. The Buckeyes continued and put up eight points before NKU’s redshirt middle hitter Abby Kanakry put away an attack. NKU rebounded  the rest of the way, but ended with a loss in the final set 25-14.

The Buckeyes had 38 kills while the Norse finished with 26 kills. NKU and OSU were very close in digs, but the Buckeyes held a slim lead 40-37. Ohio State also held more blocks at the net with 16 blocks compared to NKU’s four.

On Saturday, the Norse took home a win against Ohio University in a nail biting five-set victory.

In the first set, the Norse recorded eight kills, but also had nine hitting errors resulting in a -.025 hitting percentage. Meanwhile the Bobcats recorded 13 kills and just three errors leaving them to come away in the first set and take the win 25-15.

The second set was much better for the Norse hitting as they had eight kills and held OU to only 12 kills. NKU held their ground at the net for five blocks and also turned up the heat at the serving line for a recorded five aces in the set. Abby Kanakry had yet another three kills while Natalie Harding, Reilly Briggs, Anna Brinkmann and Kanakry had two blocks each.

The third set was a turning point for the Norse. This set went back and forth between the two teams featuring 17 ties and seven lead changes. This set was a thriller, but ended in an Ohio victory 25-23 with three straight points to close the set. NKU had 12 kills with three of them being Anna Brinkmans  while OU had 16 kills in the set.

With OU leading 2-1 through four sets,  NKU battled back and was able to get the extra points that were needed for a Norse win. With a 27-25 win, NKU was on fire with Brinkmann having seven attacks without any errors, Briggs added another four kills while Burke recorded eight digs. With the set tied 25-25, Kanakry and Brinkmann put away consecutive kills to close the set 27-25.

Entering the fifth and final set, the Norse and Bobcats were tied 2-2. NKU was quick to score in the fifth set leading 7-1, Burke delivered a pair of aces within the first three points to set the tone. Ohio pulled back within three at 10-7 courtesy of a 6-3 run, but the Norse answered with a kill from Joy Banks, consecutive kills by Brinkmann and the final two from Freshman Sequoia Hunt. NKU won the set 15-8 and left with nine kills compared to the three Ohio had.

Northern Kentucky heads to Louisville, Kentucky, next weekend for a three match set against No. 13 Louisville, (RV) Missouri and South Dakota.