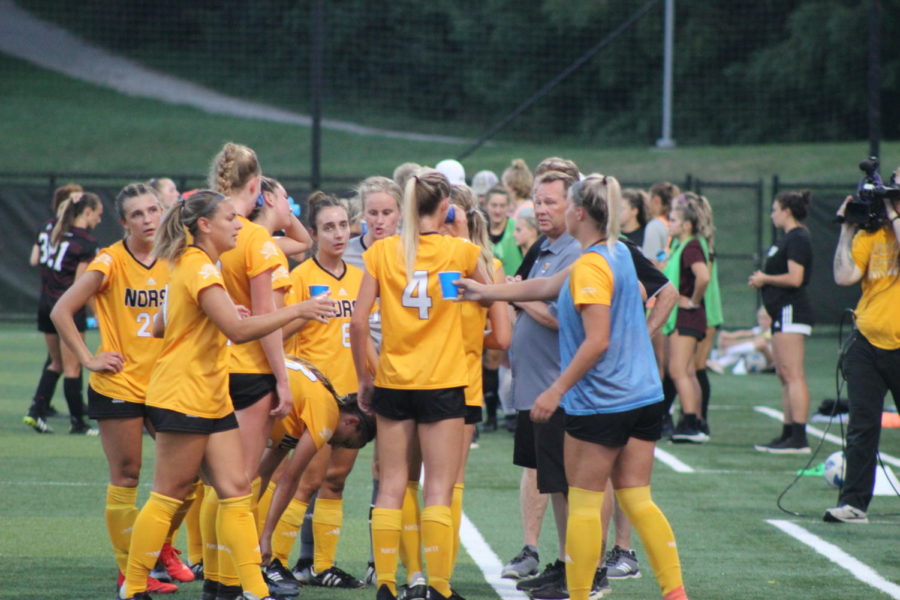 The NKU women’s soccer huddles on the sideline for a water break during a match against Eastern Kentucky.

Last spring, in a shortened regular-season due to the pandemic, the Northern Kentucky women’s soccer team finished 7-0-1 in Horizon League play and reached the Horizon League Tournament championship before falling to Milwaukee in a chance to advance to the NCAA Tournament.

Entering the 2021 fall season, the Norse return a bevy of experienced contributors from that spring team, particularly on the defensive side, led by reigning Horizon League Defensive Player of the Year and Goalkeeper of the Year, Mimi Stines.

Stines posted a magnificent season in the spring, ranking third in the nation in goals against average (0.264) and save percentage (0.929), breaking the NKU record in both categories previously held by Rachel Wood in 2010. Stines’ 136 career saves are now fifth all-time in Norse history.

“It was super special, totally not expected. That was a really big honor to be named both and it really pumps me up for this year, because I feel like it sets the standards really high and I want to live up to those again,” Stines said.

“I think last year, especially toward the end of the season, we harped on defense a ton and so I think we turned into a really defensive team and that was our strong suit,” Stines said. “I think this year, we obviously still have a bunch of good defenders, all of the same defenders are back and we added a few, so I think a defense will be one of our strong suits again.”

Among the newcomers on defense is freshman Lydia Self, who started NKU’s exhibition match against Thomas More on Aug. 16. Additionally, junior Megan Sullivan is back with the team after spending the spring season with the track and field team at NKU.

The Norse lost two players to graduation entering this season, defender Megan Patrick and forward Kailey Ivins, the latter of whom was named Horizon League Player of the Year in the spring, becoming the fifth NKU player in the past six seasons to earn the award.

“Megan was a terrific leader, and Kailey Ivins was also a fantastic leader, so anytime that the team dynamic changes, even a couple players, that can make a big difference,” head coach Bob Sheehan said.

With Ivins now graduated, the Norse will return to a younger group of players to step up in the attack, including junior Lindsey Meyer, who ranked 13th in the country in assists last season with eight and was named to the second-team All-Horizon League.

“I definitely will be having a leadership role on the team for sure now that [Kailey]’s gone, but we have girls that will be stepping in to be a forward this year,” Meyer said.

Among the group that will see time in the forward position are juniors Shelby Wall and Annie Greene, as well as sophomores Allison King and Katie Brock.

“We feel like our program really embodies that as you start as a freshman, we want you to continue to grow and evolve both as a player and a person, so with each passing year, there is more leadership and more commitment,” Sheehan said. “Certainly Lindsey is one of those players, but we have a large group of players who continue to get better and better.”

Meyer will be one of several key contributors anchoring the midfield, along with a pair of sophomores that each made the All-Horizon League Freshman Team in Sofia Wilmes and Kaya Vogt. Wilmes was second on the team with four goals last season, while Vogt recorded two goals and started all 11 games as a freshman. Junior Kayla Wypasek and senior Ashleigh Cronin will also play crucial minutes at the midfield position in 2021.

“I haven’t set any individual goals yet, but I definitely would like to score a few more goals than last year and keep my assists the same,” Meyer said about her individual success entering the fall season.

Meyer (Highlands), Wilmes (Colerain) and Vogt (West Clermont), in addition to several other players, all came to NKU from local high schools, a trend that Sheehan and his staff have embraced since the program began: recruiting locally and keeping these talented players close to home.

“Cincinnati’s a hotbed, it’s a tremendous soccer area,” Sheehan said. “We’ve really done well since the inception of the program in 1997 recruiting Cincinnati.”

The Norse were picked to finish second in the Horizon League preseason poll, and behind a strong group of returning contributors and talented newcomers will be looking to return to the NCAA Tournament for the first time since 2016 and make their second trip to the tournament in the Division I era.

“I feel like we’ve been working for it and we’ve progressed every year and made it a little bit further, so hopefully this is the year where we make it to the NCAA Tournament,” Stines said.