Wellens, Robinson, and Bufton all score in home opener 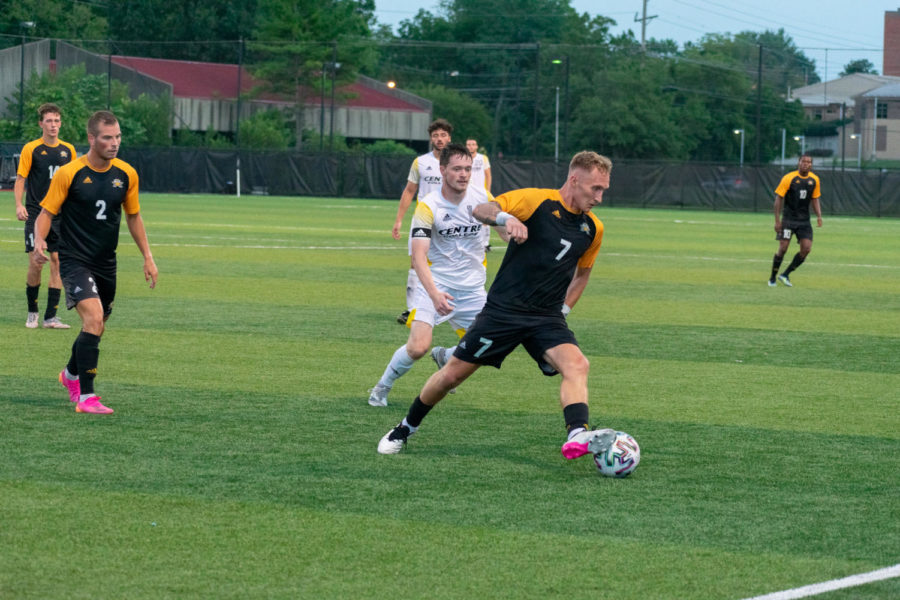 The Northern Kentucky men’s soccer team defeated the Centre College Colonels on Saturday night at the NKU Soccer Stadium. With the win, the Norse level their record at 1-1.

The Colonels held possession for the first five minutes of the game, but a staunch Norse defense ensured that the Centre attack didn’t amount to anything.

NKU began to apply pressure after a Centre corner kick in the fifth minute. The Norse worked their way down the field before Jesse Randall fired a shot over the goal. That shot by Randall sparked the Norse offensively. Just two minutes later, Craig Wellens scored the first goal of the game, firing over the outstretched arms of Centre goalkeeper Hayden Korfhage. The assist was given to Ryan Godding, who set Wellens up after a back-and-forth exchange in the 18-yard box.

The best chances of the first half for Centre came in the fifteenth and seventeenth minutes, but the Colonels offense was foiled by an offsides call and a kick-save by NKU goalkeeper Daniel Bermingham.

For the remainder of the first half, NKU continued to build an advantage with steady ball control and precise passing. After a breakthrough chance in the 23rd minute by Dylan Bufton, the Norse netted a second goal in the 28th minute after Sam Robinson received a through ball from Bufton and slotted it past Kolfhager.

NKU outpaced Centre in the first half in every offensive category, including 12-4 in total shots, 5-2 in shots on goal, and 4-1 in corner kicks.

Coming out of halftime, the Norse continued to put on a clinic on both ends of the field. Bermingham was tested only once in the entire second half thanks to the Norse defense holding Centre to just two shots in the final 45 minutes. Not allowing a goal was a priority for both the team and head coach Stu Riddle after allowing three goals to UNC-Asheville just two days prior.

“We kept a clean sheet, which we desperately needed to do.” Riddle said.

NKU grabbed a third goal in the 66th minute after Centre misplayed a header in the midfield. Jesse Randall seized possession and passed ahead to a surging Bufton, who dribbled around Centre’s keeper and calmly slotted home the final Norse goal of the night. The third goal was a manifestation of Riddle’s halftime speech to the team.

“Let’s put away the fact that we were two-nil up.Let’s have a nil-nil mentality and go and win the second half.”

Even after the final tally, the Norse kept their foot on the gas. At the final whistle, NKU held a 23-6 advantage in shots and 11-3 lead in shots on goal. The Norse offense forced a trio of Centre keepers into eight saves for the entire game, while the defense only allowed one shot on goal in the second half.

“I’m very proud of the boys. Everyone performed exactly what they needed to do.” Bufton said.

The Norse travel to Tulsa for a contest against Oral Roberts on Sep. 3 before returning home to face Virginia Military Institute on Tuesday, Sep. 7 at 1 p.m. That game can be seen on ESPN+.