In other Norse news, President Vaidya named chair of Board of Directors 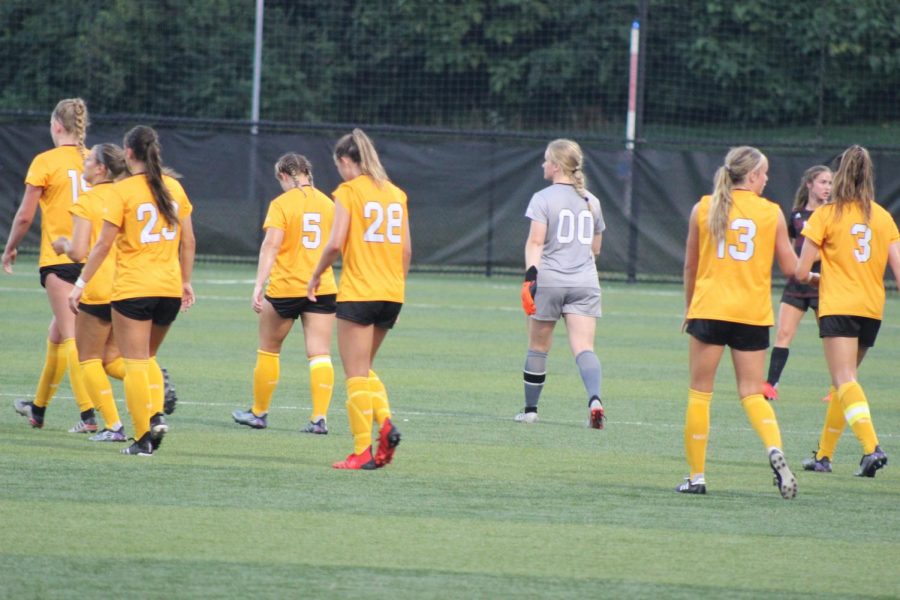 Members of the NKU women’s soccer team walk back on to the field following a break in the action against Eastern Kentucky.

After going 1-2 in three exhibition matches to begin the season, the Northern Kentucky men’s soccer team traveled to North Carolina on Thursday to battle the UNC-Asheville Bulldogs.

The Norse fell into a 3-0 hole, and despite a ferocious late rally in which NKU was able to trim the UNCA lead to just one goal, the Norse ran out of time to finish the effort, falling 3-2 on Thursday afternoon.

The scoring got started in the 14th minute when UNCA freshman midfielder Jarron James connected on an early goal, courtesy of assists from Jake Kemhadjian and Conor Behan.

Just after halftime, the Bulldogs would notch another goal on the scoreboard, this time courtesy of a misplayed ball by the Norse in the box, resulting in a team goal for UNCA and giving the Bulldogs a 2-0 advantage.

Just over ten minutes later, Behan, the sophomore midfielder from Ireland would add to his impressive performance, scoring an unassisted goal in the 57th minute and stretching the Bulldogs lead to a commanding 3-0.

Despite early struggles, the Norse did not go down without a fight, netting a goal in the 82nd minute from redshirt freshman Jesse Randall off an assist from Ryan Godding.

Just three minutes later, Randall would strike again, this time taking a penalty kick after a UNC Asheville foul in the box, and slotting it into the net. Randall’s two late goals were the first goals of his career.

Now 0-1 in the regular season, the Norse return home for a quick turnaround on Saturday, facing off against Centre College at NKU Soccer Stadium.

After a gut-wrenching overtime victory on Sunday against Eastern Kentucky, the Northern Kentucky women’s soccer team found themselves on the opposite side of an overtime match on Thursday, falling to Dayton on the road 2-1 on a penalty kick golden goal.

The score remained deadlocked at zero before the 38th minute, when NKU junior midfielder Kayla Wypasek slotted the ball into the back of the net, pushing the Norse ahead just before halftime.

For over 40 minutes of action, the score remained the same, before Dayton was able to land the equalizing goal courtesy of Itali Gemelli in the 82nd minute.

The match would head to overtime, but after just three minutes, the Norse were whistled for a foul in the box, giving the Flyers a penalty kick opportunity that they did not miss. Dayton senior Lexy Kidd took the shot and snuck the ball past NKU goalkeeper Mimi Stines, delivering the win for the Flyers, as they improved to 3-0 on the season.

In total, Stines saw 23 total shots in between the posts for the Norse, making seven five saves.

With the loss, the Norse fell to 1-2 on the season, with last week’s win over EKU sandwiched between losses to Cincinnati and now Dayton.

The Norse are back in action on Sunday, Aug. 29, as they travel south for a match against the Louisville Cardinals.

Vaidya, NKU’s president since 2018, had previously been serving as the vice president for the Board of Directors the last two years. Additionally, Vaidya also served as a member of the NCAA’s Presidential Forum from 2018-2021, assisting the NCAA Division I Board of Directors and helping to ensure that the NCAA’s core values are carried out.

“We are very excited about the new leadership coming in at the top of our governance structure as this is a group of dynamic individuals at the Board and Council levels who are taking on a leadership role in the League at a very important time in college athletics,” Horizon League Commissioner Julie Roe Lach said in a statement from the Horizon League.