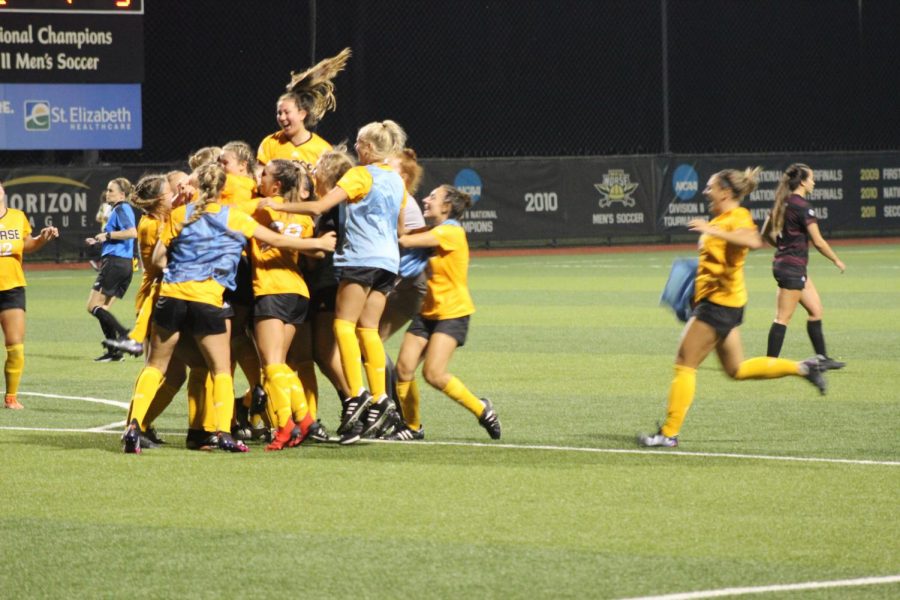 For the second straight match, the Northern Kentucky Norse women’s soccer team found itself in an early hole at halftime, trailing Eastern Kentucky 1-0 at the break on Sunday night, after previously trailing Cincinnati 2-0 at halftime on Thursday.

The second-half comeback effort fell short against the Bearcats in a 2-1 defeat, but the Norse didn’t let history repeat itself on Sunday night at NKU Soccer Stadium, surging back to beat Eastern Kentucky 2-1 in overtime, capped by a golden goal by senior Chloe Mills in the 94th minute.

“I think our mentality changed, our attention to detail changed and our commitment to the game, and I can’t say enough about the group that we have,” head coach Bob Sheehan said.

The game-winner for the Norse came on a corner kick, as senior Morgan Jewell placed the ball perfectly for Mills, who was able to head it into the net, sending the Norse and their fans into pandemonium as the bench stormed onto the field to celebrate an emotional first victory of the 2021 fall season.

“We have great corner kickers, and Morgan played an awesome ball and as soon as my head touched the ball, I knew it was going in,” Mills said.

At the end of the first half, Eastern Kentucky held all the momentum, and were playing like a team capable of coming into Highland Heights and escaping with an early season road victory. The Colonels outshot the Norse 9-2 in the first half, with one of those shots finding the goal in the 11th minute, courtesy of freshman midfielder Nerea de Diego.

“That was a big part of our team in the spring is how we defend, and we don’t give up goals in the flow of play,” Sheehan said. “Obviously, I think we’re still a work in progress this year, only being together for two weeks, so there’s a lot of defensive principles that aren’t ingrained yet, and we’re going to have some time with the team to work on those things.”

In addition to holding the Colonels without a shot in the second half and overtime, the Norse were able to record 11 shots of their own in that time, including the equalizer by sophomore midfielder Sofia Wilmes in the 70th minute. After a battle for their ball near the goal, Eastern Kentucky goalkeeper Marah Krick drifted from the net, and with just enough speed on it, the ball rolled past the goal line, evening the score at 1-1.

After Wilmes’ goal, a 20-minute stalemate would follow, sending the Norse into their first overtime match since their loss to Milwaukee in the Horizon League tournament championship game last April.

Just under five minutes into the start of the overtime period, Mills received the corner kick and in one fell swoop, the Norse had evened their record at 1-1 to begin the season.

“Honestly, it’s great, last year we only got nine games and so the more we can play, the better we can get, and obviously we have a lot of things to work on but I think tonight’s a good start,” Mills said.

After opening the season with two consecutive home games, the Norse will hit the road next week for the first time this fall, and will face off against two of the better teams that they could see all season. NKU will travel to Dayton, Ohio to face the Flyers at Baujan Stadium, before then heading south to battle the Louisville Cardinals, a member of one of the strongest conferences in the sport, the ACC.

“Obviously we have great opponents coming up and I think no matter what, the more we work on stuff the better we’re going to get, so I think these games are going to be awesome for us going into conference play later in the year,” Mills said.