Norse look to bounce back in regular season opener 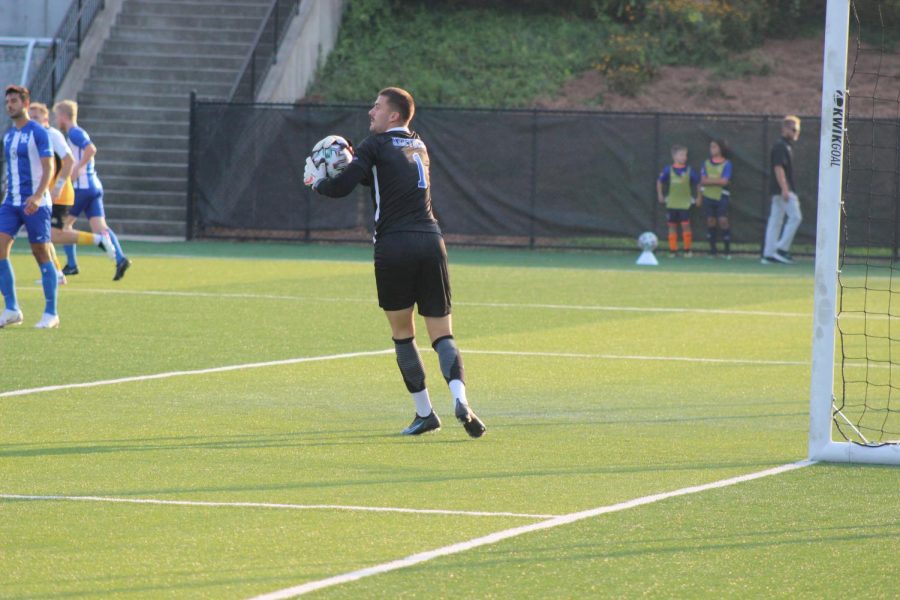 The Northern Kentucky men’s soccer team concluded their preseason schedule with a setback against the visiting Kentucky Wildcats on Friday night at the NKU Soccer Stadium.

The Norse began the game aggressively, with Sam Robinson getting two shots on goal in the first four minutes. However, Kentucky goalkeeper Jan Hoffelner was able to secure both shots, which would prove to be NKU’s only offensive action until the closing stages of the first half.

“I started off strong with the first two attacking chances, just like we wanted to. We wanted to start it off on the front foot.” Robinson said.

After a hectic start defensively, the Wildcats slowly built up an offensive attack. Precise ball movement lead to a bevy of opportunities. The first chance for Kentucky came in the sixteenth minute when a yellow card on Dylan Bufton gave the Wildcats a free kick, but they couldn’t convert.

The chances on goal continued for Kentucky, forcing Norse goalkeeper Daniel Bermingham into two first half saves. Kentucky broke through in the 33rd minute on a breakaway goal from Luke Andrews. The score came after a brief stoppage in play by the Norse when their defense saw the side official’s flag go up for offsides, but no whistle was blown, so play continued to the advantage of the Wildcats.

“We harp on it in practice every day that you’ve got to play to the whistle. Yes, the linesman’s put his flag up and indicated offside and then put it down. But you can’t just stop.” head coach Stu Riddle said.

The Norse created more chances in the final 10 minutes of the first half, but were only able to produce one shot on goal, a strike from Brodie Shallows that was easily corralled by Hoffelner. Overall, Kentucky had eight shots to NKU’s three, but the teams were even with three shots on goal apiece.

Kentucky continued to apply pressure in the second half. The Wildcats got two shots on goal in the first six minutes of the half, including one that was saved off the goal line by defender Sam Nwosu. After three straight corner kicks by UK in the 57th and 58th minutes, NKU had multiple looks at goal, but failed to capitalize.

Kentucky added to their lead in the 73rd minute on a corner kick header by Luis Grassow. After taking a 2-0 lead, chances were few and far between for both sides until the final whistle sounded.

“Since we haven’t played together for quite a bit, I think we’re still working out some kinks, but it’s coming real soon.” Robinson said in reference to the team’s chemistry.

Kentucky outshot the Norse by a total of 19-5 and forced goalkeeper Daniel Bermingham to make seven saves on 10 total shots on goal.

“We were given the absolute run-around, and it’s probably the lesson that we needed before we open up next week,” Riddle said.

The Norse begin their regular season on the road against UNC-Asheville on Thursday,  Aug. 26.