The story of how the Norse forward found his college home 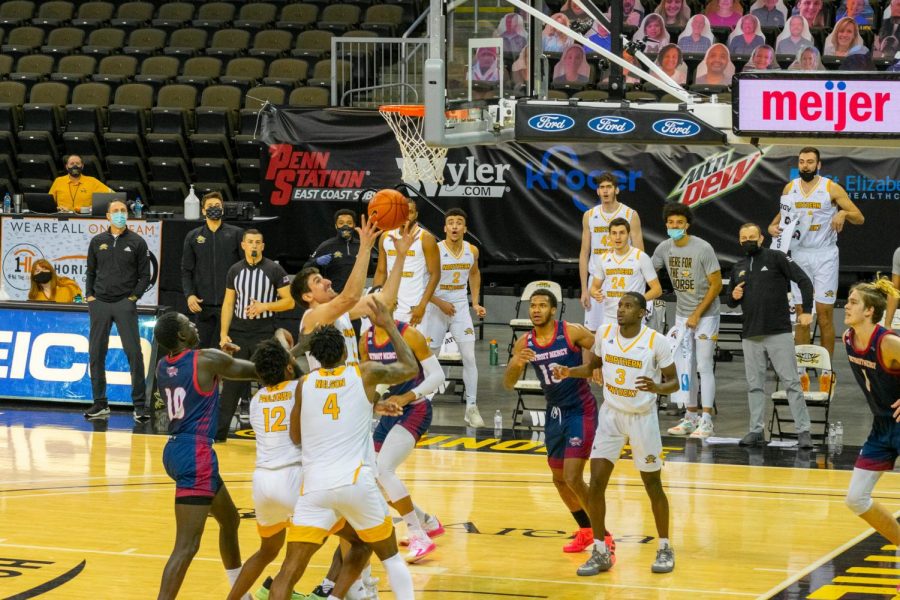 David Bӧhm tips the ball toward the basket, eventually scoring the game winner at the buzzer to lift the Norse over Detroit Mercy.

It was the shot and the moment that will likely be remembered for a long time as the play of the year for the 2020-21 NKU men’s basketball team.

With the seconds ticking down on the clock during NKU’s Horizon League Tournament quarterfinal game against Detroit Mercy, freshman forward David Böhm crashed the boards off of a Marques Warrick missed shot, tipped the ball toward the basket three times with no avail, but finally connected on the fourth attempt as the buzzer sounded, propelling the Norse to the Horizon League Tournament semifinals in Indianapolis.

For Böhm, and to the rest of the NKU coaching staff and team, the miraculous tip shot that eventually made its way to ESPN’s Sportscenter show was not just a crucial moment in the postseason, but a representation of the enormous potential that Böhm brought with him to Highland Heights when he signed with the Norse last April.

“For him to run in there in that moment and not just what he did, but it was literally four tries the way he did, and I just think it was a fruition for him for the hard work that he had put in, and the things that we had been challenging him to do,” Head Coach Darrin Horn said.

Böhm did not take the typical path that most NKU student-athletes, or even student-athletes in general endure to reach their destination. The 6’9” forward hails from Prague, Czech Republic, where Böhm first started playing the game of basketball when he was about seven years old.

Böhm said that while basketball in the Czech Republic is not as popular of a sport or activity as it is in the United States, he used to watch the NBA when he was growing up, as well as the Czech Professional League, the NBL, or National Basketball League.

After playing for the U19 Czech Republic National Team, SKU Prague, where Böhm averaged over 18.0 points per game as a teenager, Böhm spent his senior season at Montverde Academy, a prestigious prep school in Florida known for having a reputation as an athletic powerhouse.

During his time at Montverde, Böhm said that he was able to share the practice courts with several players who will likely hear their name called this July’s NBA Draft, including the frontrunner for the number-one overall pick Cade Cunningham, who played college basketball at Oklahoma State in 2020-21.

“We had a tournament in Massachusetts, and that is when I first heard about NKU, from Coach Horn and the staff, and that’s when the relationship started to build up,” Böhm said.

When Horn first saw Böhm play on video, the NKU head coach said that he saw many of the same traits that he and his staff like about the forward now, heading into his sophomore season.

“He had great size and versatility, he’s really, really skilled, and could score the basketball,” Horn said about his initial thoughts on Böhm.

When Böhm ultimately made the decision to take his talents to Highland Heights and join the Norse, he described the difficulty of not being able to visit schools, as the pandemic had forced him back home to the Czech Republic at the time of his decision. However, despite the relative unfamiliarity with the campus, Böhm felt confident that NKU was the best place for him to continue playing basketball at the collegiate level.

“I just picked the situation that I felt most comfortable with, and coaches that I believe the most and trust the most,” Böhm said.

Upon arriving on campus in the fall of 2020, Böhm initially struggled with acclimating to his new life at NKU, as the pandemic took away the traditional college experience that new students received during their first semester, complete with events that allowed students to meet their fellow classmates and create meaningful relationships with one another.

“At the beginning, it was pretty hard for me, because of all the cultural differences and language differences, so it was hard for me for the first couple of months,” Böhm said.

On the court, Böhm was able to acclimate quickly for the Norse, and instantly became a prime contributor within the first few games of the 2020-21 season.

In just his second game of his collegiate career against Tennessee Tech on Dec. 3, Böhm played 24 minutes off the bench, scoring 12 points while grabbing four rebounds.

The next week, Böhm scored eight points during a loss at Dayton, followed by a career-high 19 points on the road at Kent State, a performance that earned him Horizon League Freshman of the Week honors.

During three straight games in January, two of which came at home during a weekend series against conference foe IUPUI, Böhm recorded three straight double-digit scoring performances, capped off by 16 points in a win over Robert Morris.

However, like many fans and people within the program who witnessed the play live and continue to relive it over three months later, Böhm’s most memorable moment of the 2020-21 campaign was the miraculous buzzer-beater over Detroit Mercy that sent his teammates into pandemonium and secured the Norse a spot in the Horizon League semifinals.

“I just went from my instincts that I learned in practices, because we did situations like that everyday to play to the last shot, to the last possession,” Böhm said. “We did it from August until the last practice before the end of the season, so it was just natural for me to follow my instincts and do what we practiced before.”

On Thursday, the NKU men’s basketball Twitter account posted a video of Böhm announcing that he has received the opportunity to try out for the Czech Republic National Team and Czech National U20 Team.

“I think that is a result after the work I’ve put in over the year and how I worked hard over the years, so that is just some sort of result after all that and I’m so excited to go back home and show back home what I learned over here throughout the year,” Böhm said in the video.

In a basketball career that began on another continent, made a pit stop at one of the most prestigious prep schools in the United States, and eventually made its way to NKU, the magnitude of the buzzer-beating shot and the impact that it had on Böhm has not been lost.

“Probably the best moment of my basketball career, for sure,” Böhm said.