The program had a very successful first year at NKU 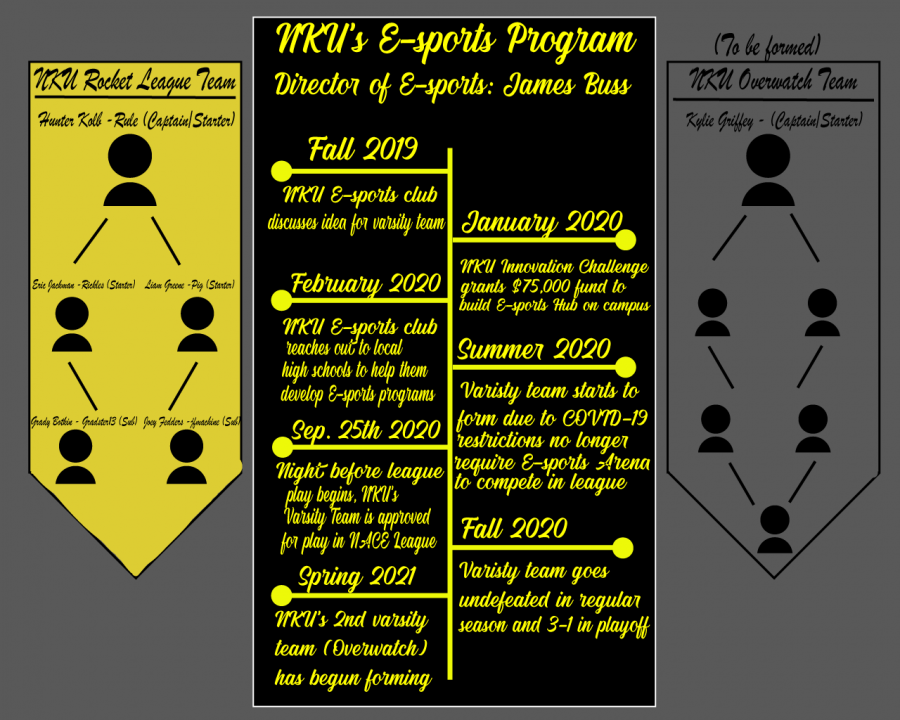 An infographic depicting the timeline for NKU Esports over the last few years.

Over the past year, NKU has seen the rise of its Esports program in ways few might have seen coming. At this time last year, NKU’s Esport Club had just received a $75,000 grant from NKU’s Innovation Challenge to build “The Sandbox”, NKU’s Esports home for not only its varsity team but also for any students who might want to broadcast or create content centered around Esports at NKU. This grant was the result of a team of faculty, students, and staff headed by Dr. James Buss, NKU’s director of Esports. At the time, this was a milestone towards NKU being able to form its own varsity Esports program once The Sandbox was completed.

“I led a team of about twenty faculty, students, and staff to develop a pitch proposal to the University for a potential esports program,” Buss said.

Buss mentioned that at the time, The National Association of Collegiate Esports (NACE) required teams to have an Esports hub that would house teams for play throughout the course of the season. When the COVID-19 pandemic struck, NACE lifted that restriction for the upcoming fall 2020 season. This allowed Buss and those involved in the Esports Club to start recruiting for the formation of a varsity Rocket League team. NKU’s club Rocket League team at the time was spearheaded by junior computer information technology major Hunter Kolb.

“I started out my freshman and sophomore years as the captain for our club team, then when we formed our varsity team last year I became the captain of that,” Kolb said.

Kolb and Buss said the process of recruiting for what would become the varsity team began months earlier when the Esports club reached out to local high schools to develop their Esports programs. When these students graduated from local high schools, they went on to attend NKU and take part in the Esports club. Four out of the five members of the current varsity team are freshmen who benefited from this outreach.

Buss mentioned the day the varsity team got approved was the night before the NACE fall league started its play.

“I remember I was on the phone with the commissioner in my car in the parking lot of UDF talking with him to get our team approved on time,” Buss said.

According to Buss, with the varsity team approved to play for the 2020 season, Kolb and his teammates met each other in person for the first time despite playing with each other for months. Despite these hurdles of the pandemic, an Esports team can easily practice together without ever interacting in person with one another. The team was able to take full advantage of their situation and quickly began to make their mark on the varsity stage,quickly earning a spot in the Collegiate Rocket League (CRL) Wildcard playoff.

“Last fall we went undefeated in the regular season, went 3-1 in the playoffs which gave us some national attention, and we were able to say, hey we can compete with the big dogs who have been around for years, and we’ve only been here for four months,” Kolb said.

Buss said there was a remarkable effort and amount of time devoted by the players of the varsity squad to achieve these milestones in only a few months together. The team members do not have time to play other games and also need to find time to manage all of their school work, all while competing to represent the university in a professional manner.

With the recent success of the Esports program here at NKU, an Overwatch varsity team has begun forming as well. The current team captain is Kylie Griffey and she and the rest of those involved with NKU Esports are busy recruiting students who are interested in representing the university’s Esports varsity program. Buss hopes that with the Sandbox opening to all students who want to use it in the fall of 2021 will give many students the opportunity to share their passion for Esports.

“It’s about more than students playing games, it’s a way for students to broadcast themselves and get internships for those who want to go into this industry,” Buss said.

Currently, NKU’s Esports Club has over 500 students and several competitive club teams in games including Rocket League, League of Legends, Hearthstone, Valorant and Call of Duty, as well as many more.

Additional information about how to be a part of NKU Esports can be found on NKU.edu/esports or the NKU Esports Discord Server using code: AGUTX9E, or through their twitter account: @nkuesports.