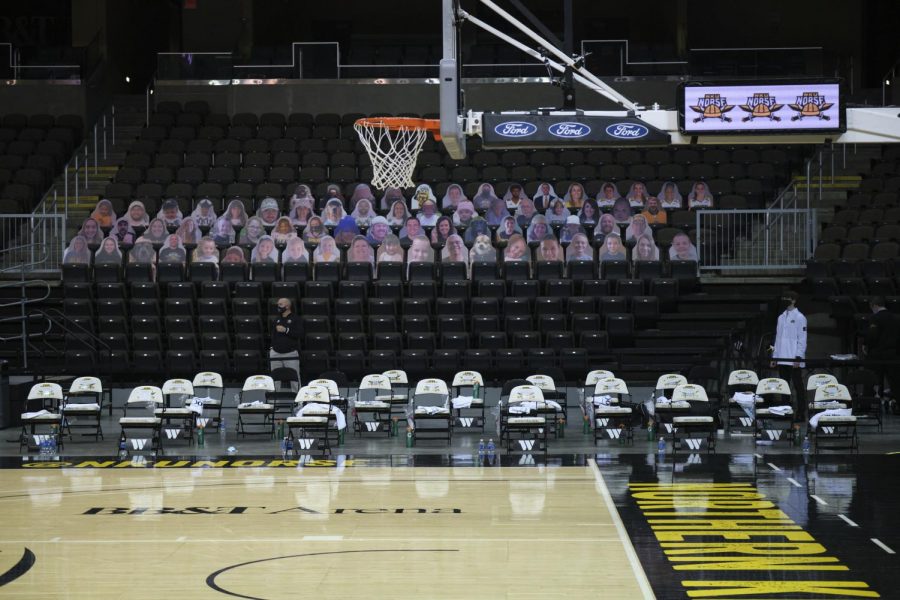 NKU and BB&T Arena are offering fans the opportunity to buy a cardboard cutout of themselves to place in the stands during home games.

How NKU Athletics has been hit by the pandemic financially

Due to the COVID-19 pandemic that began to spread across the United States and the rest of the world last year, the NCAA experienced a $600 million drop in revenue from 2019, due in large part to the cancellation of the 2020 Division I men’s basketball tournament, which was a key source of revenue from television deals, marketing rights and ticketing.

However, due in part to the extravagant television deals that the NCAA has with both CBS and Turner Sports, the losses that the NCAA had to endure were able to be recouped and will eventually stabilize as the revenue streams continue to pour in.

At a school such as Northern Kentucky University, however, whose men’s basketball team was slated to participate in the 2020 men’s basketball tournament before it was canceled, the athletic department has had to be more resourceful in navigating their way through the current financial predicament that has engulfed college sports.

“It actually affected both last year’s budget and this year’s budget,” Dan McIver, NKU’s Deputy Athletic Director, said about the cancellation of the men’s basketball tournament last March.  “With last year, it mainly hit just in the NCAA distributions that we receive at the end of the year, so it affected us in the neighborhood of about $250,000 approximately.”

In May of each year, the NKU Athletic department presents its budget plan for the upcoming fiscal year to the Board of Regents. In May of 2020, the department essentially had four plans in place, depending on the circumstances surrounding fans in the stands and other athletics revenue streams at the university.

The “Plan A” or best-case scenario for NKU was to still be able to hold all scheduled events while still allowing fans into events. On the flip side, the athletic department imagined that the worst-case scenario would be that most, if not all, events would be able to take place, but without fans in attendance.

The latter scenario was essentially the one that took place in the 2020-21 season, as both men’s and women’s basketball games proceeded with no fans inside BB&T Arena while men’s and women’s soccer took place with a limited number of player family members in attendance.

As a result, the athletic department had to take steps to combat the loss of revenue from empty arenas and stadiums.

Other changes that were implemented as a result of the loss of revenue from not allowing fans included cutting the budget for marketing and ticketing, and delaying any facility upgrades that could be put off to a later date.

However, not every facility upgrade on campus was able to be put on hold until the budget was more secure.

“We really looked at what do we have to do this year from a safety standpoint, and what can we push off to next year,” McIver said. “We did have to do some turf replacement at baseball. Typically every year we have to replace the pitcher’s mound, just because of the wear and tear.”

The softball field also had to be worked on because the natural grass often gets distorted over the winter, causing a dip from the infield to the outfield that is conducive to injuries if a defensive player tried to make a play near the area.

Overall, the athletic department is projecting a hit of almost $1 million in revenue for the fiscal year, due to a combination of ticketing losses as well as numerous other factors that come with hosting a game or event.

To combat some of these revenue losses, the NKU Athletics department is once again hosting the Go Norse Fund, which is a fundraising opportunity that allows fans and donors to bid on exclusive prizes that include tickets to Cincinnati Reds games, autograph jerseys by professional athletes and more.

“There are really three main buckets that we try to raise money in, it’s our annual fund, which a lot of our annual fund benefits are tied to basketball benefits, access to our donor reception area and parking,” McIver said. “Another bucket is special events, so that is typically our golf outing that is done in June, and then our Go Norse Fund gala, which is typically held in the fall.”

The third major bucket, according to McIver, is what is referred to as major gifts.

“The first two buckets are pretty much what are called unrestricted dollars, so they just go to help support our operating expenses, but major gifts are typically restricted for certain purposes, whether that be an endowed scholarship or to a specific sport program, for a specific project, but we have had tremendous success in that this year,” McIver said.

Despite the losses that have been incurred in the last year, McIver said that NKU Athletics is surprised by the donations that have been sent to try to keep athletics afloat.

“We are currently at almost $1.2 million,” McIver said. “Big shoutout to our development staff. It has certainly not been easy raising money in a pandemic, but they have done one heckuva job during the last year to raise money and help keep us minimizing our actual loss.”