NKU men’s team advances to final due to COVID-19 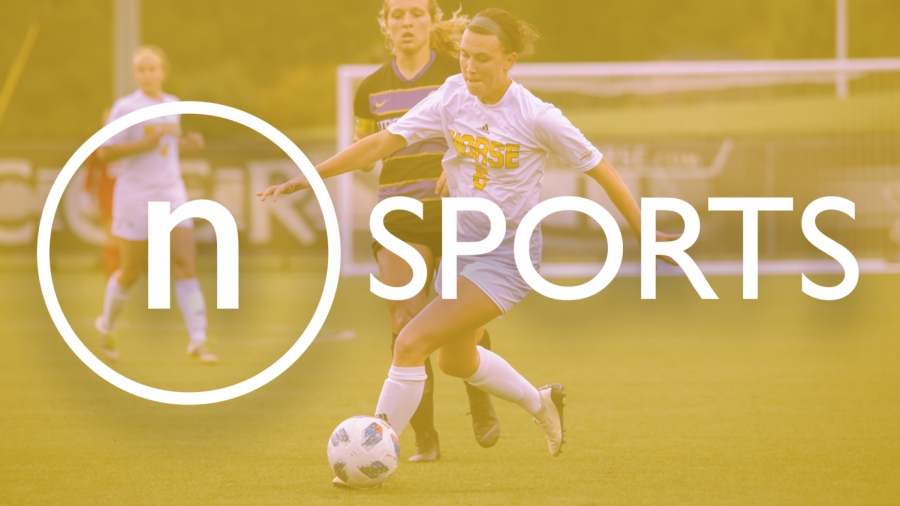 On a chilly and rainy afternoon at NKU Soccer Stadium, the Northern Kentucky women’s soccer team continued their defensive brilliance that they have consistently brought in 2021, defeating the UIC Flames 3-0 in the Horizon League Tournament semifinals.

With the victory, the Norse advanced to the Horizon League Tournament championship game, when they will meet the Milwaukee Panthers, who beat the IUPUI Jaguars in the other semifinal matchup on Sunday afternoon.

The scoring got started early for the Norse, as junior forward Kiley Keehan received an assist from forwards Kailey Ivins and Lindsey Meyer, dribbled the ball past the goalkeeper in the box with a deceptive move, and slotted the shot into the lower center of the goal for her first career goal at NKU, pushing the Norse ahead 1-0.

“Before the game started, we all talked about scoring in the first five to ten minutes in the game, to just get the game going, and I think when Lindsey played it in, I was a little nervous but I scored and I think that picked up the team and set the tone for the rest of the game,” Keehan said.

Keehan was a sophomore when the Norse were knocked out of the 2019 Horizon League Tournament by the Flames in a 1-0 overtime match in Milwaukee.

“We just wanted to win again, and wanted to get payback for that loss,” Keehan said. “It was a very difficult game to play in, and the circumstances were not on either of our sides, but I think today was a good win for us, and it was good payback for them.”

The Norse held a decisive shot advantage in Sunday’s game, taking 11 shot attempts, including seven on the goal, while the Flames recorded just five total shots, with none of them finding the back of the net. Additionally, UIC was whistled for 16 fouls, compared to just eight for NKU.

With the shutout, the Norse extended their streak to six consecutive matches without conceding a goal. Sunday’s game also represented NKU’s seventh shutout of the 2021 spring season.

“I thought we defended really, really well, that’s been one of our identities all year,” Head Coach Bob Sheehan said. “We’ve continued to grow and build on that identity.”

Many of the defensive achievements that the Norse have accomplished this season can be attributed to the play of junior goalkeeper Mimi Stines, who on Thursday, took home the Horizon League Goalkeeper of the Year award, as well as the Horizon League Defensive Player of the Year. On the season, Stines has collected 32 saves, while holding opponents to a 0.30 goals against average.

“I think all year defensively, we’ve been lights out. I’ve had very few shots on me in goal and that is a testament to how hard our team has worked defensively, and it starts up top with our forwards and all the way back to our back line, who’s been tremendous this year,” Stines said.

In the second half, after successfully responding to a more aggressive attack from the Flames, the Norse were able to add several insurance goals, one courtesy of the Horizon League Player of the Year Ivins.

In the 73rd minute, Meyer dribbled the ball down the side of the box, found Ivins in the middle and the senior blasted the ball into the net, pushing the Norse ahead 2-0.

Less than five minutes later, freshman midfielder Sofia Wilmes all but guaranteed that the Norse would be playing for the championship on Saturday, as Wilmes took a pass and took a shot that deflected off the post, and rolled into the net past UIC goalkeeper Lena Kurz.

As the Norse prepare to meet Milwaukee on Saturday for the Horizon League Championship, Sheehan and his staff said that the focus in practice will be on both individual and team defense, and also being able to manufacture goals in timely situations.

“We’re not finished yet,” Sheehan said. “Obviously, one of our goals is to win the Horizon League championship and I think that’s a goal that is very important to this team.”

The Northern Kentucky men’s soccer team was scheduled to play in the Horizon League Tournament semifinals at 5:00 p.m. on Sunday, following the women’s game, but due to a COVID-19 issue within Wright State’s Tier 1 personnel, NKU’s scheduled opponent, the game was cancelled.

As a result, NKU advances to the Horizon League championship game, and will take on Milwaukee as well.