In appreciation of the NCAA Tournament 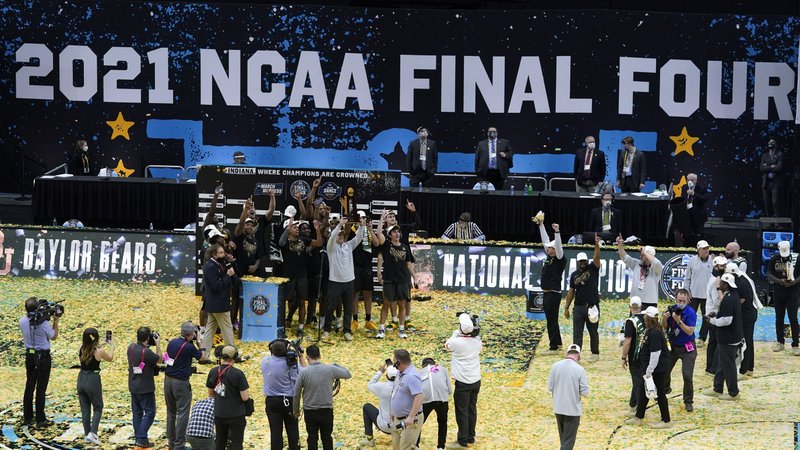 Members of the Baylor men’s basketball team celebrate a National Championship game win over Gonzaga on Monday, April 5. The Bears won the 2021 championship over the Bulldogs, 86-70.

It is regarded by many as the greatest sporting event on Earth, and each March that claim is substantiated time and again. There are not enough words or emotions to encapsulate these three weeks in March and early April. But in the end, it may just boil down to the moniker first used in 1932 and made popular by Brent Musberger in 1982:

Yes, this tournament was different from previous iterations because of COVID-19 precautions, but there were many positives to come out of it. The entire tournament was played in the state of Indiana (all within 70 miles of Indianapolis, to be exact). Sure, the Hoosier State is home to NCAA headquarters, but is also considered the center of the basketball world. The First Four games this year were all held on one day instead of the usual two, leading to the highest rating ever for the play-in contests between four No. 11 seeds and four No. 16 seeds. Multiple on-campus arenas were utilized, a practice not seen since the mid-2000s. Indiana’s Simon Skjodt Assembly Hall, Purdue’s Mackey Arena, and Butler’s Hinkle Fieldhouse provided a more intimate feel than the typical city-center arenas and football stadiums. And if you haven’t seen pictures of the reflection on the Hinkle Fieldhouse court as the late afternoon sun shines through the building’s windows, check them out. It’s a magical sight.

Let’s move on to the action, shall we?

Almost every game of this tournament carried an historical anecdote, from teams winning their first ever game to Cinderella runs. All in all, there is too much history to mention here, but here’s a small taste. The Sweet 16 had the highest seed total (94) and seed average (5.86) EVER. After a lackluster regular season, the PAC-12 Conference placed three teams in the Elite Eight for the first time since 2001. By definition, an upset is when a team beats another team that is five seed lines or higher. The previous tournament record for upsets was 13. This year’s iteration had 14, with 11 happening in the first weekend alone.

Every year, heroes emerge and create national storylines. There was Oral Roberts, with college basketball’s leading scorer Max Abmas and running mate Kevin Obanor. The Golden Eagles used three-point shooting to upset 2-seed Ohio State and 7-seed Florida to become only the second 15-seed to ever make the Sweet 16 (Florida Gulf Coast, 2012). Joe Pleasant shot 52% from the free throw line all year, but knocked down two with 1.2 seconds left to give 14-seed Abilene Christian its biggest win in school history in an upset over 3-seed Texas. Jason Preston, a junior for the Ohio Bobcats, averaged 2.2 points per game as a senior in high school and held only two Division 1 scholarship offers. He led the Bobcats to an upset of defending national champion Virginia. The Loyola University of Chicago Ramblers and Sister Jean (their 101 year-old team chaplain and good luck charm) used their top-ranked defense to defeat Illinois, only to be defeated in the Sweet 16 by an even more unlikely Cinderella in Oregon State.

The story of the tournament may have been the UCLA Bruins. Mick Cronin’s team entered the  tournament after a season filled with adversity. Top recruit Daishen Nix had committed to UCLA, but opted instead to join the NBA G-League. Senior leader Chris Smith tore his ACL one month into the season. Jalen Hill opted out of the season due to personal reasons. The Bruins entered the tournament on a four-game losing streak and were placed in a First Four game against fellow blue-blood Michigan State. At one point, UCLA trailed by 14 but came back to defeat the Spartans in an inspiring effort. With Kentucky transfer and hometown kid Johnny Juzang leading the way, UCLA rattled off wins against 6-seed BYU, aforementioned Abilene Christian, 2-seed Alabama (in overtime), and 1-seed Michigan to reach an unprecedented Final Four. The Bruins’ reward for reaching such a grand stage?

The Zags entered the tournament as the No. 1 overall seed, undefeated in 30 games, and boasting the nation’s top adjusted offensive efficiency rating (per kenpom.com). Many expected Gonzaga, with stars such as Corey Kispert, Jalen Suggs, and Drew Timme to easily defeat the Bruins. But David pushed Goliath, not only to overtime, but to the final buzzer. Jalen Suggs banked in a 40-foot buzzer-beater that carried a magnitude not seen since Kris Jenkins in 2016; not seen since Christian Laettner in 1992.

What it all came down to, though, was the most anticipated National Championship in years. Preseason No. 1 Gonzaga versus preseason No. 2 Baylor. Gonzaga entered undefeated; Baylor could have as well, if not for a mid-season pause due to COVID-19 that shut the Bears down for nearly three weeks. The Bears and Zags were scheduled to play on Dec. 5 in Indianapolis, but the game was canceled due to COVID-19 issues. That game had the same level of hype and anticipation. The same two teams met four months to the day in the same city for the national title.

Sadly, Baylor versus Gonzaga didn’t quite live up to the hype and anticipation. With stifling defense and poetic offense that led to a 16 point win, Baylor ensured that the 1976 Indiana Hoosiers would remain the most recent undefeated National Champion.

The true finale to this tournament is not the championship game; it is One Shining Moment. Lest we forget the events of the past three weeks, David Barrett’s magnum opus offers a chance to relive the entire tournament in a matter of minutes. The song and video is the one constant from one year to the next, but it never gets old.

There was only one thing about this NCAA Tournament that we all wish could have been better. Due to COVID-19 restrictions, the Final Four and National Championship game inside Lucas Oil Stadium were limited to only 8,200 fans in attendance. The only thing that would have made the epitome of the greatest sporting event on Earth any better than it already was would be a packed house (Lucas Oil Stadium has a capacity of 70,000 people). But alas, we can only imagine.

After two years of waiting for March Madness to return, this was indeed the tournament we needed, but it also gave us everything we deserved and desired.