Norse clinch the top seed in the Horizon League Tournament 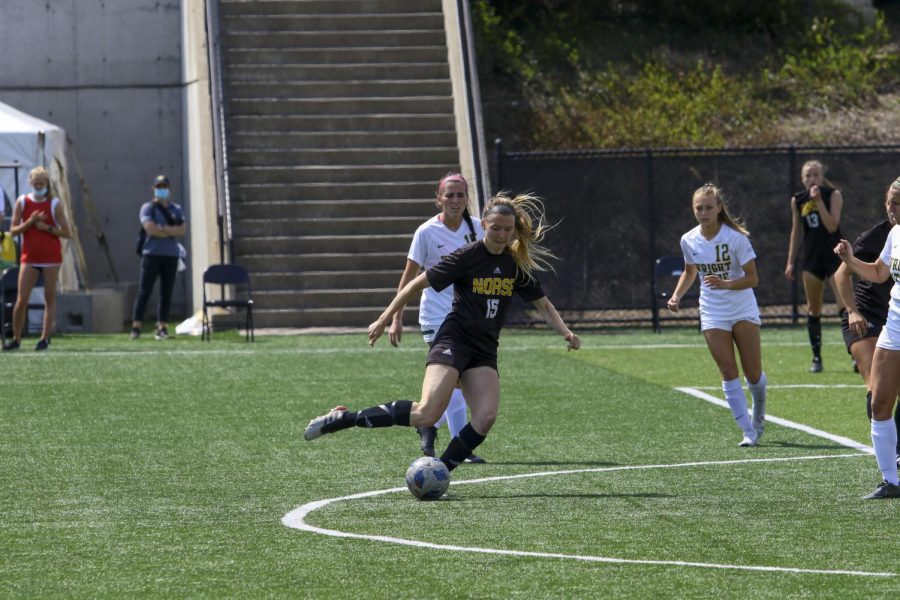 Kailey Ivins with the ball against Wright State on Monday. Ivins scored the go-ahead goal on her Senior Day in the 2-0 victory.

The Northern Kentucky women’s soccer team concluded their extraordinary regular-season performance with yet another dominant effort on Monday afternoon at NKU Soccer Stadium, defeating the Wright State Raiders 2-0. With the victory, the Norse clinched the regular-season championship for the 2021 spring season, and have earned the top seed for the Horizon League Tournament.

The match began with a defensive battle, as neither team was able to attack the opposing box with much success. Between the two teams, there were just four shots taken in the first half, three of which were taken by the Norse. There were nine total fouls called in the first half as well, partly as a result of the defensive intensity displayed by both teams.

The Norse would come out firing in the second half though, as senior Kailey Ivins, who was recognized before the game in Senior Day festivities, along with fellow senior Megan Patrick, broke free from the defense, and scored an unassisted goal in the 48th minute, pushing NKU ahead 1-0.

For Ivins, being able to score a goal on her Senior Day, and the game-winning one to boot, was a goal for her entering Monday’s match.

“I really wanted to get one, just kind of finishing off my four years here, it just felt really good getting that goal,” Ivins said.

The defense, which has been one of the main staples of the current six-game winning streak that the Norse are on, was terrific once again. NKU held the Raiders to just three shots all afternoon, and the WSU shots that did come near the goal were scooped up by goalkeeper Mimi Stines, who has cemented herself as a top goalie in the Horizon League with her 2021 play.

Monday’s win represented the fifth consecutive shutout by the Norse, dating back to their 1-0 win over Youngstown State on March 11.

With the defense continuing to stifle the Raiders’ attack after Ivins pushed the first goal across early in the second half, the Norse were able to add an insurance goal in the 74th minute, courtesy of sophomore forward Annie Greene, who deposited a shot into the upper right corner of the net for her first career goal.

“Lindsey [Meyer] played a great ball to Kayla [Wypasek] just put her body in front of the ball, and then I was just there to get it,” Greene said. “Honestly, it’s just a team effort and I’m just so excited to be part of this team.”

The victory, NKU’s sixth straight, handed the Norse their first regular-season championship of the Division I era, which began in 2012. NKU’s undefeated record of 7-0-1 in conference play this season is also their best mark since joining the Horizon League.

The 2021 season was a unique one for the student-athletes, with frequent testing for COVID-19, multiple cancellations early in the season, and limited fans in attendance, but Sheehan said that the Norse have shown resilience throughout the entire year, culminating in Monday’s momentous accomplishment.

“This has been a tremendous team, this has not been easy for really every team throughout the country, but this team in particular has really worked incredibly hard, they’ve been very resilient,” Sheehan said.

Sheehan also praised the two seniors who were honored during pregame festivities, Ivins and Patrick, citing their strong leadership this season.

“They set the tone for training habits and game preparation…they do so much behind the scenes just to help our younger players, and they have been incredible role models, and I couldn’t be prouder of any two seniors than Kailey and Megan,” Sheehan said. “We’re going to very much miss them, but we’re going to hang onto them a little bit longer, hopefully we’ve got a few more games in us.”