The Norse are 8-3 in the spring season 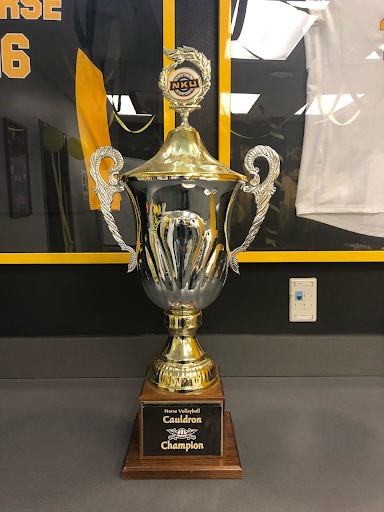 A trophy used by the NKU volleyball team.

NKU women’s volleyball team has been putting in the work to maintain their winning season this year. The Norse continue on their 8-3 season with only a few games left.

The team continues to run a 6-2 set up, with three hitters at all times, allowing for them to maintain a higher attack average than their opponents.

Junior Anna Brinkmann is leading the team with 78 kills and 10 service aces and senior Ashton Terrill is bringing the heat with 101 digs this season.

With the season being postponed to spring, it hasn’t affected the team much yet. The routine is all basically the same. There are still back-to-back matches, working out and practices that are harder than games. The biggest difference right now is that there are fewer matches than normal.

The assumption is that the transition back to normalcy will be the harder part because there will be less time to prepare for the official season. As of now, there is no set process as to what next season will look like for the Norse.

Last spring when NKU made the decision to pause everything, Hart had to also pause practice. The team did video sessions “we play games or we do baking sessions” and  “trying to do more fun things and worrying about more than volleyball and I think there are bigger things going on in the world than actual volleyball” Hart said.

While COVID has affected the way the players are able to build their chemistry, they are still doing everything they can to build that. Now players room with the same person and have assigned seats so they aren’t able to intermingle as much.

One thing that the team does to help build team chemistry is a points system, Hart said that whatever they can make into a competition, they do. This allows for the players to have that healthy competition and push each other to always be their best.

After each week, the points are then added and the top performer of the week gets the “big obnoxious trophy” as Hart described it to place with their locker.

While they work hard to maintain the team chemistry through all the changes, there has been some good as well. “COVID has taught us how much we enjoy playing the game and playing with our teammates,” senior Kaelin Gentile said.

The Norse have been putting in the hard work to get where they are in the season and to  continue to build the team chemistry which allows them to perform their best as a team.

You can catch the Norse next at Robert Morris University on March 22 at 3 p.m.