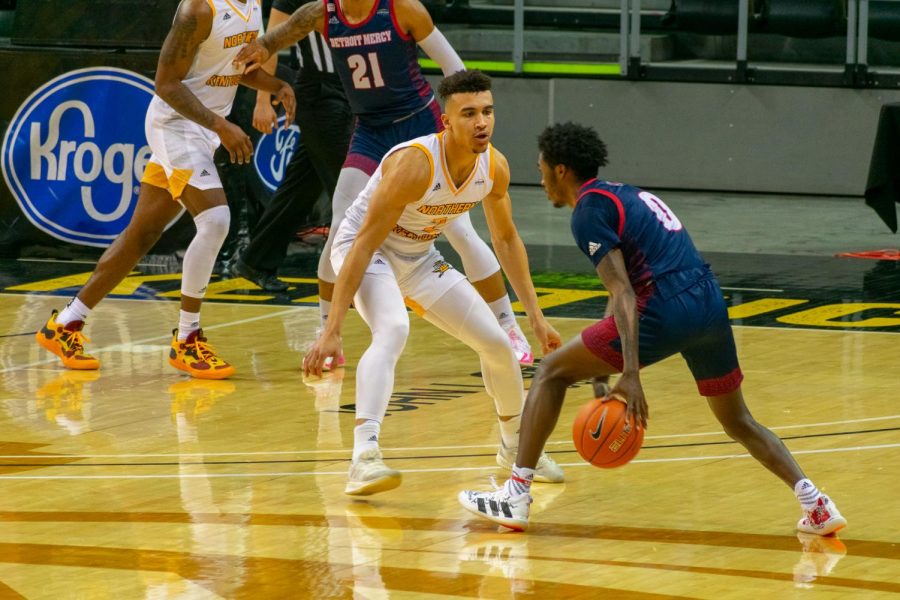 It was an ending almost too storybook (or chaotic) to be true.

The Northern Kentucky Norse men’s basketball team trailed by one, 69-68, and had the ball with just eight seconds remaining in the Horizon League Tournament quarterfinal game against Detroit Mercy at BB&T Arena.

NKU’s heralded freshman guard Marques Warrick took an inbounds pass, dribbled at the top of the key, drove to the left side of the lane and just missed a floater with four seconds remaining. But that wasn’t the end.

Inserted into the game just 11 seconds before, NKU freshman forward David Böhm was there for the rebound and tried to tip the ball back in for the lead. The attempt missed.

As time on the clock slowly ticked away, he tipped it again, missing for a second time.

But alas, the third time was the charm for the freshman from the Czech Republic.

As time expired, Böhm went for one final tip attempt to give the Norse the victory, and his persistence paid off, as the ball rolled through the net at the buzzer, sending the Norse to the Horizon League Tournament semifinals with a 70-69 win over the Titans.

“I was just thinking ‘crash the boards, see what’s in there’ and I saw that I’m open, so I just tipped it in,” Böhm said.

Warrick, just seconds after his shot attempt just missed finding the bottom of the net, watched on anxiously as the season hung in the balance, worried that time may expire before Böhm got the shot to fall.

“I was waiting for the buzzer to sound too, I didn’t know how much time was left, so it finally did and I’m just glad it all worked out,” Warrick said.

In hindsight, the first 39 minutes of action should have given the indication that something wild may occur in the final minute.

In a quarterfinal matchup between two evenly matched teams on paper, each team’s biggest lead of the night only stretched to five, and each of these leads occurred within the first 10 minutes of the first half. In addition, Tuesday’s game saw 21 lead changes and seven ties.

“It’s March. We expected nothing less than the game that was played tonight,” Head Coach Darrin Horn said.

For the Norse, one of their main concerns on Tuesday was slowing down Detroit Mercy guard Antoine Davis, who scored 46 points in Detroit Mercy’s previous game against Robert Morris last Thursday.

NKU was able to do that in the first half, using defensive traps on the perimeter and at half-court to force Davis to let his teammates shoot, including sophomore guard Noah Waterman, who recorded 11 points in the first half on 3-5 from three-point range.

As a result of their defensive effort on Davis, as well as a combined 28 first-half points from Warrick and junior guard Bryson Langdon, the Norse entered halftime with a 40-37 lead.

In the second half however, Davis showed why he was named to the All-Horizon League First Team for his regular season contributions, scoring 11 of his 16 points in the second half, including several massive threes. With just 3:45 remaining, a jump shot by Bul Kuol pushed the Detroit Mercy lead to 69-64.

The Titans would not score again.

The Norse buckled down on the defensive end, forcing the Titans into 0-4 shooting from the field in the final minutes. The Titans had a chance to stretch their lead with just 14 seconds left, but Waterman was unable to connect on the front end of a one-and-one, giving the ball back to the Norse, ultimately leading to the late heroics by Böhm.

“Give our guys credit, they got the stops that they needed to, and we were aggressive offensively during that stretch,” Horn said.

Warrick finished the game with a team-high 20 points, while Langdon had 17 while playing in all 40 minutes for the Norse. Böhm finished with 11, while grabbing eight rebounds. Junior guard Trevon Faulkner led the team in rebounds with nine.

Kuol led Detroit Mercy with 20 points, while Waterman added 19 points and five rebounds. Davis led the Titans with five assists, though he also turned the ball over five times.

With the gut-wrenching victory on Tuesday night, the Norse now advance to the Horizon League Tournament semifinals at Indiana Farmers Coliseum in Indianapolis.

“After this win, we definitely have a lot of confidence,” Warrick said. “We’re just ready to play our next opponent.”

The Norse are scheduled to play the Oakland Golden Grizzlies on Monday night, with tip off scheduled for 9:30 p.m. The game can be seen live on ESPN2.