WSU out-rebounded the Norse by a substantial 45-19 margin 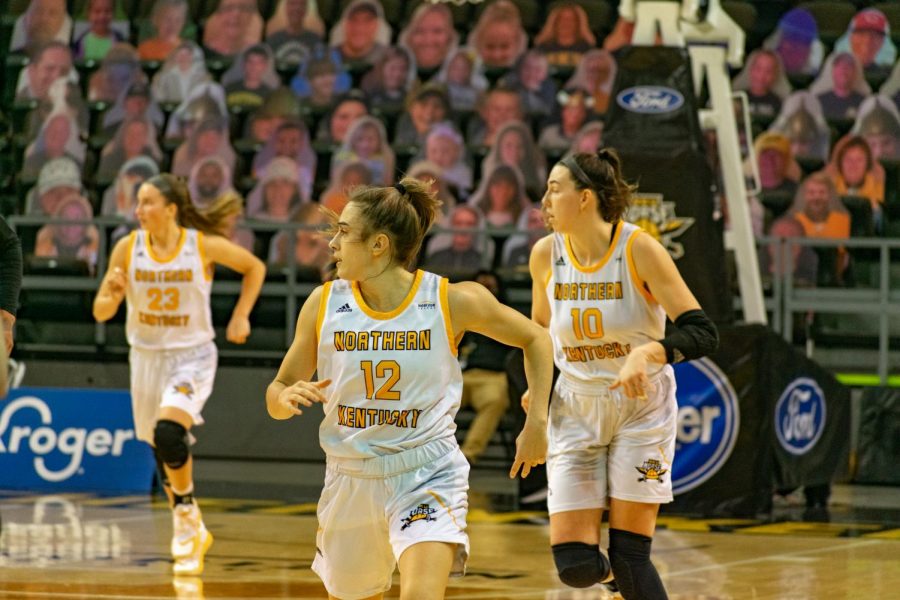 Members of the NKU WBB team look down the court as a play unfolds during Friday afternoon’s loss to Wright State.

Senior day for the Northern Kentucky Norse women’s basketball team ended rather unceremoniously for the Norse, as the Wright State Raiders cruised to the 63-54 victory, finishing off the two-game sweep.

A late, fourth quarter run by the Norse kept the final deficit within single-digits, but WSU seemed to be in control of the game for the duration of the second half, pulling their starters toward the end of the fourth quarter.

The Raiders were led by a pair of guards in Angel Baker (16 PTS, 3 REB) and Emani Jefferson (17 PTS, 3 STL) and center Tyler Frierson, who had a team-high 12 rebounds.

“I just tried to attack, I seen the open gaps and just punched the gaps, and I just shot the ball with confidence tonight,” Turner said.

A tough first quarter buried the Norse from the outset, as the Raiders were able to establish a dominant presence on the glass, eventually out-rebounding NKU by an eye-popping margin of 45-19. Wright State shot 60 percent from the field in the first quarter, headlined by five points from Baker, and four each from Jefferson and Frierson.

Unlike on Friday afternoon, when a dismal second quarter spelled doom for NKU’s chances for the rest of the game, the Norse were able to outscore the Raiders in the second quarter, 15-12, and entered halftime trailing by just six, 31-25.

But as good teams often do (and Wright State, with their 15-5 record would certainly be considered a good team), the Raiders buried the Norse in the second half with a combination of timely shooting and their aforementioned rebounding advantage to outscore the Norse 22-12 in the third quarter.

“Wright State’s really good, they’re sitting in first place for a reason, and a lot of credit to them and how they play,” Head Coach Camryn Whitaker said. “They’ve got an inside-out attack from all positions and it’s just a really tough game for us.”

The Raiders were able to successfully pound the ball inside on the Norse defense, scoring 32 of their 63 points in the paint, making up for a poor showing from beyond the three-point arc.

“That’s basically all we gotta do is try to keep the ball out of the paint, but I just don’t think we came ready to play today,” Turner said.

The Norse held pregame festivities on the court to honor the three seniors in the program: Grayson Rose, Kailey Coffey and Jasmyne Geist, albeit with the only fans in attendance being cardboard cutouts in the lower deck and a smattering of staff members and BB&T Arena personnel.

Whitaker sang praises for the three Norse seniors, who may have played their final games at home Saturday afternoon.

“Kailey, G [Grayson Rose] and Jasmyne came, they built a culture of good people, high character, hard work and that’s what I want our teams to be known for,” Whitaker said.

With their home slate of regular season games now completed, the Norse have just one more series remaining, a two-game road trip to Rochester, Michigan to battle Oakland next Friday and Saturday. Friday’s game will tip off at 7:00 p.m., while Saturday afternoon’s contest is slated to begin at 3:00 p.m.