Team earned their first two wins of the season against CSU 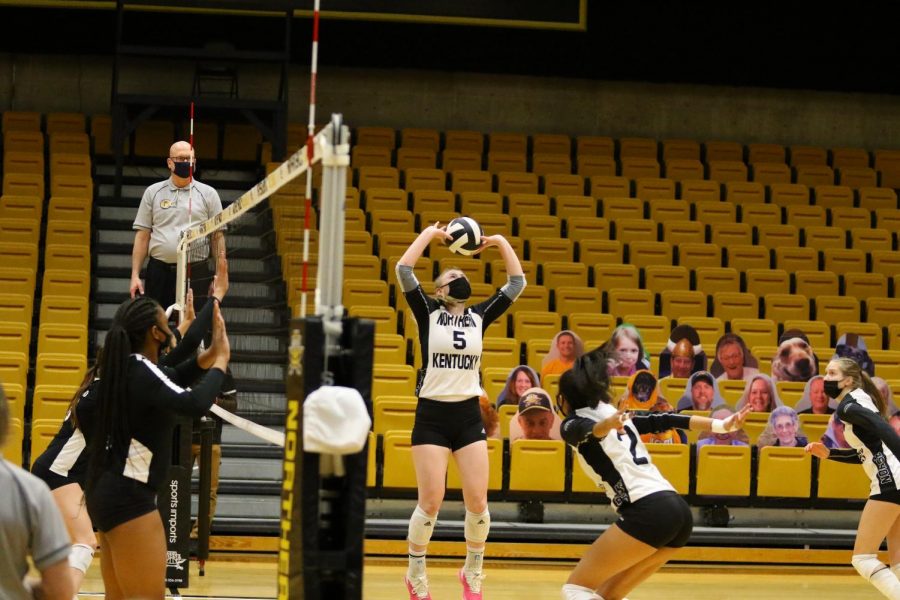 In the first set of the match, Cleveland State came out quickly putting a 7-4 lead on the Norse, but ultimately the Norse rallied back to win the set. At the end of the first set, Reilly Briggs and Kalein Gentile put up a total of 10 kills combined.

In the second set of the night, the Vikings came out even faster putting on a 7-3 lead and then 9-4. However, that wasn’t enough to contain the Norse. NKU ended the set 26-24 with Gentile adding on four more kills.

During the third set, the momentum of the game was on NKU’s side as Briggs got a kill on the first point, which quickly led the score to 11-3 advantage. The Norse never let up after that and ended the set 25-16.

The first point of the first set began with an ace from Miranda Wucherer, but Cleveland State took the lead after reeling off three straight points followed up by another five points that put the Vikings ahead 8-2. The Vikings won the set 25-15.

Cleveland State started off strong in the second set as well leading NKU 10-6, but NKU shortly tied the set at 12-12. From that point on neither team led by more than a two point lead, but Cleveland State closed the match 25-23.

Third set of the match was all about kills and NKU brought it. Gentile led with five kills, while Anna Brinkmann, Wucherer and Abby Kanakry had four kills each. The Norse rallied back after a two-set deficit to win the third set of the night.

NKU stayed ahead in the fourth set and rallied early to earn a 8-2 lead and eventually pushed it to a 15-7 lead. Four aces from the Norse pulled the Vikings on their heels and led the Norse to a 25-16 win.

In the fifth and last set of the night, NKU put the first two points on the board, but CSU rallied back to make it a one point game at 7-6. After consecutive errors by the Vikings, the Norse capitalized on it and pulled ahead 13-10. Brinkmann then set the Norse up for match point with a kill that led to the Vikings calling a timeout followed by a two point rally. Peytton Bagwell and Wucherer shut that down quickly by ending the set and the match with a game winning block.

Up next for the NKU women’s volleyball team, they will be on the road Feb. 15-16 to face off against Green Bay.