NKU MBB survives a nail-biter against UIC on Saturday night

Langdon the hero as Norse escape with 69-67 win 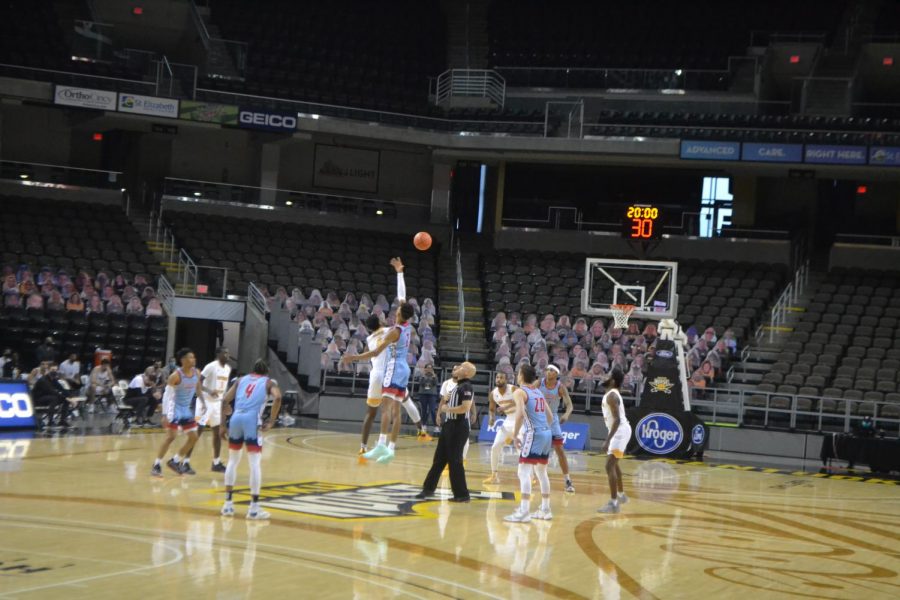 Gallery|10 Photos
Matthew Dietz
NKU and UIC tip it off for the second game of the two-game series at BB&T Arena.

Bryson Langdon took the inbounds pass, drove down the right side of the lane and made the go-ahead bucket with 1.8 seconds left to propel the Norse past the Flames at BB&T Arena. The late-game drama capped off a back-and-forth game that saw the Norse lead by as many as 13, and the Flames lead by two with 2:15 left.

Trevon Faulkner led the Norse in scoring with 15 points, but it was truly a team effort, with nine players scoring for NKU. For UIC, Braelen Bridges had a game-high 17 points on 6-7 shooting and Maurice Commander added 14 points.

Unlike Friday night’s contest, Saturday’s game started quickly, with both teams pushing the pace on offense. The Norse and the Flames both shot 54% from the field, and 33% and 37% from three-point range, respectively. Leading 19-18 midway through the period, NKU rattled off seven straight points from David Böhm and Faulkner to take an eight point lead. The Norse led by as many as 11 points before UIC chipped away at the deficit by making field goals, forcing NKU turnovers, and getting to the free throw line.

After  NKU took a 39-35 lead into halftime, the second half slowed down a bit. The two teams traded buckets for the first two minutes of the second half before NKU went on a 10-2 run to take a 55-42 lead, punctuated by a Faulkner mid-range jumper.

UIC responded the same way they did in the first half, eventually taking a 67-65 lead on back-to-back three pointers by Jamie Ahale with 2:15 left. From there, Langdon took over, scoring two baskets in the final minute to put the Norse ahead.

After Langdon missed a free throw, UIC called timeout to set up a play. But, on the ensuing inbound, the ball hit the scoreboard, giving possession back to NKU. All the Norse had to do was inbound the ball and run out the clock.

Despite trailing late, Head Coach Darrin Horn is proud of his team’s effort and resiliency.

“Our guys never flinched, got two huge stops, and then made a couple big offensive plays,” Horn said.

The original play design didn’t call for the junior to have the ball in his hands, but he had to improvise with time winding down.

“I was looking for Marques [Warrick] for the back door, and it was only like five seconds left so I knew I just had to get a bucket,” Langdon said.

For Langdon, it was an uplifting moment after a tough week in practice.

“[Bryson] showed the character that we know that he has, and came out and really played to win,” Head Coach Darrin Horn said.

NKU has now won four straight games and that fact is not lost on Langdon.

“It just feels good to win again and get back on our feet and gain some confidence,” Langdon said.

One night, after handing the Milwaukee Panthers their first Horizon League loss, the Norse beat the Panthers again to the tune of 68-61. For a second straight night, Carissa Garcia led the Norse with 22 points, while Lindsey Duvall added 13 points and Ivy Turner had 11 points. The Norse are now 6-5 overall with all six wins coming in Horizon League play. Next up is a weekend series against Green Bay on Feb. 5 and 6 at BB&T Arena.