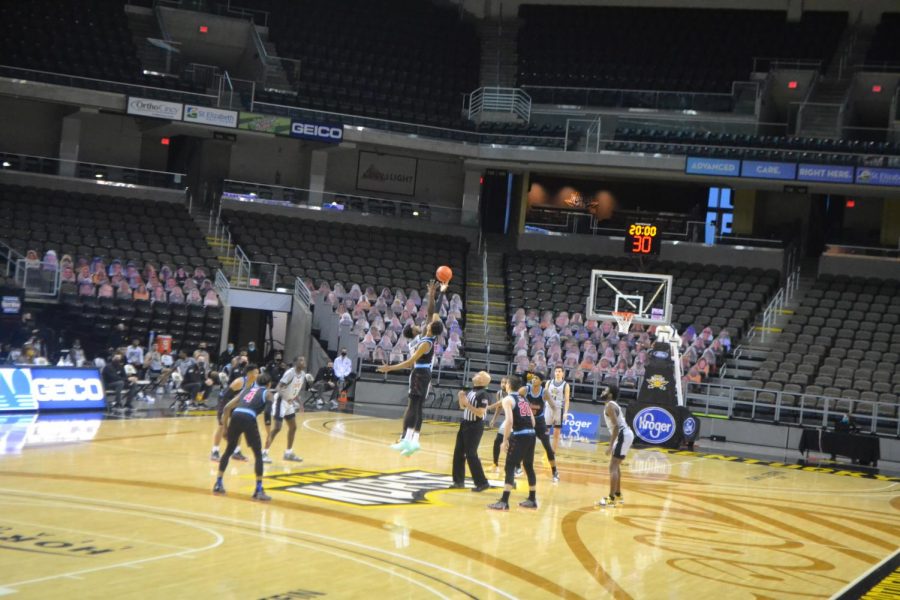 Gallery|10 Photos
Matthew Dietz
The Norse and UIC Flames tip it off from BB&T Arena. NKU would go on to win 72-68.

Trevon Faulkner’s game-high 25 points and 12 rebounds powered the Norse past the UIC Flames 72-68 Friday night at BB&T Arena. With the win, NKU improved to 8-8 overall (6-5 in the Horizon League). Zion Griffin had a team-high 15 points for the Flames, who dropped to 8-6 overall (5-4 in the Horizon League). NKU has now won three games in a row including last weekend’s sweep of Robert Morris.

Marques Warrick poured in 20 points on 7 of 14 shooting, with 16 of those points coming in the second half. The five-time Horizon League Freshman of the Week also played a crucial role on offense when Faulkner exited with an injury midway through the second half.

“[Marques] is a great dude. He comes to work every day in practice, and he just keeps his head up,” Faulkner said.

NKU had a strong defensive showing early in the game, keeping UIC off the scoreboard for the first 4:25 of the first half, while forcing three turnovers before the first media timeout.

“I thought our defensive energy, and our energy on the offensive end was really good to start the game, and I think that really helped set a tone for how we wanted to play,” Head Coach Darrin Horn said.

In the first half, neither team had more than a five-point lead until NKU opened up a 26-18 point lead at the 3:28 mark. The Norse entered halftime with a 32-23 lead thanks to Faulkner, who grabbed a defensive rebound with three seconds left, took two dribbles, and heaved a three-quarter court shot that went through the net as time expired. Faulkner’s buzzer-beater gave him a double-double in the first half with 12 points and 10 rebounds.

“It was high energy, and that’s what we needed going into the second half,” Faulkner said.

After scoring the final five points of the first half, the Norse came out of halftime by scoring six straight points and taking a 38-23 lead. UIC closed the gap to four points at 40-36, but seven straight from the duo of Bryson Langdon and Warrick stretched the lead back to 11.

The Norse maintained a comfortable lead until back-to-back three-pointers by Jamie Ahale and a Zion Griffin layup cut the UIC deficit to three at 61-58. NKU was able to close out the game by shooting 7-8 from the free throw line in the final minute and a half, including two by Faulkner with three seconds left.

“That’s always our goal, is to get more free throws than the other team and try to be as efficient as we can,” Faulkner said.

“Their whole philosophy is they don’t want to give up three-point attempts. I thought we did a good job of being on balance, and drawing fouls and getting to the line,” Horn said.

The Norse and Flames face off again tomorrow night at BB&T Arena at 5 p.m. The action can be seen on ESPN+.

Friday’s game represented the first game for the NKU WBB team since the team went on a COVID-19 related pause back on Jan. 7. The Norse return to action against the Panthers tomorrow at 5 p.m.