Norse lost in semifinal of Horizon League Tournament in 2019 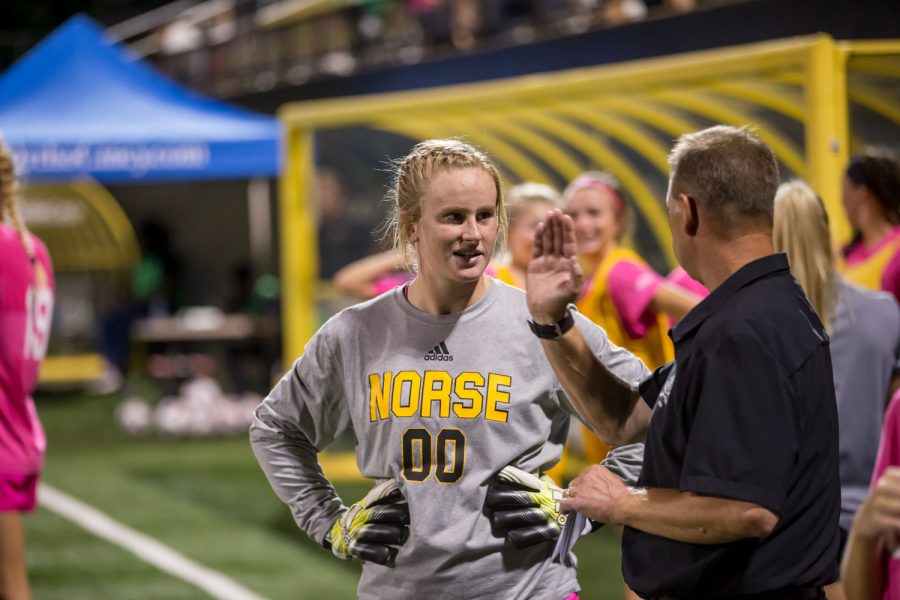 FILE: Women’s Soccer Head Coach Bob Sheehan talks to Mimi Stines (00) before the start of the second half during the game against Wright State. The Norse fell to the Raiders 3-1 on the night.

In the fall of 2020, with the COVID-19 pandemic continuing to spread throughout the country, the Horizon League made the decision to postpone all fall sports, including soccer. Now, all fall sports that were canceled have been moved to the spring of 2021, allowing student-athletes at NKU and across the Horizon League to have a season, albeit with many restrictions and safety challenges.

Just a few weeks ago, members of the Northern Kentucky women’s soccer team were not even sure if they would have the opportunity to play in 2021. The team had been continuing to train in the offseason, but the possibility that games would not happen was very real.

Now, with the conference-only 2021 schedule having been released, the Norse are looking to avenge last season’s Horizon League Tournament semifinal loss to the UIC Flames, beginning on Feb. 3, when the Norse will host UIC to kick off what will be an unprecedented season.

Due to the pandemic, the Horizon League shortened each team’s schedule this spring, crafting it so that each team will only play conference opponents, with just 10 games in total during the regular season.

“We have seen a ton of improvement already in practice in just the short time that we have been here, so we know that it’s important to, right off the bat, come out strong, play hard and to win,” junior goalkeeper Mimi Stines said.

In addition to the challenges that COVID-19 will present, the Norse will also enter the 2021 season looking to replace the production of 2019 Horizon League Player of the Year, midfielder Shawna Zaken. Zaken led the team with 13 goals in 2019, just under half of the 27 goals that the Norse scored all of last season.

In addition to the loss of Zaken, the Norse also enter 2021 without forward Ally Perkins, who was second on the team with five goals in 2019.

The Norse will now turn to senior forward Kailey Ivins, who started 17 games in 2019 for the Norse, recording two goals and a team-leading seven assists, to take on a major role at one of the forward positions.

“My position kind of sets the tone right off the bat for the team,” Ivins said. “I also have a lot of younger forwards along with me, so just being that leader for them as well, just the work ethic up top, it has to be big to fill those shoes from last year.”

Among those younger forwards that are returning this season are sophomore Lindsey Meyer (3 goals, 2 assists in 2019) and junior Kiley Keehan (4 assists). The Norse expect each of them to take on a bigger role with the loss of Zaken, Perkins and midfielder Hannah Fischer.

“She’s been absolutely fabulous,” Sheehan said about Meyer. “She will probably have a new spot this year as an attacking mid, and we will push Kailey higher up on the front line. Kiley Keehan has a year under her belt, and I think she’s going to be more productive this year.”

Sheehan said he also expects sophomore forward Annie Greene to take on an increased role in 2021, after battling through an injury-shortened freshman season.

In addition, Keehan’s younger sister Kamryn will also be joining the fold as a freshman forward, while forwards Allison King and Sofia Wilmes will look to earn minutes right away as well.

Defense a priority in offseason practices

Slowing down the opposition on the defensive end of the ball was a major strength for the Norse in 2019, as NKU ranked fourth in the Horizon League with 1.28 points allowed per game in 2019, the last year the team was able to play competitively.

“Just this past week we have been focusing a lot on defensive shape and the principles of one-versus-one defending and we have seen amazing improvement in just a week,” Patrick said.

Sheehan said that while the upperclassmen that are returning are going to play a big role, the depth that the Norse have will be a strength on the defensive side.

“We have a pretty good group of people vying for positions on the back line, so hopefully we can find a rhythm back there this year as well,” Sheehan said.

The Norse have three freshmen defenders joining the program this season in Lauren Deckert, Emily Tirey and Alexis Trammell.

The Norse feel confident that even though the offseason has been tumultuous, the freshmen that are joining the program can all make an impact on the field when called upon.

“I’m really excited to see them in these first couple games and see what they bring, because I think they all bring their own unique characteristics to our team,” Patrick said.

Sophomore defender Megan Sullivan, a member of the 2019 Horizon League All-Freshman Team, is a two-sport athlete at NKU, playing soccer in the fall and track and field in the spring. Because the season was pushed back to the spring, Sullivan will not be joining the soccer team for the 2021 spring season.

Stines had a historic season defending NKU’s goal in 2019, breaking the single-season record for saves (97) and saves per game (5.39) in just her sophomore season.

Entering her junior season though, Stines said that she is not hoping to break her own record set in 2019, because that would mean many shots at the goal taken by the other team, something the Norse are trying to cut down on in 2021.

“I was talking to Coach the other day, and we were like ‘that’s awesome that I had this saves record’, but that means I got a lot of shots, so we’re looking to not break the record this year,” Stines joked.

After starting 17 games last season, Stines will once again be the primary goalkeeper for the Norse during the spring season, though freshman goalkeeper Mickayla Kowalski may see minutes as well.

Several captains on the team said that they have been impressed by the talent that Kowalski has shown at practice.

Breaking down the schedule

In an effort to cut down on the amount of travel that will be done, as well as to ensure that as many conference games as possible can be completed, the Norse and other members of the Horizon League will play a ten-game, conference-only schedule in 2021.

The first eight of the ten matches will be played on Wednesdays, running from NKU’s Feb. 3 home matchup against UIC through a road match against Purdue Fort Wayne on Mar. 24. From there, the team will travel to IUPUI on Mar. 30, before hosting the Wright State Raiders on Monday, Apr. 5 for the regular-season finale.

“We start off with a pretty tough draw, but I think our players have been working very, very hard and hopefully we’ll be ready to play,” Sheehan said.

Of course, as we have seen with both the men’s and women’s basketball programs in 2020-21, COVID-19 can upend any schedule and postpone scheduled games, should a player, coach or other team personnel member test positive for the virus.

“We don’t know what is going to happen, all we can do is try to stay together and try to create a positive experience for our student-athletes,” Sheehan said.