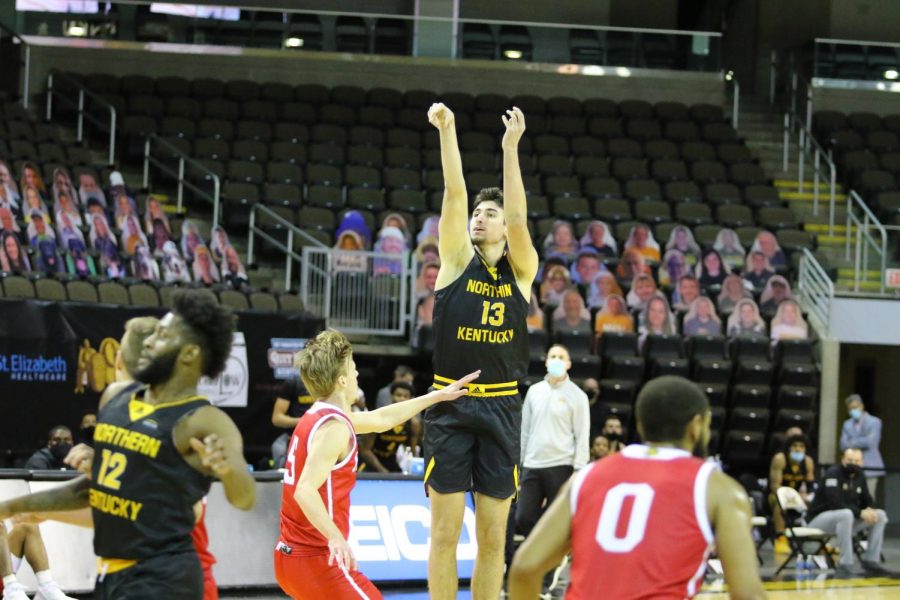 In yet another closely contested game for the Northern Kentucky Norse men’s basketball team, the IUPUI Jaguars finished off a two-game sweep of the Norse at BB&T Arena, winning on Saturday night by a score of 65-63.

Much like on Friday night, the Norse struggled to stop IUPUI senior guard Marcus Burk, who poured in a game-high 23 points. Fellow senior guard Jaylen Minnett added 18 points, as the duo combined for 41 of the Jaguars 65 points on Saturday.

“They are two good players, so it was kind of challenging for our defense to make adjustments, find them, make sure they didn’t get any open shots,” NKU junior guard Trevon Faulkner said.

NKU was paced offensively by Faulkner, who had 16 points and six rebounds, while also shooting a flawless 8-8 from the free-throw line. Junior forward Adrian Nelson grabbed a team-high 13 rebounds. Freshman guard Marques Warrick, the owner of four Horizon League Freshman of the Week honors this season, had a rare off night, scoring just nine points while shooting 3-11 from the field.

The first half brought encouraging signs for the Norse defensively, as NKU was able to hold the Jaguars to only 41.4 percent from the field and just 31.6 percent from the three-point range. Defense was a key focal point for the Norse following Friday’s contest, a game in which IUPUI used a hot shooting performance to seize a 74-69 victory.

Unlike Friday night, the Jaguars held a six-point lead going into the locker room, forcing the Norse to play from behind for much of the second half.

NKU came out of the break and was able to cut the lead to two before the first media timeout, but every time the Norse seemed like they were preparing to vault ahead, the Jaguars had an answer, most commonly in the form of a three-pointer. The Jaguars attempted an eye-popping 30 three-point attempts, cashing in on 11 of them.

On the contrary, the Norse shied away from attempting a barrage of threes on Saturday night, finishing just 4-13 from three. NKU came into the game ranked as one of the worst three-point shooting teams in the nation, and instead focused their offensive game plan on getting into the paint, where the team collected 30 of their points in the contest.

“We definitely wanted to not settle for threes, not necessarily not shoot it as much, Head Coach Darrin Horn said.

The game remained closely contested until the final second, as several of NKU’s games have been during this 2020-21 season, and the Norse had an opportunity to win the game at the final buzzer.

Following a missed free throw from IUPUI’s Bobby Harvey, Warrick received a pass from junior point guard Bryson Langdon and fired a three from the wing with the Norse trailing by two, coming just short as the shot clanked off the rim as time expired.

“We’re letting teams get too many second-chance points, which is costing us games,” Faulkner said.

According to Horn, allowing the Jaguars to get out in transition off of NKU turnovers was a difference maker in the game, and led to the two-point defeat.

“I really thought [18 turnovers] was the difference in the game, because it led to so many easy points for them in transition, and at the end of the day it was just too much to overcome,” Horn said.

Horn said that amidst this current four-game losing streak, there are several things that the Norse must improve upon as the season reaches its halfway point.

“It is all little detail stuff, that you got to get better at,” Horn said. “You can’t lose key shooters, got to be strong with the basketball, got to take care of the basketball, things that we have got to make progress in and come out and be able to do in a game.”

The Norse will go back on the road for their next Horizon League series on Jan. 22-23, travelling to Moon Township, Pennsylvania for two games against the Robert Morris Colonials, who are in their first season as a member of the Horizon League. Friday’s game will tip off at 7:00 p.m., while Saturday’s tilt will tip off at 5:00 p.m. Both games can be seen live on ESPN3.