Both teams will be in action tomorrow at BB&T Arena 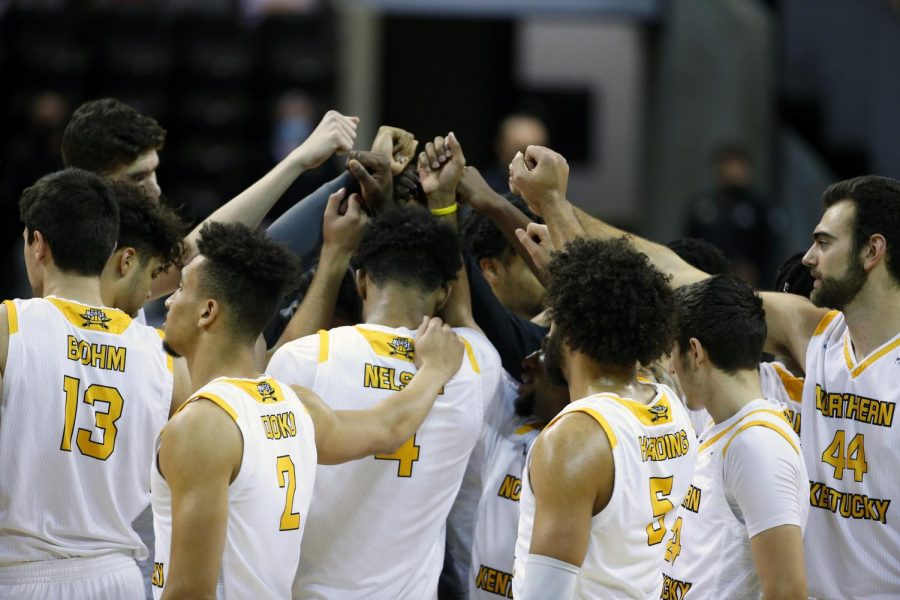 NKU breaks a huddle during their win against Purdue Fort Wayne at BB&T Arena.

In their first game back since pausing basketball activities on Dec. 22 due to COVID-19 complications, the Northern Kentucky men’s basketball team picked up a 75-68 victory over the Purdue Fort Wayne Mastodons on Friday night.

Freshman guard Marques Warrick led the team with 22 points on 8-14 shooting from the field. Junior guard Trevon Faulkner finished with 21 points, while also leading NKU with six rebounds. Both players recorded three steals in the contest.

The Norse fell behind significantly early in the first half, trailing 18-4 just five minutes into action. The Norse fought back though, spurred by three straight layups by junior guard Bryson Langdon, eventually cutting the lead to 18-13.

“I think it was pretty obvious early in the game that we had eight days off and only a few days to prepare for this one,” Head Coach Darrin Horn said. “Really sloppy with the basketball and not assertive at all on the defensive end.”

After that mini run by the Norse, PFW continued to increase their lead throughout the first half, increasing their advantage back to double-digits with just over five minutes remaining until halftime.

That’s when Faulkner drove through the lane and threw down a ferocious, one-handed dunk, trimming the lead to 30-22, and setting the stage for a 10-0 run by the Norse to even the score at 30.

“At the moment it was just a good spark, and it brought energy to the team and that’s what we needed,” Faulkner said on his dunk.

Although PFW entered the break with the upper hand at 38-32, the run at the end of the first half, as well as a changed mindset going into the second half helped revitalize the Norse.

“They just kind of mix it up here and there [defensively] and we just had to stay composed,” Faulkner said.

The Norse came out of the locker room hot in the second half, scoring 12 early points before the under-16:00 media timeout. The Norse shot much better in the second half, connecting on over 45 percent of field goals and over 36 percent on threes, compared to just 45.8 percent and 18.1 percent respectively in the first half.

The two teams continued to trade baskets throughout the second half, and with 5:35 remaining, the score was all even at 60. Two baskets by Marques Warrick, sandwiched around a John Harge three-point play, gave the Norse a 67-60 advantage, and set up one of the most impressive shots that the Norse have had this season by Warrick with under a minute to go.

With the Norse up by four and the shot clock winding down, Warrick had the ball on the perimeter and had to get a shot up. With multiple PFW defenders surrounding him, Warrick rose, double-pumped while still in the air, and buried the dagger three-pointer and his final field goal of the night, to put the Norse ahead 72-65.

“I think he just keeps getting better,” Horn said about Warrick. “He has no fear on the offensive end, and he is a very gifted scorer, as you saw tonight he scored in a bunch of different ways.”

Another key for the Norse today was the production that they received from the bench, in particular junior guard Darius Harding and redshirt freshman forward John Harge, who each played 20 minutes on Friday after not seeing the court very much through the first seven games.

“It was good to see them play in a way that we think they’re capable of,” Horn said regarding Harding and Harge. “The exciting thing is that they’re only going to continue to get better.”

Ultimately though, Horn said that the key to the Norse earning the victory tonight was their improved play on the defensive end, forcing the Mastodons into 23 turnovers.

“We challenged our guys coming into the game that this is a really well-coached, high-executing, highly skilled basketball team and if we’re not aggressive, they are literally going to pick you apart,” Horn said about Purdue Fort Wayne and the defensive aggressiveness that the Norse displayed.

NKU will be back in action tomorrow night for the second game of this two-game set against the Mastodons at BB&T Arena. The game is scheduled to tip at 6:00 p.m. and will be broadcast on ESPN3.

The Louisville women’s basketball team came into the new year as the second-ranked team in the country, but the Norse put a scare into the Cardinals and their undefeated record on Friday, before eventually falling 74-64.

The Norse did not seem to be affected by the pressure of facing off against the number-two team in the country, holding a 43-39 lead with just under three minutes remaining in the third quarter. Then the Cardinals came alive offensively, using a 14-0 run to end the third quarter to build a substantial lead that they would not relinquish.

This game represented a homecoming of sorts for Duvall, who transferred to NKU this season after spending three seasons at Louisville, including one as a redshirt in 2017-18. Duvall averaged 3.1 points per game during her time for the Cardinals.

After this weekend’s scheduled games against Cleveland State were postponed due to COVID-19 issues, the Norse have added an additional game to their schedule tomorrow afternoon, as they will host Salem University at BB&T Arena. Tip is scheduled for 12 p.m.