Norse improve to 1-0 in conference play with the win 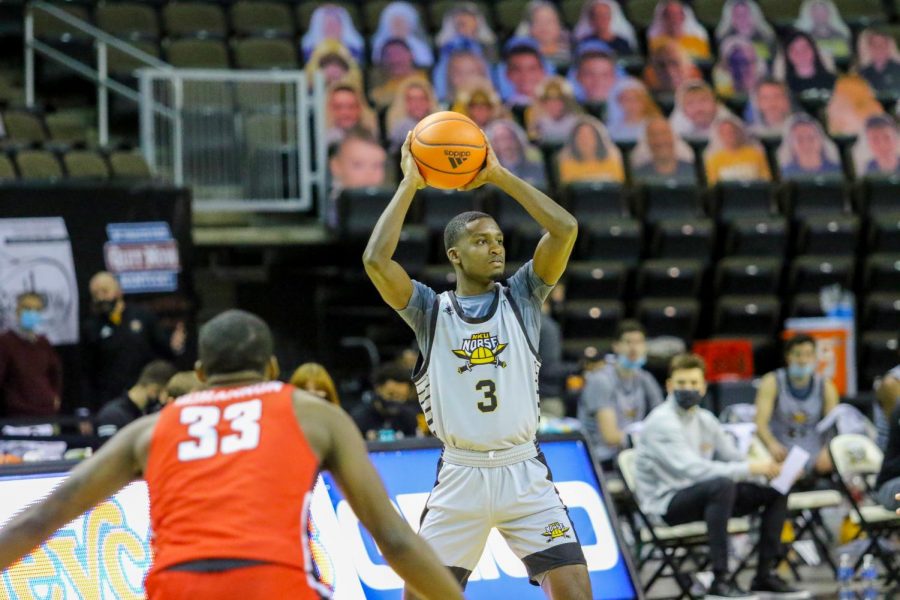 Marques Warrick (3) looks for an open teammate in NKU’s game against Youngstown State. Warrick finished with 18 points in the victory.

After allowing a season-high 92 points in their loss to Kent State last Sunday, the Northern Kentucky Norse men’s basketball team stifled the Youngstown State Penguins on the defensive end on Saturday afternoon, winning their Horizon League opener, 79-64. With the victory, the Norse improved to 3-3 on the season, and 1-0 to begin conference play.

The Norse were led by senior forward Adham Eleeda and freshman guard Marques Warrick, who each had 18 points in the contest. Eleeda collected all of his points from beyond the arc, connecting on six of his seven three-point field goal attempts. Warrick also brought down five rebounds, while dishing out three assists.

“In practice, we really preach on spacing the offense, and credit to our point guard Bryson [Langdon],” Warrick said. “He found us in our spots and we just knocked it down.”

The first half of the game gave the impression that the outcome would be decided in the final minutes, as neither team could gain a significant advantage, with the Norse clinging to a 34-31 lead at halftime. From there, though, NKU ratcheted up the intensity on the defensive end, holding the Penguins to a paltry 29.0 percent from the field in the second half. YSU did end up scoring two more points in the second half than the first half, but were boosted by 14 made free throws.

Much of the success for the Norse on the defensive side of the game came from shutting down YSU’s three-point attack. The Penguins shot just 3-18 from three in the game from three, and were 1-8 in the second half.

“[Youngstown State] is a team that we have a ton of respect for. We know how good they are, how veteran they are, and so it was less a concentrated effort to defend the three, more just an effort to be aggressive defensively,” Head Coach Darrin Horn said.

The first four minutes of the second half was instrumental for the Norse, as they came out of the locker room and immediately went on an 11-3 run.

“We were up by three, but we needed to extend that and get a cushion, and that’s what we did,” Warrick said.

Through the first five games of the season, the Norse had not received the production that they were expecting from the lone senior on the roster, Eleeda.

That changed on Saturday afternoon.

Eleeda showed a confidence and willingness to shoot the ball from beyond the three-point arc that he has not displayed before this season, scoring 18 points after combining for just six points in his previous two games against Dayton and Kent State.

“Adham’s got a real knack for finding the open area, and he really utilized that in the first half,” Horn said.

With the 2020-21 Horizon League schedule change that has opponents play one another on back-to-back days at the same location, the Norse will have a quick turnaround for their next game on Sunday afternoon against Youngstown State. The game will tip off at 3:00 p.m. from BB&T Arena and will be broadcast nationally on ESPN2.

“I’m really proud of the way we played today, not just winning, but the way our guys played,” Horn said. “Now the challenge is, especially with a young team, can you come back and do it at that same level tomorrow and give yourself a chance to win?”