Norse improve to 1-4 on the season following the victory 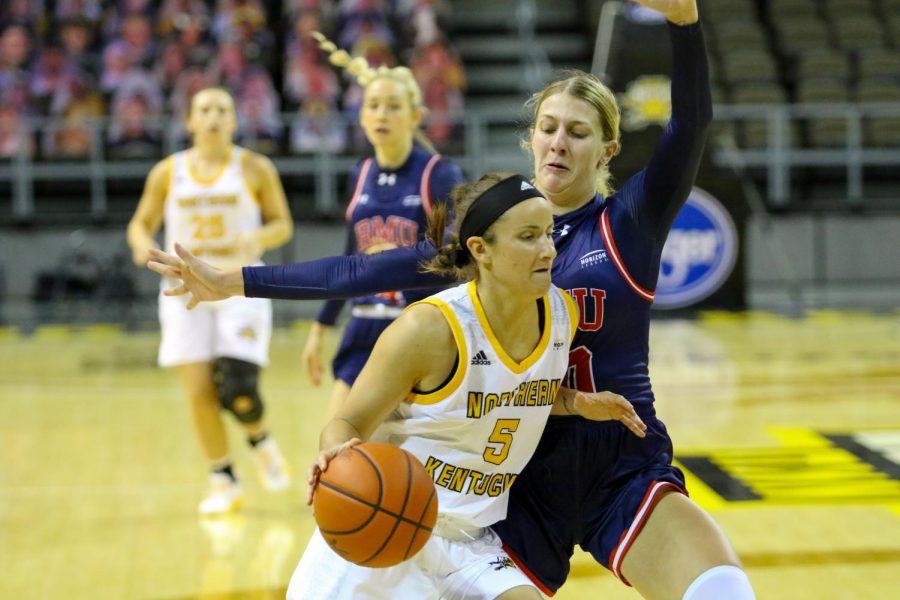 Guard Lindsey Duvall (5) drives to the hoop against a Robert Morris defender. Duvall finished the game with 21 points and 13 rebounds.

The Norse were led offensively by redshirt junior guard Lindsey Duvall, who led the team in points with 21, rebounds with 13 and assists with four. Sophomore guard Ivy Turner contributed 12 points and three assists. Senior forward Grayson Rose finished second on the Norse with seven rebounds.

“We had a great week of practice, and I think that really led to this great team win,” Duvall said.

After a closely contested first quarter, the Norse used a dominant second quarter to take a 28-18 lead into halftime. NKU closed out the half on a 9-0 run. The Norse held the Colonials to 3-10 from the field in the quarter, outscoring RMU 16-7 in the process.

NKU was led on Saturday afternoon by their defense, which stifled the Colonials into an abysmal shooting game, as RMU shot just 23.1 percent from the field in the game, and 15.0 percent from three-point range. On the contrary, the Norse knocked down 40 percent of their three-point attempts, a key factor in the outcome.

That defensive intensity that the Norse displayed carried over into the second half, as NKU held Robert Morris to just 15 points throughout the third and fourth quarters.

“We’ve come in everyday this week in practice, and [defense] has been an emphasis,” Head Coach Camryn Whitaker said. “We just continue to watch film, continue to focus on our process of improving each game, and as long as we do that, our defense will continue to improve.”

Rebounding, a major strength of this NKU team through the first five games, once again played a critical role in NKU’s success today, as the Norse outrebounded RMU 53-36 on Saturday afternoon. Duvall’s team-leading 13 boards represented her third consecutive game with double-digit rebounds and third consecutive double-double as well.

“We continue to make it an emphasis,” Whitaker said about the rebounding effort of the Norse. “We want to be the best rebounding team in our league and one of the best in the country if we can be.”

Both Coach Whitaker and Duvall were very impressed by the enthusiasm and the intensity that the bench delivered, particularly with no fans inside BB&T Arena.

“With us not having fans here to help us with the home-court advantage, I think that the chatter and that excitement and enthusiasm for each other really helped us,” Whitaker said.

“When you hear everybody cheering for you, or reminding you of a play, that just gives you a lot of comfort,” Duvall added.

With the victory, the Norse have notched their first win of the season to improve to 1-4, while also opening 1-0 in Horizon League play. In a new wrinkle to the 2020-21 season, NKU will meet Robert Morris once again tomorrow afternoon at 2:00 p.m., as the Horizon League tries to limit travel by having two teams play on consecutive days at the same location throughout conference play.

Sunday’s game can be seen live from BB&T Arena on ESPN+.