Juniors lead the way as NKU MBB defeats Tennessee Tech to improve to 2-0 on the season; WBB falls to 0-3

NKU basketball teams trending in opposite directions early in the season 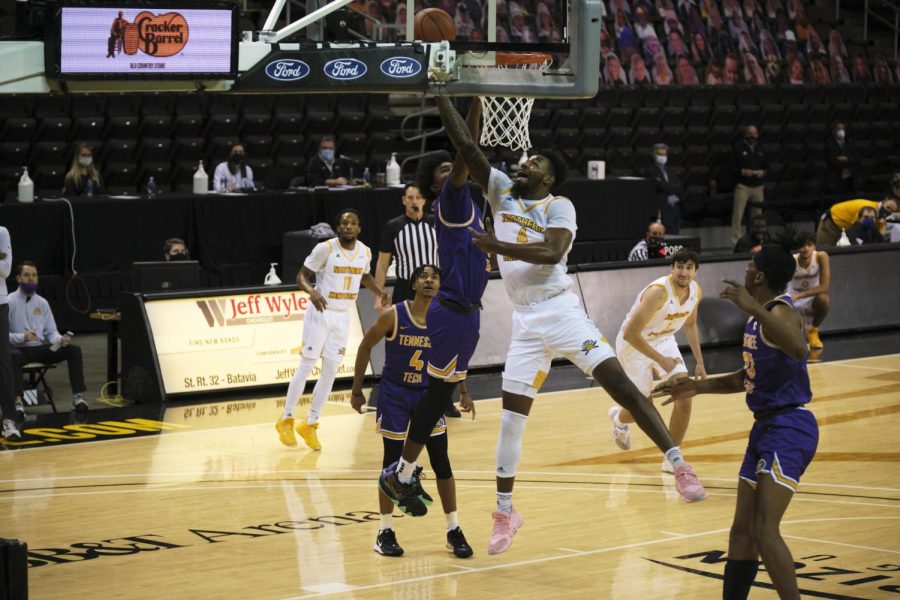 Gallery|10 Photos
Billy Keeney
Adrian Nelson (4) lays up a shot against Tennessee Tech. Nelson would finish with 10 points on the night.

“I was just trying to pick it up defensively because that was our goal,” Faulkner said. “I just try to do everything I can, just the little stuff, and that’s what wins games.”

NKU struggled to shoot the ball from the field in the first half, particularly on threes, as the Norse shot just 4-14 from three-point in the first 20 minutes, and 6-27 for the game. As a result of these shooting miscues, the team trailed for much of the first half before fighting back to cling to a three-point advantage at halftime.

A positive note for the Norse in respect to their shooting came at the free-throw line. NKU struggled in its first game against Ball State at the charity stripe, but capitalized on their opportunities tonight, shooting 18-27.

“We want to get to the foul line and be aggressive driving the ball, Head Coach Darrin Horn said. “We want to shoot threes, and we have good shooters that are going to start making them at a high clip, but we think getting to the foul line is really important for a lot of reasons.”

The Norse came out with much more energy in the second half, especially on the defensive end, where the team held Tennessee Tech to just 29 points in the second half, and neutralized the Golden Eagles’ three-point attack. Forcing turnovers became a key advantage for the Norse, as the team forced 20 turnovers, including six from TTU’s lead guard Keishawn Davidson.

Coach Horn took the blame for his team not playing aggressively enough defensively in the first half, but said the team performed much better after halftime.

“That’s two games in a row where the second half [the defense] has been really good and we have been much more aggressive,” Horn said. “I’ve got to do a better job of getting our guys ready to come out and play with that aggressiveness early on.”

Late in the second half, with the defense continuing to stifle TTU, the Norse began to pull away, increasing their lead to double-digits on a pair of free throws from Faulkner with six minutes remaining, and later to 15 points on a jump shot from Langdon.

The Golden Eagles refused to go away, however, as TTU was able to force the Norse into multiple late turnovers to cut the lead back into single-digits, but it was not enough. NKU capitalized on late free throw opportunities, and secured the nine-point victory.

On Thursday, Warrick struggled shooting the ball consistently throughout the night, collecting just seven points on 2-6 shooting from the field. Robinson, however, along with freshman forward David Böhm were both key contributors off the bench. Robinson tied for second on the team Thursday with 14 points while also grabbing four rebounds. Böhm added 12 points and four boards.

“They’re hard workers, they don’t give up,” Faulkner said about the Norse freshmen. “They come to practice everyday, compete, they don’t get down on themselves, and they just come to work, and it shows on the court.”

Coach Horn was once again impressed by the freshmen, particularly Böhm, who played significantly more minutes tonight than he did against Ball State.

“I really thought he got himself going, being active defensively and rebounding the basketball tonight,” Horn said.

Horn shared a similar refrain for Robinson, who has had two very productive games to begin his college career at NKU.

The Northern Kentucky Norse women’s basketball team fell to 0-3 in the season with a home loss to the Falcons of Bowling Green State by a score of 63-49.

The Norse were led offensively by two players who scored 10 points each in guard Carissa Garcia and guard Lindsey Duvall, who also grabbed 14 rebounds in the contest to give her the first double-double of her college career. Forward Kailey Coffey contributed eight rebounds in the losing effort.

“It’s nice, but obviously you would rather have it with a win,” Duvall said on her double-double. “My mentality is usually just to go out there and do whatever the team needs, whether that’s rebound or honestly just to work hard.”

A tough second quarter for the Norse was a deciding factor in the outcome, as Bowling Green dominated the quarter by a 21-11 margin. The lopsided quarter gave the Falcons a 34-20 halftime lead that they would not relinquish. One of the problems for the Norse during the contest was a barrage of turnovers, as NKU finished with 23 on the afternoon.

The Norse did, however, hold the edge in rebounding over Bowling Green, grabbing 40 boards compared to the Falcons’ 26.

“To me, rebounding is about effort, and our girls give great effort day in and day out, and I think right now through those first three games, it is probably one of the things I am most proud of,” Head Coach Camryn Whitaker said.

Whitaker was frustrated with the turnover situation, but stressed that the team has not had many practices, and will be looking to continuously improve with more repetition.

Up Next for the Norse

After initially being scheduled to play the Chattanooga Mocs in Tennessee last Saturday, the NKU men’s basketball program was put on pause due to COVID-19 complications, canceling that contest. However, the two teams have agreed to reschedule the meeting for this Saturday at 2 p.m. The game can be seen live on ESPN+.

On the WBB side, the Norse will be searching for their first victory of the season on Sunday, as they head to Columbus, Ohio to battle the Ohio State Buckeyes. The time of that game is currently TBD, as well as the television station.