2020-21 WBB Preview: With plenty of returning experience, Norse have eyes on the prize 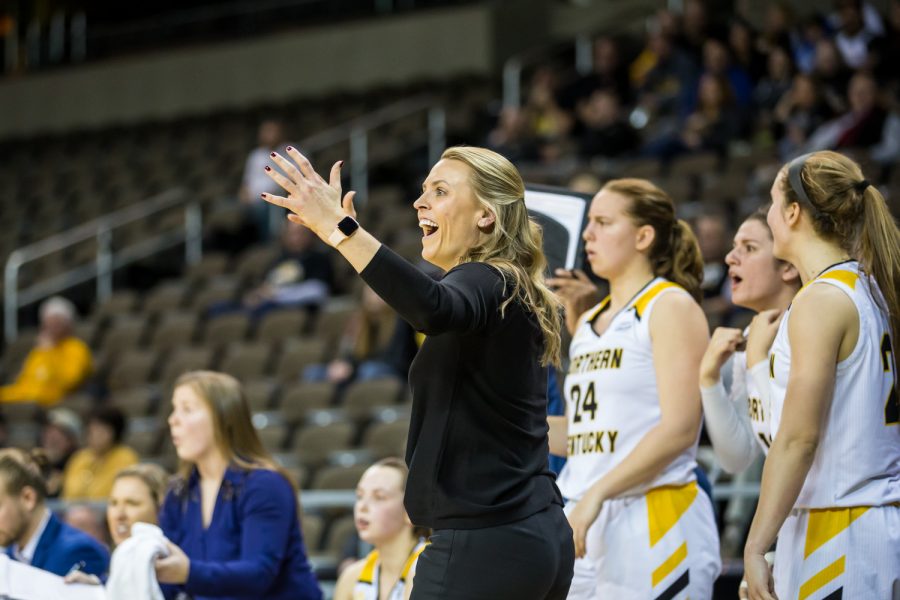 Women’s Basketball Head Coach Camryn Whitaker reacts after a Norse point during the quarter final game of the Horizon League Tournament against Milwaukee.

The NKU Norse women’s basketball team is coming off a 20-win season in 2019-20, with 12 of those wins coming within Horizon League play.

That success may have come as a surprise to people around the Horizon League, as the 2018-19 Norse struggled mightily at times, finishing the season 11-18.

“We finally were a little more experienced with our sophomore and junior class,” Head Coach Camryn Whitaker said. “That junior class was the first class that [my staff] recruited here, so it just takes time when you’re trying to build something a certain way and build a certain culture of how you play.”

Although the 2020-21 season will look dramatically different than previous seasons due to the presence of COVID-19 and the impact it will have on the cancellation of games and pausing of basketball activities at a moment’s notice, the Norse believe they have enough returning experience to repeat last season’s success.

The Norse return ten players from last season’s team, including four of their top five scorers, their top three rebounders and of course, point guard and team leader Ally Niece, who was named to the Preseason All-Horizon League First Team by Horizon League athletic personnel and various media members.

In addition to taking on a more prominent scoring role, Niece said she is hoping to tally more assist numbers in the new season.

“I want to bump up that assist number, maybe get some more games with double-digits this year,” Niece said.

The Norse do lose one of their most prolific scorers in guard Molly Glick, but due to their depth and versatility, are ready to handle the challenge of replacing her production.

Any conversation about the guards on NKU’s roster has to begin with Niece, who averaged 13.1 points last season, while easily leading the team with 107 assists.

“She’s just the extension of the coach on the floor,” Whitaker said about Niece.

Joining Niece on the perimeter will be a pair of sophomores who had excellent freshman seasons in Ivy Turner (8.8 PPG) and Carissa Garcia (7.3 PPG).

“I think she should have been Freshman of the Year [in the Horizon League],” Whitaker said regarding Turner. “I thought she was the best freshman in our conference and she continues to improve.”

Both Niece and Whitaker had glowing praise for the work and preparation that freshman Ellie Taylor has done so far in practices.

“She is a long, athletic guard, who is one of the best passers I think I have ever coached,” Whitaker said. “She sees the floor well and she has really practiced really well.”

With Taylor in the fold, Niece may have another player to delegate point guard duties to, though the junior prefers to play with the ball in her hands.

“I have always been comfortable with the ball in my hands, and I would rather set my teammates up for a shot versus shoot it myself,” Niece said.

Guard Lindsey Duvall is a transfer from Louisville, who will also make an impact early on, particularly with her previous Division I experience.

“She’s a great kid, and one of the toughest players and most competitive players that I have ever coached,” Whitaker said about Duvall.

Freshman Kennedy Igo will also fight for minutes in the backcourt.

With the amount of returning production and experience, the frontcourt has a chance to be the major strength of the team in 2020-21.

Also returning in the frontcourt are two senior forwards in Janna Lewis and Jazmyne Geist, two players who are looking to carve out larger roles in the rotation.

As far as freshmen forwards, the Norse bring in 6’2 Emma Palmer from Tennessee and 6’4 Christyan Reid from Virginia.

“Emma is a very skilled big post, big body, and Christyan the same thing. She is so tall,” Niece said.

How COVID-19 affected the Norse

Due to the pandemic, the Norse were forced to hold summer workouts exclusively online from their own homes, and according to Whitaker, the team was unable to hold official workouts until the preseason began in August.

Whitaker said that continuing to do the fundamental aspects of the game well will be important for this team to reach their full potential. Part of that is continuing to work on strength and conditioning, even when COVID-19 protocols forced the team to hold workouts virtually.

“Our players were on their own, holding each other accountable,” Whitaker said. “They would be on FaceTime together, and our strength coach would send them workouts.”

Whitaker credits the experienced players that have been through workouts in the program before for unifying the team during uncertain times.

“I’m proud of our upperclassmen, all ten of them,” Whitaker said. “They did really hold each other accountable and tried to help those freshmen through that period that they would typically be here with us.”

Similar to the men’s team, the NKU women’s team will play their Horizon League conference opponents on back-to-back weekend days at the same location, aimed at minimizing travel to different locations through January and February.

Whitaker thinks that the depth of the Norse will play an important factor during these contests on consecutive days, and may even factor in strategically.

“The games are going to be 24 hours or less of a turnaround, so physically the recovery is going to be really important in that time period,” Whitaker said.

The Norse will begin conference action with the new format on Dec. 12 against Youngstown State at BB&T Arena, with the second game against the Penguins scheduled for the next afternoon.

As for non-conference play, NKU will open the season on Wednesday, Nov. 25 across the river against the Cincinnati Bearcats. Tip-off is set for 6 p.m. and will be broadcast on ESPN+.