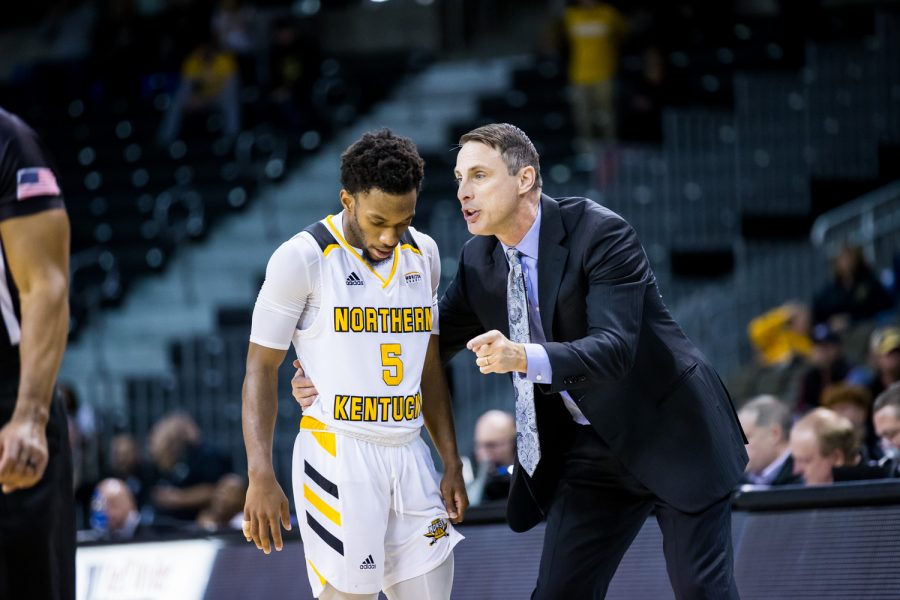 Men’s Basketball Head Coach Darrin Horn talks to Bryson Langdon (5) during a free throw during the game against Texas Southern.

The 2020-21 college basketball season promises to be unlike anything fans have ever seen before. All across the country, programs are being put on pause due to positive COVID-19 tests from someone within the team. As a result, scheduling has become hectic, and some teams still do not know which opponents they will play or when they will play them.

But amid the chaos, there will be basketball played, and the NKU men’s team will enter the season aiming for their fourth Horizon League Tournament championship in the last five seasons.

One of those championships came back in March, when the Norse concluded a 23-9 season by beating the UIC Flames to advance to the NCAA Tournament, which was cancelled just days later due to the pandemic.

The Norse lose a lot of production from last season’s team, including their top three scorers in forward Dantez Walton (16.1 points per game), guard Tyler Sharpe (15.1 PPG) and guard Jalen Tate (13.9 PPG). Junior guard Trevon Faulkner is expected to step into the lead scoring role, coming off a sophomore campaign in which he averaged 11.9 points, while starting all 32 games.

“That experience and presence, especially in those crucial situations is something that will definitely be missed,” Head Coach Darrin Horn said. “Trevon has taken a big step in that area for us and set a real tone in what we want to do and how we want to play.”

Faulkner, despite a strong sophomore season last year, was not named to the Preseason Horizon League First or Second All-League team in its Preseason poll. Faulkner though says he is not concerned with the individual recognition that he gets from the league and other media members.

“I don’t really pay attention to the accolades,” Faulkner said. “I’m just really worried about winning and our team as we get better.”

In addition to Faulkner, the Norse return several key contributors from last season’s Horizon League championship team, most of whom enter the season classified as juniors.

At the forefront is point guard Bryson Langdon (7.6 PPG) and forward Adrian Nelson (4.6 PPG), two players who started periodically throughout the season and will now step into larger roles. The 5’9 Langdon will be the primary ball handler for the Norse, while also picking up steals on the defensive side. Nelson meanwhile is a tenacious rebounder, ranking second on the team in rebounds per game in 2019-20, despite earning just 17.6 minutes per game.

As a result of these players returning, Horn is confident that the Norse will be able to retain their style of play and keep players comfortable entering his second season as head coach.

“I think because we have some returners, and had success last year playing the way we played, there is a little bit more understanding and confidence than at the same point last year, just because it was new to all of us,” Horn said.

Junior guard Paul Djoko was a valuable piece off the bench last season and will likely retain a similar role in 2020-21. Djoko is coming off a tremendous performance off the bench in the Horizon League championship game against UIC, scoring nine points, while adding three rebounds.

Two more players enter the program as juniors after previously playing at other schools. Guard Darius Harding joins the Norse from Motlow State Community College, and will provide scoring from all levels, including from behind the three-point line. Guard Carlos Hines is a redshirt junior and will provide the Norse a dynamic playmaker in the backcourt after transferring from Northern Arizona. Both players could conceivably work their way into the starting lineup as the season progresses.

The Norse add six freshmen to the mix, several of whom could play significant minutes from the beginning of the season.

Guard Marques Warrick averaged 23.2 PPG for Henry Clay High School in Lexington, Kentucky and will provide immediate scoring help on the perimeter. Fellow freshman guard Trey Robinson is 6’6 and has the length and athleticism to be a defensive menace on the perimeter.

With the difficult circumstances that teams have been placed in due to the pandemic, the team has been impressed with the composure that the newcomers have shown in practice.

“Our freshmen and our new guys, they step it up and they compete everyday in practice,” Faulkner said. “I’m impressed with all of us and I can’t wait for the season to start.”

Two freshmen big men will add depth to the frontcourt in 6’9 David Böhm from the Czech Republic, and 7’1 Noah Hupmann from nearby Covington Catholic High School. Both players may take time to get acclimated to the college game, but could see minutes in the frontcourt, particularly if injuries happen to arise.

Perhaps the freshman that could have the most impact on this season’s team is a player who spent last year in the program in forward John Harge. Harge redshirted last season and is expected to play a major role in the rotation due to his ability to stretch the floor, while also joining Nelson as a major factor on the rebounding front.

The 2020-21 schedule is going to look much different than it has in previous seasons, as concerns about the spread of COVID-19 forced the Horizon League to be flexible with its conference scheduling.

Rather than have all the Horizon League teams play one another twice at different times across January and February, the league has decided to have teams play on back-to-back days (mainly Friday and Saturday) at the same location, minimizing travel, while also maximizing the potential for teams to play the requisite 13 games needed to qualify for postseason competition.

“At some point, regardless of how they do the schedule, whether it is regular or not, it is what it is, and you gotta figure out how to prepare your team to do it,” Horn said.

Conference games will begin on Dec. 19 for all Horizon League teams, with NKU set to host Youngstown State at BB&T Arena.

In addition to scheduling, COVID-19 may also impact the amount of games that are played, as there is no guarantee that games missed will be rescheduled.

The Norse are set to begin the season on Wednesday, Nov. 25 against Ball State.