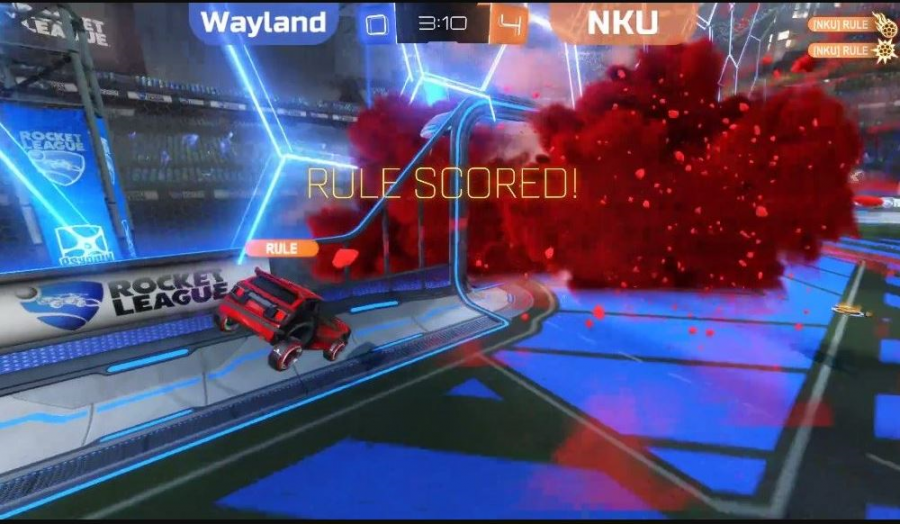 A screengrab from the game Rocket League.

With the cancelation of fall sports at NKU due to the COVID-19 pandemic, activity regarding sports on campus has been relatively quiet throughout the 2020 fall semester. There is, however, one sports organization that thrived this fall, and it is hardly considered a traditional fall sport.

The NKU esports team enjoyed an undefeated regular season before losing on Tuesday night to the Jayhawk esports Team of the University of Kansas in the National Association of Collegiate Esports Rocket League Fall Cup semi-finals.

The NKU esports team plays other schools throughout the nation in a video game known as Rocket League, a “high-powered hybrid of arcade-style soccer and vehicular mayhem,” according to the official Rocket League website. Like soccer, the goal remains to score more goals than the other team to claim victory.

Additionally, every member of the NKU Varsity Esports team goes by character names when playing Rocket League, rather than their real name. Some names on the team include ‘Pig’, ‘Rule’ and ‘Rickles.’

Hunter Kolb, junior majoring in Computer Information Technology, serves as the captain of the NKU Varsity Esports team, which brought with it many responsibilities that were vital to the team’s success.

“Essentially, I am in charge of making sure everyone is online for practices, tournaments, matches and everything of that nature,” Kolb said. “I am also the one to get in contact with other teams about scrimmages.”

Kolb’s journey to becoming captain of the esports team was one that involved several unexpected twists, even before his time at NKU. During his senior year of high school, Kolb searched around for a Rocket League Esports team at NKU before eventually speaking to the esports club president at NKU and joining the general club.

“I ended up meeting some people that played Rocket League on the [NKU] server already, and eventually we formed a team to play in a couple of different tournaments,” Kolb said.

Kolb assumed the role of captain on that team, and transitioned back into the role upon the creation of the NKU Varsity Esports team this fall.

Although the absence of more traditional fall sports at NKU, such as soccer, volleyball and cross country may be playing a factor, Kolb believes that the Esports team would still be receiving a heavy amount of attention around campus even with those sports playing.

“I don’t know if I would necessarily put it as a result of COVID, but more so as the varsity program is finally taking fruition,” Kolb said when discussing the increased publicity toward the Esports team, particularly from the university’s social media accounts.

What can be attributed to the impact of COVID-19, however, is the increased participation on the NKU esports Discord page, a social networking platform that allows gamers to interact with one another on the same server, as well as play against one another in the same games and contests.

Eric Jackman, freshman Computer Science major, joined the Esports club on campus, and is now a member of the varsity esports team.

“Everything came together just as I was starting out in my first semester,” Jackman said. “I joined the Rocket League section of the Discord server, and I saw a post for tryouts, and signed up for that.”

Jackman explained that although the idea of Rocket League is based on a more fanatical premise of “rocket-powered cars,” there is much more depth and skill that goes into the game than observers may realize.

“For instance, there are little boosts on the field that you have to pick up to be able to go fast or to be able to fly, and so in order to keep a constant pressure on the other team, you have to rotate in and out,” Jackman said. “One player could be grabbing boosts, while another player is pushing forward [with the ball].”

Kolb reiterated that point regarding strategy, and how important it is for each member of the team to be in communication with one another.

“What people don’t realize is that when you’re playing the game, and as you are driving around the pitch, you have to take into consideration not only where all your teammates are, but also where everyone else on the other team is,” Kolb said.

With the competition happening virtually through individual gaming consoles, esports has become a tremendous way for its members to keep in touch with other students and members during the pandemic.

“It’s been really good to meet friends through this team and get to know people, which would be hard this semester,” Jackman said.

Although the NACE season has officially ended for the Varsity Esports team, following the loss to Kansas, the team still has matches to play in a league known as ‘PlayVS,’ as well as another possible tournament, and is always actively recruiting new members to join the Esports Discord service and the NKU club.

“You can reach out to either myself, or a specific game’s captain or coach in that area,” Kolb said. “Also, on Discord, you have all the Eboard members listed at the very top, so you can always feel free to reach out to one of them as well.