NKU athletes reflect on using their platform to make a difference 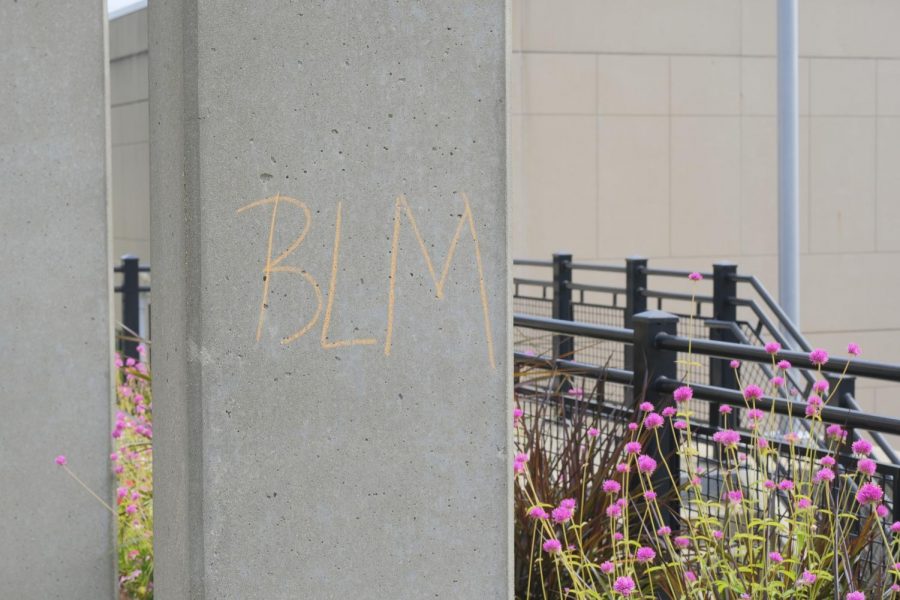 Chalk writing leftover from a protest against the Breonna Taylor court decision.

In recent months, there have been many senseless acts of violence against Black people in the United States that have sparked protests in cities across the country. These protests have led to discussions about racial injustice and what steps can be taken to enact social change.

When athletes and public figures have spoken out against racial injustice, a common response has called for them to ‘stick to sports.’ The most noteworthy example of this response was when Fox News host Laura Ingraham told LeBron James to “Shut up and dribble” after he discussed being a Black athlete in America in a February 2018 interview with ESPN.

At NKU, coaches and student athletes have taken time to reflect and converse about actions that should be taken going forward.

“I truly believe that basketball presents us with a bigger platform than just basketball. We have the opportunity to address social issues because so many people look up to us. I think that if we didn’t use our platform to address social injustices, then we aren’t doing our job to support the African American community,” John Harge, redshirt freshman on the NKU men’s basketball team, said.

The Student-Athlete Advisory Committee (SAAC) has also held meetings to address the same topics from a student athlete perspective. The Horizon League, NKU’s athletic conference, started the “We Are All One League” program to unify and provide a voice for its members and student athletes.

NKU men’s basketball head coach Darrin Horn offered his thoughts on the important perspective that each individual can bring with them to the college experience.

“I hope that anyone who works with college students would tell you that they are all bright individuals who bring a unique perspective and life experience with them when they arrive on campus,” Horn said in a statement to The Northerner. “They bring strong opinions and beliefs about the state of our world.”

“If everyone could sit with our guys, like I have the privilege of doing, and hear their stories and the genuine frustration they feel, you would be less than human not to empathize with them and support them,” Horn said. “I stand with our players and their right to voice their opinion and support their desire to take action to make a difference because Black Lives Matter.”

Horn hopes that by having these discussions with his team, the impact can go far beyond the game of basketball.

“It is our hope that our greatest impact is not our words, but our actions by modeling and living this daily for all to see,” Horn said.

Whether these actions are large or small, NKU athletes want to spur positive change.

“We just want to do anything we can to make a difference in this world. Even though we may have to start small here in our community, we still want to make a difference and have our voice heard,” Adrian Nelson and Trevon Faulkner, both juniors on the men’s basketball team, said in a statement.

“I like that we are trying to make a stand and hope it leads to more positive action. It often feels like we can only do so much as individuals, but we can make a difference by voting for our elected officials,” Janna Lewis, a senior on the women’s basketball team, said.

Every member of the men’s and women’s basketball team that is eligible to vote has registered. Additionally, on Sept. 15, the NCAA approved the #AllVoteNoPlay initiative. This mandates that no team athletic activities will be held on Election Day of each year to ensure that all student athletes have the opportunity to vote. The initiative was started by Georgia Tech assistant coach Eric Reveno.

“Whether people think their vote matters or not, it matters,” sophomore on the women’s basketball team Ivy Turner said.