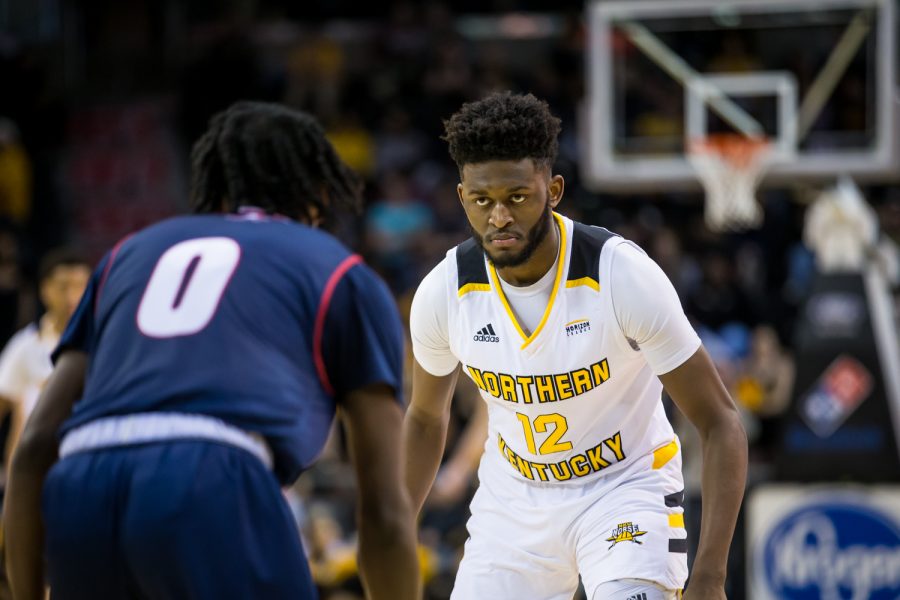 Trevon Faulkner (12) stares down Antoine Davis (0) during the Horizon League Tournament game against Detroit Mercy. Faulkner had 1 steal on the game.

The Northern Kentucky men’s basketball team will have a much different look to it than last season, and with all the upheaval, the door is open for a new leader to emerge both on and off the court, and junior Trevon Faulkner, the lone returning starter from last season, is ready to fill the role.

After winning their second consecutive Horizon League Tournament championship this past March and qualifying for their third NCAA Tournament in the past four seasons before the event was canceled due to COVID-19, the Norse lose their top three scorers from the 2019-20 team, as forward Dantez Walton and guard Tyler Sharpe graduated, while Jalen Tate, the 2020 Horizon League Defensive Player of the Year, transferred to Arkansas.

Faulkner said that while his first couple seasons were spent learning the program and trying to find the opportunity to fit into the system, he is entering the 2020-21 season with a different mindset.

“This year, now I feel like it’s time for my voice to be heard,” Faulkner said.

Faulkner is no stranger to leading teams that he has been on. Two years ago, during his senior season at Mercer County High School in Harrodsburg, Kentucky, Faulkner averaged 26.5 points and 9.3 rebounds per game, winning the 2018 Kentucky Mr. Basketball Award given to the top high school player in the state.

Faulkner places a lot of emphasis on doing his part to allow his teammates to become the best players that they can be and allow the team to reach its full potential.

“Picking up my teammates to make them better each and every day is a role that I’ve taken on for myself just to set that example for our team,” Faulkner said.

Entering the 2020-21 season, the Norse will carry a more inexperienced roster, with just one senior (Adham Eleeda), along with just a handful of juniors that have Division I experience (Faulkner, Adrian Nelson, Paul Djoko, Bryson Langdon). As a result, Faulkner said that setting an example for younger players will become a group effort as the season goes along.

“I don’t feel like it’s my team. I feel like I’m a leader on the team, but we also have other leaders on the team as well,” Faulkner said.

After a freshman season in 2018-19, during which Faulkner averaged just 4.7 points and 2.5 rebounds per game, Faulkner improved dramatically during his sophomore season, bumping his averages up to 11.9 points and 4.1 rebounds per contest.

In addition, Faulkner continued to excel on the defensive side of the ball, finishing 10th in the Horizon League in steals per game.

“Defense is important for our team, so we can get out and score and get out in transition, so that was just something that I tried to take on and get more detailed in that, so I can get more successful in that area,” Faulkner said.

While leading the team statistically while on the court is important, experience in situations, both good and bad, are also vital to becoming a leader.

Faulkner lived through an experience that many college basketball players are never able to reach—playing in the 2019 NCAA Tournament, during which NKU fell to the eventual national runner-up Texas Tech Red Raiders.

“Not too many people get that blessing to be able to play in the NCAA Tournament,” Faulkner said. “Looking back, it’s still something that gives me chills thinking about.”

Faulkner and the rest of the Norse were preparing for another trip to the NCAA Tournament this past March but were unable to participate due to the pandemic. According to Faulkner, having the Tournament canceled after NKU had just clinched a berth into the field was an emotional experience for himself, as well as his teammates.

“We put all that work in during the summer, all that time … during the season we had our ups and downs, but we fought through adversity and to achieve something like that and not be able to go to the NCAA Tournament that we earned, it just kind of sucked,” Faulkner said.

Entering this season, COVID-19 remains a factor for the NCAA and for college basketball teams trying to play again, but Faulkner is working to ensure that the team remains focused on the goals they have set for themselves.

“We’re still trying to stay in that positive mindset because we know we’re going to have a season,” Faulkner said. “We’re trying to still do whatever can to be successful this year and show people that we’re still on top.”