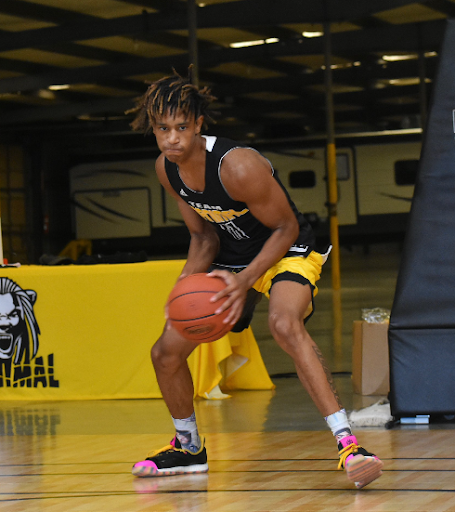 Isaiah Mason in a previous game.

COVID-19 has affected all aspects of life and the college basketball recruiting business is no exception. The recruiting process of talking to coaches, visiting and receiving information about potential college destinations is an important part of a high school player’s journey through their basketball career.

For NKU commit Isaiah Mason, the challenge of adapting to being recruited during a global pandemic has been stressful, but he is excited for the opportunity to separate himself.

The 6’5 combo-guard from Bowling Green, Kentucky is ranked by Prep Hoops as the #3 player in Kentucky in the 2021 class, but the only thing he’s focused on is getting better.

“I’m learning how to play at that faster pace level and learning the ins and outs of the game. Learning to play the game the way that it’s supposed to be played,” Mason said. “Just learning how to be smart with the ball and making the transition to a point guard at the collegiate level.”

Mason knows that the impact of COVID-19 on the recruiting process limited his exposure to a lot of schools, but he made the most of it and still knew what he was looking for.

“I was more looking into what can better me, not only as a basketball player, but as a person. So also looking at the flip side other than basketball, things like, is it more like a family here? Or is it like a one man show type deal? How coaches are to you, and if they are understanding and want to help you in the future. If they have a bond with you,” Mason said.

“I’m not really worried about the name and the hype about it,” Mason said about making his college decision. “I’m more worried about how it’s going to better my future, and how is it going to help me become more of a man than I was yesterday.”

That philosophy lines up with the ideologies used by the NKU Men’s Basketball coaching staff in recruiting.

“The things we look at are, how are they as a teammate? You know, what’s the vibe they give off when they play?” NKU Assistant Coach and recruiter Eric Haut said. “Are they our type of guy? Are they going to be able to fit in with our culture, and what Coach Horn and our staff is doing here at NKU? We know they’re going to play unselfishly and put the team above themselves.”

“We don’t offer a ton of kids. A lot of programs, the first day that you can call 2022 [recruits], they hand out 50 offers. And to us, it’s like, well how important are some of these guys to you, if you literally offered 40 guys for a position? And how well have you really evaluated them to know that they fit with what you’re doing in your program,” Haut said when describing their recruiting philosophy and strategy.

“Coach Horn wants us to do our homework and our research and make sure that these are really, you know, high quality young men that are good players that fit what he’s trying to do, and what we’re trying to do here, too” Haut said.

Mason, who verbally committed on Sep. 26 to play for Coach Horn and Coach Haut at NKU,  seems to fit exactly what the program is trying to do.

“I would say I’m more of a teammate first. I think that I put others before myself. I really just do anything you ask me to do. I wouldn’t say that I bring this or that. I bring whatever you ask me to bring and that’s just how I play,” Mason said about fitting in with the Norse culture.

From an on-court perspective, Mason brings a lot more than that.

“He’s going to be probably one of, if not the favorite to come out as the 4th region player of the year,” said Kyle Craven, co-owner of Norse Report, an NKU sports analysis website.

Craven said, although brought down to scale, he compares Mason to Tayshaun Prince, former forward for the Detroit Pistons.

“This guy, he’s just dead on Tayshaun Prince, he was so fluid and he never allowed the flow of the game to speed him up. Good shooter, but defense and length are what he was best at. He doesn’t let the game get ahead of him at all.”

Craven, who has spent the last few years studying the game, was quick to give praise for Mason and his ability to control the speed of the game.

“Another comparison for that would be Jamal Murray when he played for Kentucky. I felt like that guy was just in control of every game he was in,”  Craven said. “I don’t know that [Isaiah] is necessarily going to have that quality but at least with the speed at which he plays, it looks like that’s what he could be. It looks like he’s very calculated and smooth with his moves and decision making.”

Mason knows that when he comes to campus next fall as part of Coach Horn’s 2021 recruiting class, the expectations will be high, but like his recruiting process, he is ready for the challenge.