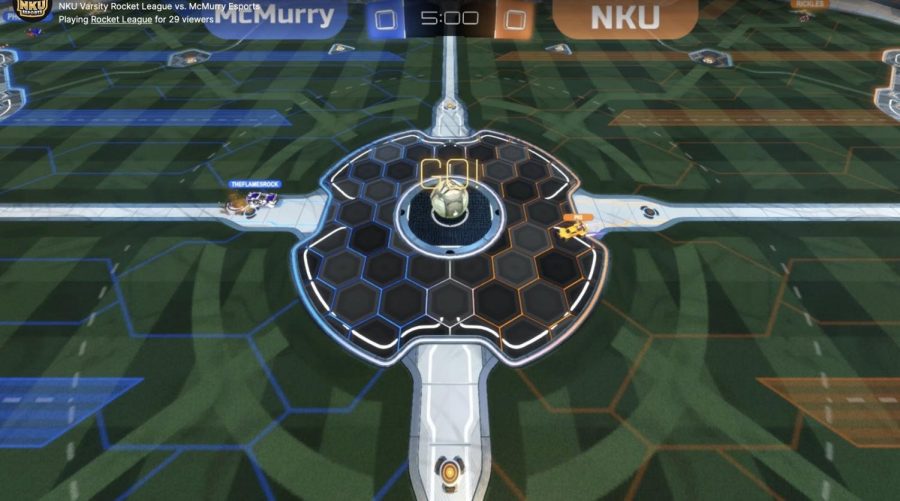 NKU and McMurry prepare for the beginning of the Rocket League match between the two schools.

Rocket League is a soccer video game, in which the characters are vehicles, rather than people. Each player controls a vehicle, and the objective of the game is similar to soccer: score more goals than the other team.

NKU played a total of three games that made up the 3-0 win over McMurry University.

NKU started out strong in this game, within the first few seconds, Rickles scored a goal putting NKU up 1-0. Right after the second possession, Rules scored the second goal of the game.

Pig showed great control of the ball during the third possession, where he managed to sneak it by McMurry’s defense and secure the third goal.

The second game was a little slow to start. McMurry’s only goal for this game occurred after an unfortunate touch by NKU’s Pig, which resulted in him hitting it in his own net. NKU quickly bounced back and remained in the lead until the end of the game.

The last game against McMurry was a battle for NKU as they were close in score. The Norse  managed to win the game, securing the match for a 3-0 sweep against McMurry.

For the second match of the night, NKU battled against Wayland Baptist University.

NKU started off very strong in the first few seconds of the game. Pig went for a shot and barely missed,  but Rickles was there to back Pig up and score a goal. NKU dominated Wayland from the start of the game and  shut out Wayland from scoring.

The momentum from the first game carried over into the second game with NKU scoring a goal within the first 12 seconds after the kickoff. NKU really started picking up the pace toward the middle of the game by leading 4-0 with 3 minutes and 10 seconds remaining. The Norse closed out the game with a 6-2 win.

The last game of the match against Wayland University was intense toward the end as Wayland clawed their way back to a one goal deficit. NKU’s defense held Wayland off and secured the 3-2 win, earning NKU their second 3-0 sweep of the night.

The NKU Esports Club is undefeated in not every match, but every game played leaving them with a 12-0 record. Follow this link to watch the games from last night on Twitch and follow NKU Esports Club for more information on the club and when they’ll be playing next.