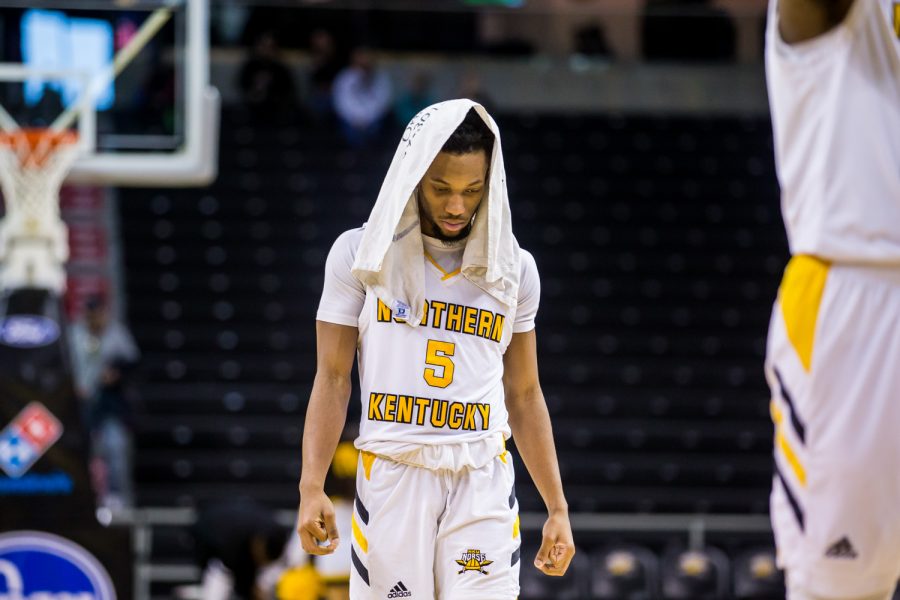 The Northern Kentucky Norse men’s basketball team was out-hustled and out-played on Sunday afternoon, as the University of Illinois-Chicago Flames came into BB&T Arena and handed the Norse a crushing 73-43 defeat.

The 30-point loss was the second-largest margin of defeat for the Norse during the 2019-20 season. The loss also snapped NKU’s five-game winning streak, which began on Jan. 31 with a road win over Green Bay.

UIC got off to a hot start early on, jumping out to an 18-7 lead within the first nine minutes of the first half. The onslaught would continue from this point on, as the Flames then went on a 33-6 run to close out the first half.

UIC carried a whopping 43-18 lead into the locker room at halftime, despite a 5-0 run from the Norse before the break.

The second half was more of the same story for NKU, as the Flames continued to defeat them on the defensive glass, while continuing to shoot a high percentage from the field. Senior guard Tarkus Ferguson led the way for UIC, contributing 14 points, 6 rebounds and 3 assists in the contest.

With just under four minutes remaining in the game, the Flames stretched their lead to 40 points, the largest deficit the Norse have faced all season long. To end the game, a 10-0 run by the Norse was led by reserve players grad student guard Karl Harris and redshirt junior guard Tre Cobbs, reducing the lead to 30.

Three-point success was a turning point in this game, as the Norse struggled to knock down the 3-point shot consistently. The Norse missed their first 13 3-point attempts in the contest, before sophomore wing Bryant Mocaby’s three-pointer broke the skid with under a minute to go in the first half.

Another area of weakness for the Norse on Sunday came on the glass, as the Flames dominated the Norse in rebounding, finishing the game with a 49-30 advantage in that department. Senior Godwin Boahen led UIC with 9 rebounds.

NKU Head Coach Darrin Horn spoke about his team’s lack of assertiveness and physical toughness throughout the contest.

“I don’t think it’s one bad game. I think it is the book on us now. If you get physical with us, we are not going to fight back.”

Horn continued, “In a game where we missed 46 shots, we didn’t get many offensive rebounds. They were the more physical team and more aggressive, and there just wasn’t a lot of fight from our guys.”

The players understood that they needed to be tougher, both physically and mentally, in order to win important conference games such as this one.

“We have a target on our back,” redshirt junior Jalen Tate said. “We have beaten teams that way, so for them to want to come back at us on our home floor is definitely understandable.”

Senior shooting guard Tyler Sharpe added, “We just have to come in and be ready to compete every single day, and know that nothing is going to be easy, no matter who we’re playing or when we’re playing them.”

With NKU’s loss, combined with Wright State’s victory over IUPUI on Sunday, the Norse now trail the Raiders for first place in the Horizon League standings by two games. The two teams will meet at BB&T Arena in the regular-season finale on Feb. 28.

Despite the disappointing result on Sunday, the Norse remain focused on the task ahead, which is getting to the NCAA Tournament in March.

“We’re still a really good team and we do the right things and come to play the right way, so we just need to put this one behind us and get back to work tomorrow,” Tate said.