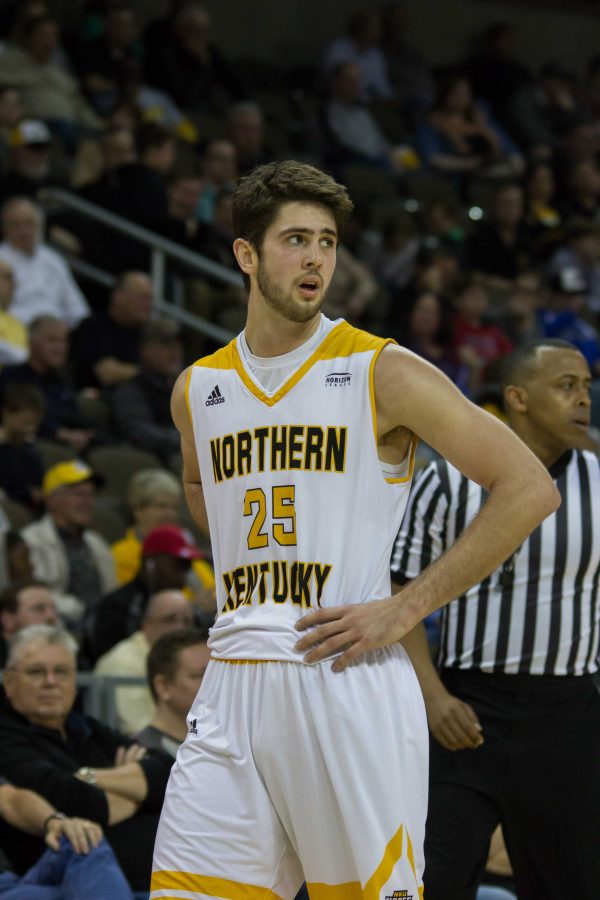 Cole Murray, a 2017 graduate and men’s basketball star, had his jersey retired by his high school on Jan. 25. Murray was instrumental in NKU’s first appearance in the NCAA Tournament and graduated with 259 career 3-pointers and scored a total of 930 points.

Looking forward to seeing this guy back at Delphi HS
What a Class Act as an IHSAA Basketball Player and a Class Act playing in the NCAA with Northern Kentucky University.
Newest member of the Oracle Hall of Fame
#25 will be retired ! Congrats to Cole !@NKUNorseMBB @OracleBball pic.twitter.com/CYqmNiIgM8

“It was special to be inducted into the Hall of Fame,” Murray said. “Having my number retired because—to be completely honest, people [have] been asking me about it recently, that’s not anything that was at the top of my mind when I was playing in high school. It was playing basketball with my childhood friends I grew up with, just having a good time and just winning a bunch of games.”

Kevin Simms, the current athletic director at Delphi, wasn’t there when Murray attended. Instead, he coached against Murray in his high school days. Simms mentioned that Murray was the kid they were always trying to figure out how to stop.

“He was a terrific scorer in high school,” Simms said. “All of our game plans were based on when we played Delphi Community High School, it was trying to figure out how to defend Cole Murray, that’s for sure.”

Besides Murray, only four other jerseys have been retired at Delphi High School. Each player with a retired jersey had “tremendous High School careers in their individual sports, but they also went on beyond high school and had tremendous college careers,” Simms said. The first jersey retired was in 1973 belonging to Pat Manahan, the all-time leading scorer of Delphi with 2,003 points.

During Murray’s time at Delphi, he helped break an 11-year streak of the team not making it outside of district play. His senior year, Murray—along with six other seniors and several underclassmen—decided it was time.

“[That mentality] culminated in us getting a sectional championship and making it to regional for the first time in 11 years and that’s still something, to this day, that I hold dear to my heart,” Murray said. “To see the banner up at our gym, and knowing that we accomplished something as a team, and all the other individual stuff is honestly, secondary.”

When Murray initially got the email, he didn’t realize the magnitude of the message.

“Wow. I made an impact on the school. Stuff that not only what I did, but what we did as a team those four years meant enough to where they would want to retire my jersey and induct me,” Murray said.

Murray made a note to invite as many of his former teammates and classmates as he could.

Simms noted that Murray is a “tremendous kid” who is a well-respected student-athlete at Delphi.

“We were honored to have him back and he, without a question, is one of our most outstanding athletes of all time,” Simms said.

The Delphi, Indiana native made the move to NKU for the connections made with the coaching staff, the facilities, the academia and the area was one he soon fell in love with. During his freshman year, NKU started its transition to Division I, but they wouldn’t be eligible for postseason play for several more years.

“I knew that coming here, I wouldn’t have the chance to play the tournament or do any sort of postseason activities until my senior year,” Murray said. “But it was more so trying to build a foundation and lay the groundwork for it to become a successful Division I program.”

Murray now resides in the Northern Kentucky area and works in pharmaceutical sales. He might have graduated, but he still cheers the Norse on like he’s still playing.

“I never got to play with Sharpe but JT, Walt and Tre were all freshmen my senior year,” Murray said. “It’s been awesome to see them develop and know them personally that way and watch them progress in their careers and see them be successful now.”