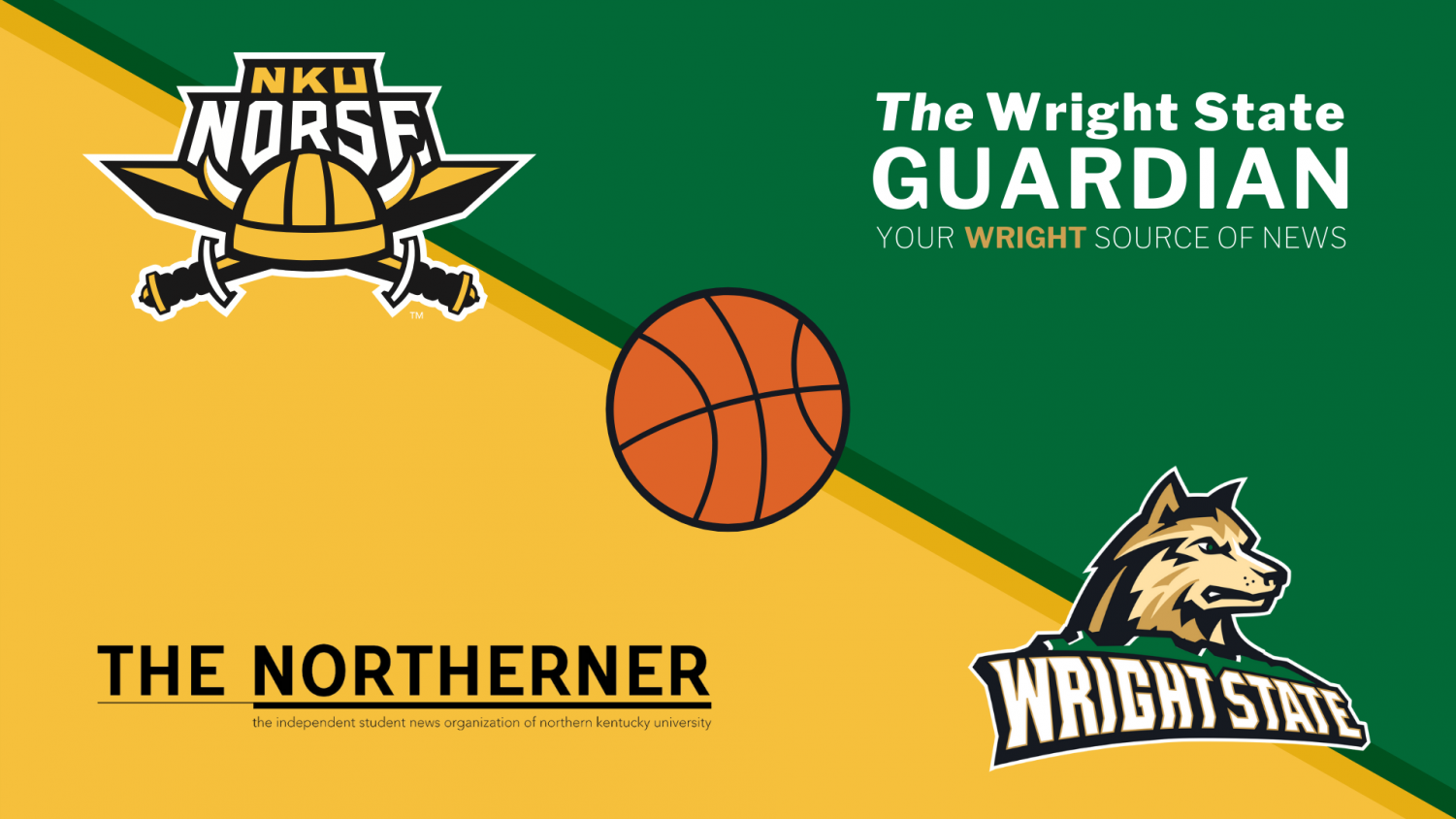 NKU v WSU: Who will end on top?

Wright State University (WSU) and Northern Kentucky University (NKU) hold the most intense rivalry in the Horizon League, starting in 2015 when NKU joined the league. NKU and WSU have fought back and forth for years, taking turns earning Horizon League titles and going to the NCAA Championships.

“Our biggest rival every year since I’ve been here has been Northern Kentucky,” said Scott Nagy, head coach of WSU Men’s Basketball. “They’re the closest school in the league. Even if neither one of us were any good, we would have that rivalry built, and the fact that we’re both good just kind of ups the intensity.”

This intense, long-term rivalry began in July of 2015 when it was announced that NKU would be joining the Horizon League. The addition gave WSU their first national geographic rival since Butler University left the league a few years before. From 2015 until now, WSU and NKU have put students and fans on the edge of their seats for each and every one of their games.

“I think the biggest thing about playing in a game like Wright State is that we know they are a really good basketball team, but we respect everyone in our league,” said NKU men’s basketball head coach, Darrin Horn. “Obviously right now, they are in first and we are in second [in the conference.] There is some implication, but that implication is in January. We feel like every game on the schedule is important.”

On Saturday, Jan. 9 of the 2015-16 season, NKU and WSU renewed their DII rivalry that saw 26 contests. Wright State was NKU and former Head Coach John Brannen’s first ever home Horizon League match up. The game ended in WSU’s favor 60-46. At halftime, the Norse were up 28-27, but during the second half, the Raiders shot 50 percent from the field and 60 percent from the 3-point line. The Raiders held NKU to 18 points for the half; NKU’s shooting went from 63.16 percent the first half to 22.73 percent in the final.

At the time, Raiders junior guard Mark Alstork led the pack with 18 points, followed by senior forward JT Yoho with 13 points, and senior guard Joe Thomasson with 11 points and seven rebounds. None of the Norse broke double digits. The leading scorer for the Norse was senior forward/center Jalen Billups, who broke into the 1,000-point club with a dunk. Billups was one point and one rebound shy of a double-double.

The Norse and Raiders met up for a second time on Feb. 20 at the Nutter Center, starting the DI rivalry off 2-0 in WSU’s favor. This game was more evenly matched opposed to the game a month before. At the half, Wright State had the lead 32-27 and even built their lead to 13 points, but the Norse took a run to bring the game within three. Thomasson still a leading scorer against the Norse with 10 points. Senior center Michael Karena took over for the Raiders with 17 points and sophomore guard Grant Benzinger followed with 16 points.

Wright state went on to play in the finals of the Horizon League tournament, losing to Green Bay 78-69.

This season, NKU made a clean sweep against the Raiders, granting them their first appearance in the NCAA tournament. In every contest, Alstork was either the top scorer or in the top three with 20 or more points.

In the first match of the season Alstork lead with 27 points, shooting 4-of-8 from the 3-point line. He was followed by junior guard Justin Mitchell with 18 points and senior forward Steven Davis with 15 points. McDonald led NKU to their 83-79 win with 20 points and seven rebounds. Senior guard Cole Murray and freshman guard Carson Williams had 14 points a piece.

The following contest was another close game with a score of 83-76 in NKU’s favor. Alstork again was the leader in points for the Raiders with 24 points and eight rebounds. Benzinger followed with 20 points and Davis had 13. NKU had Murray leading with 23 points, shooting 5-of-10 from the 3-point line. Senior guard Lavone Holland II had 19 points, six assists and five rebounds. McDonald scored 18 for the night.

The last match of the season was in the first round of the Horizon League tournament. Benzinger kept the Raiders in tow with 29 points, Alstork and Mitchell had 22 and 12 points, respectively. NKU’s 82-77 win carried them onto the next round of the tournament where they eventually grabbed their first Horizon League Championship. In that game, four Norse scored in double digits, led by Williams with 17 points.

During the 2017-18 season, NKU lost only three times in Horizon League play: twice to Wright State and once to Cleveland State. Post-season, the team went on to play the University of Louisville in the NIT, losing 66-58.

Wright State lost to four conference opponents: Cleveland, IUPUI and Milwaukee twice. The Raiders went on to post-season play, defeating Cleveland State in the Horizon League finals 74-57. The Raiders took the trip to Dallas, Tex. and faced no. 3 University of Tennessee; WSU lost the battle 72-47.

NKU and WSU started the year off with a Thursday night game at Northern Kentucky. Both teams were in a tie and fighting for the first place spot in Horizon League play. In an extremely close 84-81 decision, but WSU took home a win and a league record of 5-0. WSU not only took the first place spot in the league, but also broke NKU’s 13-game home winning streak. The Raiders ended the night 13-5 overall, adding another win to their previous five in a row. The Norse fell to 4-1 in the conference and 11-6 overall.

Almost a month later, it was time for NKU to step into the Nutter Center for another round. NKU fought tremendously throughout the entire game, but unfortunately, it just wasn’t enough to keep up with WSU. NKU was always just short of catching up to the Raiders, but eventually, the timer ran out with a final score of 69-67.

NKU started last season off strong, ready for the WSU game with a Horizon League record of 3-1, compared to the Raiders’ 2-2 record. Truly anyone’s game from the beginning, there were seven lead changes and 10 different ties, keeping everyone on their feet in anticipation.

It was yet another close game between the two rivals, but NKU came out on top for a home victory in a four-point game. With the final score of 68-64, the win brought NKU to 14-4 overall as WSU fell to 8-10.

A month later, the Raiders were given a chance to redeem themselves, this time on their own court. Down 16 points in the first half, the Raiders made a huge comeback, taking the lead and eventually winning the game. By the eight-minute mark, the score was 37-24 NKU and it seemed that WSU would not catch up.

WSU continued to put the ball in the basket though, and by half time, the score was 49-44 NKU. The Raiders continued to push through and eventually took the first lead of the game, 54-53, with just 15 minutes left on the clock. The score bounced back and forth until the last minute, with the final being an 81-77 win for the Raiders.

The win put WSU in a tie with NKU for first place in the Horizon League. With both teams 10-4 in Horizon League play, WSU went to 16-11 overall and NKU went to 20-7. After a win for both teams in the regular season and a tie for the title, it was anyone’s game as they met in Detroit for the conference tournament.

In an intense fight for the win, NKU took the Horizon League Tournament Championship title for the second time in three years, ending the season with a 77-66 win over the Raiders.

The Norse entered into the NCAA tournament, falling to no. 3 Texas Tech in the first round. Although WSU lost the tournament, they received their first-ever bid to the National Invitation Tournament.

Currently, the Raiders have a record of 17-4 overall and 7-1 in conference play. They have won 10 of their last 11 home games.

NKU is sitting just behind WSU, coming off of a five-game winning streak with a conference record of 6-2 and an overall record of 14-6.

The winner of Friday night’s game will finish first place in the Horizon League. With WSU sitting first and NKU in a close second, it could be anyone’s game.