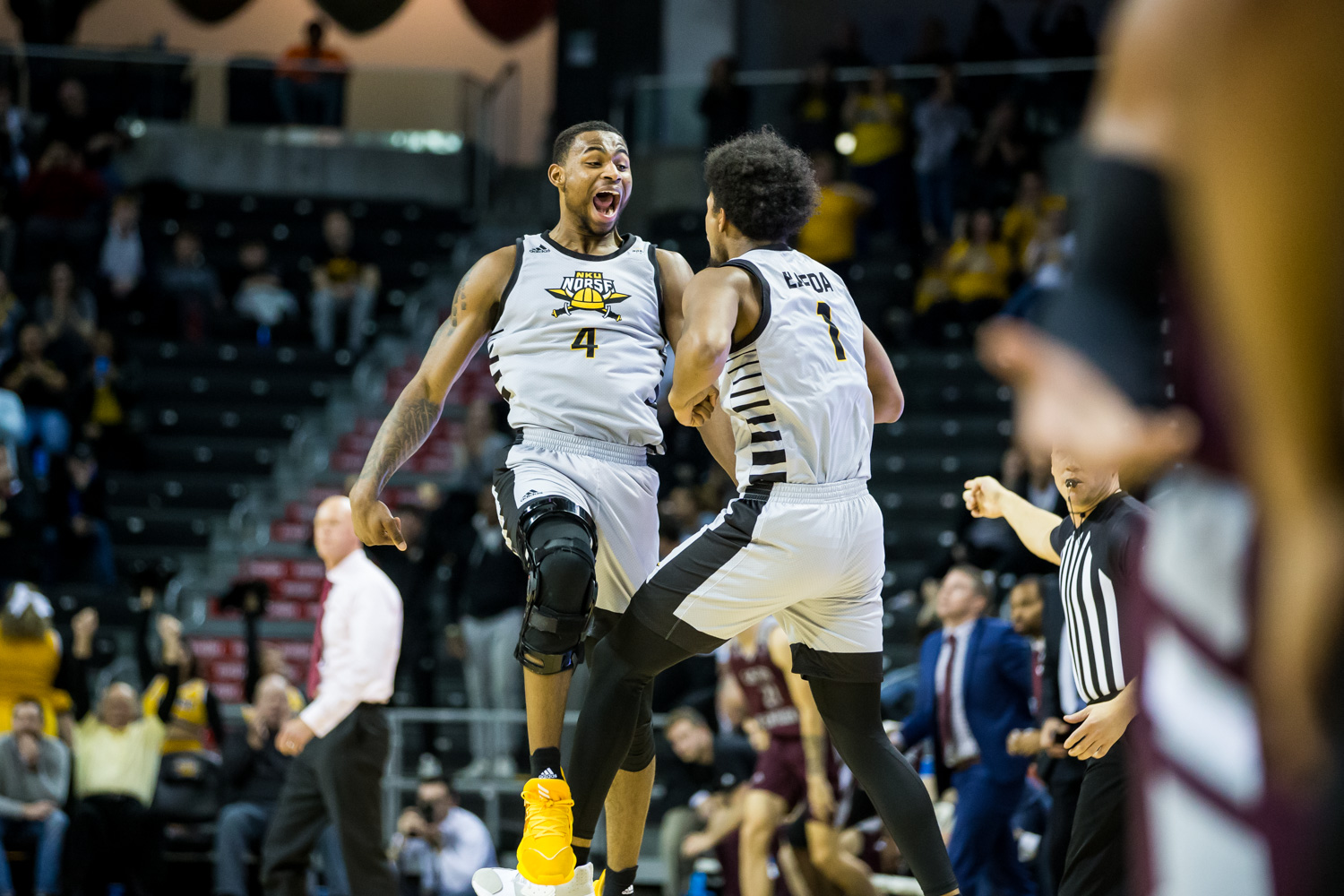 Adrian Nelson (4) celebrates with Adham Eleeda (1) after a timeout called by EKU. The Norse defeated EKU 76-57.

Five Norse were in double digits against Eastern.

The in-state battle Sunday night ended in NKU’s favor with a 76-57 win. The Norse are now 7-3 on the season. Senior forward Dantez Walton was one rebound shy of a double-double with 18 points and nine rebounds. Sophomore guard Trevon Faulkner also had 18 points and led in assists with seven. Sophomore guard Bryson Langdon had 14 points, shooting 5-of-6 from the field with four assists and rebounds a piece. Senior guard Tyler Sharpe and sophomore forward Adrian Nelson had 10 points a piece.

NKU opened the game with a 3-point shot that was no good, Walton rebounded and passed to Faulkner for a layup. EKU quickly got up to a five point lead after that. EKU pressed the Norse in the back court making it difficult for them to get the ball up the court. NKU remained behind the Colonels until the Norse took control with a 13-0 run. Sharpe and Eleeda each contributed a big time 3-pointer and Walton added a spin move down in the post for two.

The score tied four times on the way to halftime. Langdon scored the last bucket for the Norse with 40 seconds left leaving EKU time to answer with a layup. Ending the half 35-35.

EKU opened the second half with a 3-point bucket but NKU answered back by going on a 12-3 run with five points from Langdon. Faulkner looked down the court to Nelson for a lob, Nelson gave a nice dunk to bring the Norse to a six point lead, 58-52.

“[EKU] were pressing the whole game pretty much so what coach emphasized is when I’m in a press just get back,” Nelson said. “They pass it down to me, wide open, I dunked it.”

The Norse continue to score in transition. In the last few minutes of the game Nelson scored back-to-back-to-back layups. Faulkner hit the last layup of the game to bring the score to 76-57.

“We kind of got [EKU] to wear down towards the end,” Sharpe said. “We got stops and we got out on transition and that’s when we got to push the ball a little bit and get easy layups, like [Nelson’s] dunk and got Walt… a layup in transition.”

NKU won the rebounding game 39-22. From the field the Norse dominated with 58.3 percent and 80 percent from the free throw line. In the paint NKU had 34 points and committed 21 turnovers for the game. NKU held EKU to only score six second chance points.EKU shot 38.3 percent from the field for the game and had 22 points down low. EKU was able to keep their turnovers down to 13.

“Against the team that presses this much, I think they came into the game top five in the country in turnover percentage or something like that, you’re going to turn over some,” Horn said. “But what we are trying to focus on before the game and during the game was reminding them can’t bring the ball up the sideline… really just kind of grade school fundamental stuff.”

The Norse will now take on Illinois State next Sunday, Dec. 15th at BB&T Arena. The game is at 2 p.m. and will be broadcast on FOX Sports Ohio.