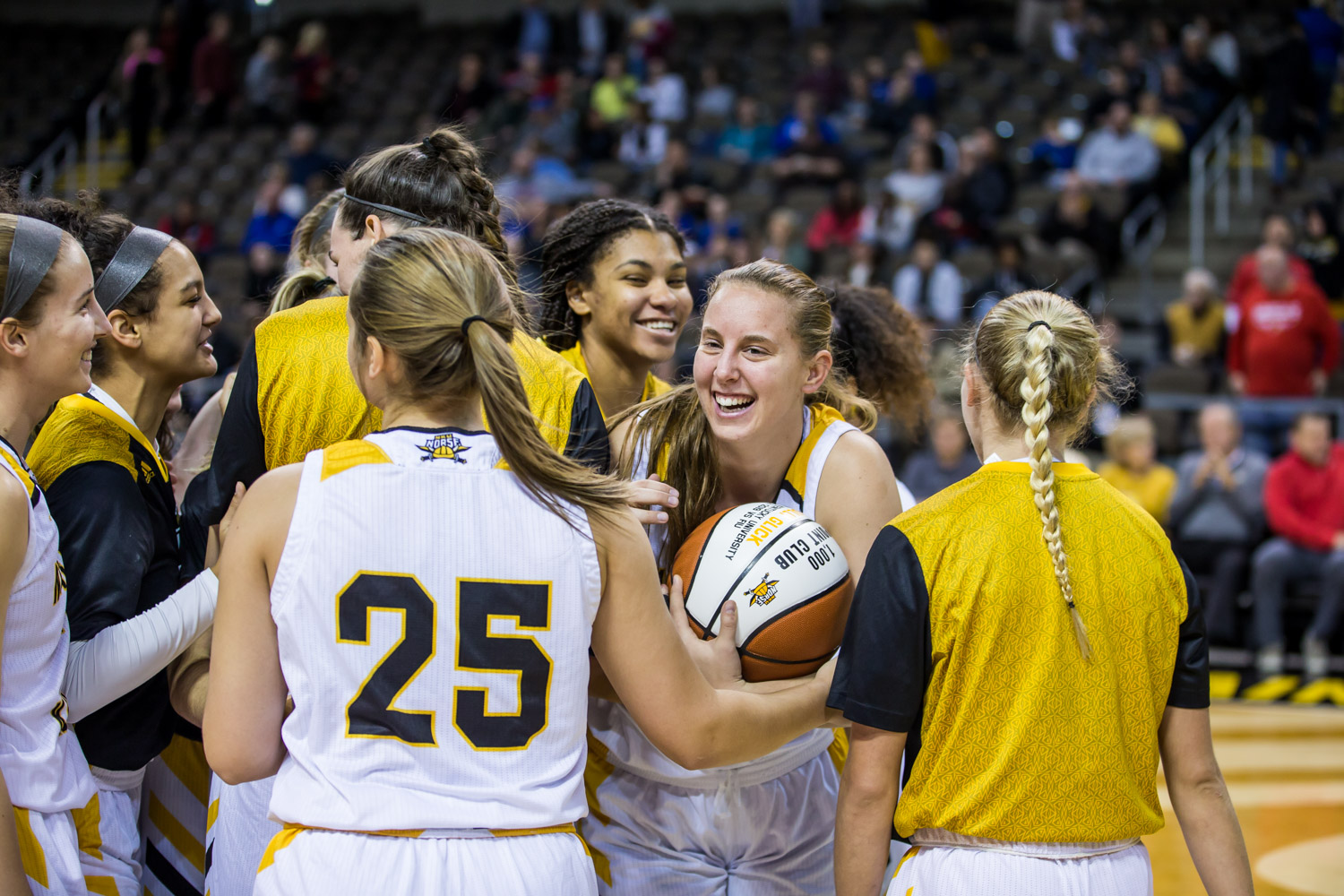 Molly Glick (24) celebrates with her teammates after receiving her ball from Women’s Basketball Head Coach Camryn Whitaker for accumulating the 1000 career points.

Louisville Cardinals use second half spurt to put the Norse away, 85-57 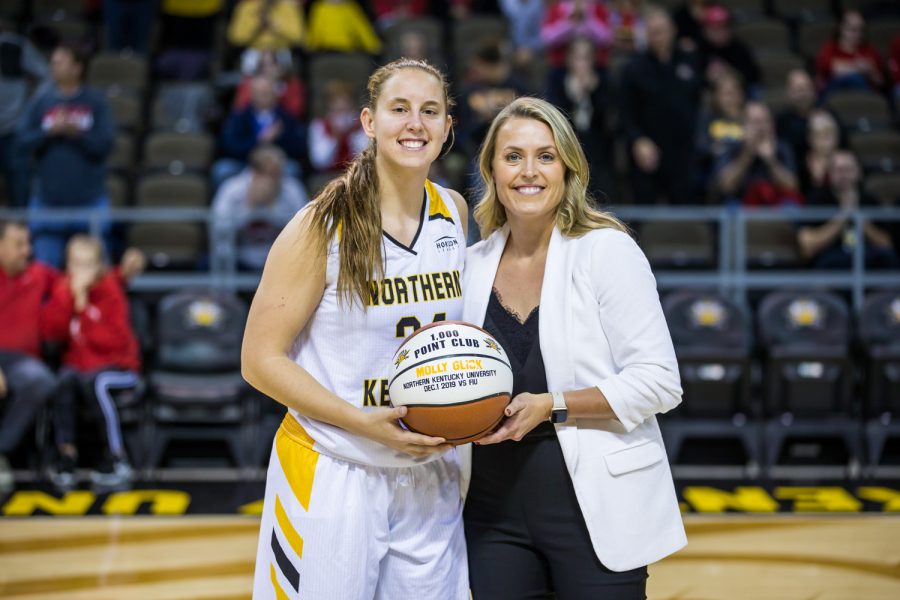 The Northern Kentucky women’s basketball team fell to the no. 2 ranked Louisville Cardinals this afternoon 85-57.

Prior to the start of the game redshirt senior guard Molly Glick received a ball for achieving her 1,000th career point during their Florida tournament. While the final deficit shows a 28 point loss, the score does not tell the full story.

Glick and freshman guard Carissa Garcia led the Norse with 13 points a piece. Glick shot 3-of-7 from behind the arc while Garcia led in assists with five and grabbed three boards. Sophomore point guard Ally Niece also scored in double-digits with 12 points.

For the majority of the game the Norse ran a 2-3 zone attempting to offset the height advantage that Louisville had on them.

The Norse opened the game on a 7-1 run, which set the tone for the first half where the Cardinals had to rally from numerous deficits. Louisville made a push back after falling down six, only for the Norse to quickly retake the lead 9-8. With 3:19 left in the first period the Norse once again took the lead 14-13 from a Niece jumper. Louisville closed on a 9-2 run to lead at the end of the first quarter, 22-16.

The Cardinals came out of the locker room and opened the second half with a 10-0 run. Pushing their lead up to 47-35 with 7:15 remaining in the third quarter. They would continue to stretch this lead throughout the period, getting it all the way up to 68-44. This is a deficit that the Norse could not erase.

“I challenged our team in the last five minute segment, make sure we keep them under 90 points, and let’s not lose by 30,” Head Coach Camryn Whitaker said. “We accomplished all of those goals, and that’s really what our entire game plan was about, it was about five minute segments.”

During the fourth quarter the intensity and effort from the Norse never dropped. While the Cardinals stretched the lead to 33 with two minutes to go, the Norse never quit as they closed out the game on a 9-4 run.

Whitaker discussed how pleased she was with her team’s effort throughout the game.

“For us to play the half (first) that we played, shows me how far we’ve come,” Whitaker said. “It’s hard to see that when you look at the scoreboard and you’ve lost by 28 points.”

After the game Glick discussed her three point shooting, as well as the team’s overall performance.

Niece detailed the two halves for the Norse, and what changed during the second half versus the first.

“I think in the second half since we were so close, we were kind of like pressure, pressure, pressure! When we should have just let it go,” Niece said. “If you have an open shot, especially against Louisville, you have to take it, especially with the shot clock, and that is a big adjustment for me going from high school to college is the shot clock.”

The loss Sunday snaps the Black and Gold’s four-game winning streak. Up next for the Norse is a battle with the Indiana State Sycamores. The game is scheduled for Monday Dec. 16. Tip is set for 7 p.m. and will be broadcast on ESPN3.