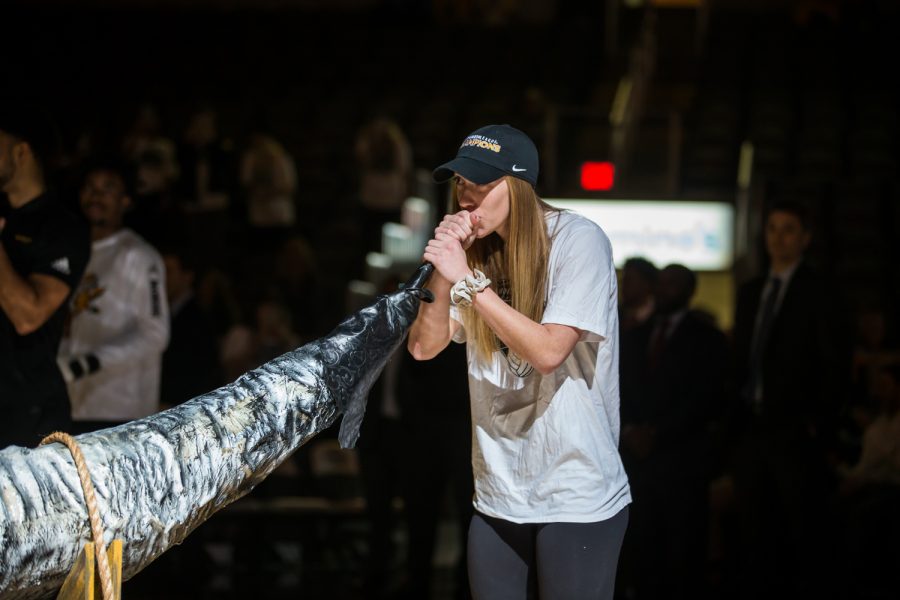 Gallery|9 Photos
Colin Johnson
NKU Volleyball player Laura Crawford blows the horn at the beginning of the Men's Basketball game against Midway. Crawford was named the tournament MVP in the Horizon League Tournament, which the Norse won yesterday.

For the Norse, this game was more about focusing on their areas of improvement, especially with the rigorous schedule.

“This is our fourth game in eight days, which is brutal,” Head Coach Darrin Horn said. “But I think it’s good to see them responding and get the opportunity and minutes tonight, to be able to go out and produce some things and hopefully build some confidence and grow from it.”

Langdon opened up the game with a layup. On the way to the rim, he was fouled but did not convert the free throw. Langdon later hit two 3-pointers back-to-back, bringing the lead to 14-5. There was plenty of play down in the post, with a two hand jam by sophomore forward Adrian Nelson and an assist from Langdon down to redshirt junior forward Silas Adheke to bring the score to 26-13.

Eleeda had back-to-back looks at the three and sank them both. Harris stayed on the backboards, with two offensive putbacks within the last 5:21 of the half. Harris was also sent to the line before the half, sinking both of his foul shots.

“You know, we had an opportunity that gave a lot of guys who don’t always play that much to get out there and get some rhythm in and we played well,” Harris said.

“I thought Bryson [Langdon] was really good tonight,” Horn said. “I think he continues to get better. You know, he’s a guy that’s that’s adjusting to the game and the way we want to play at this level, but I thought he did a really good job of playing under control tonight and making good decisions as well.”

After halftime, the Norse continued to stretch out their lead. Harris started the half with a layup. Langdon swished a pull up jumper over the Eagles to bring in the 54th point for NKU. Sophomore center David Wassler scored the last points for the Norse with a post move down low.

“For me, it was just rebounding,” Harris said. “Coach challenged me this week just to get into the glass more and working harder on that side of the ball.”

The Black and Gold maximized their opportunities in the paint, with 46 points down low and out-rebounding the Eagles 43-30. The largest lead of the game was 36 points, with 4:48 left on the clock at 80-44. Every member of the men’s basketball team that played put points on the scoreboard.

“We’ve got a team. Guys you saw tonight could have some depth, could develop some depth,” Horn said.

The Norse will face Arkansas, picked to finish 11th in the SEC preseason poll, on Saturday, Nov. 30. The game tips at 5 p.m. ET/4 p.m. CT. The game will be broadcast on the SEC Network.