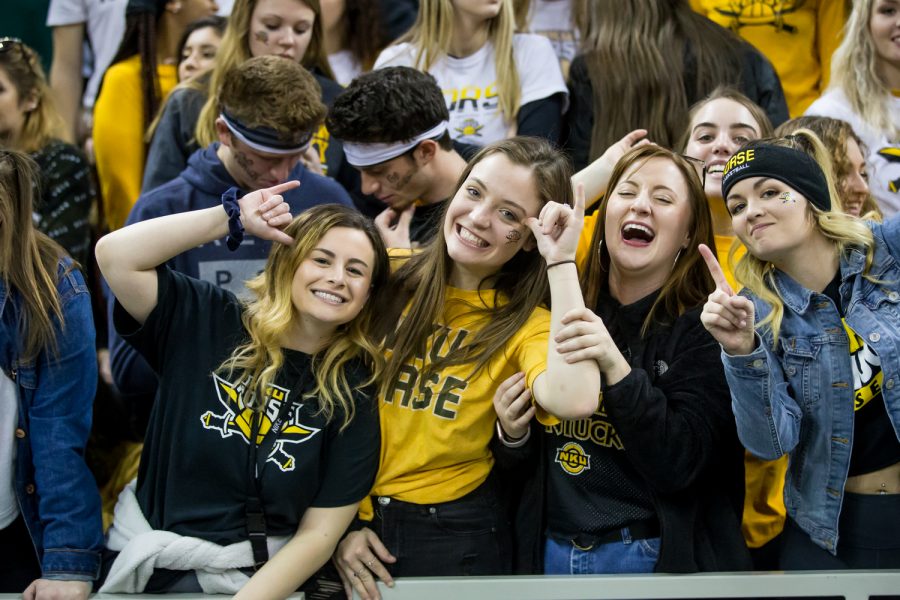 NKU fans pose during the homecoming game against Oakland. The Norse defeated Oakland 79-64.

How NKU athletics plans to get fans in the door

With NKU’s basketball program growing massively in the past few years, including two trips to the NCAA tournament and one bid to the NIT, the athletics department is doing all that they can to ensure students, alumni and local residents are making their way down to BB&T Arena to cheer on the Norse—including a new promotion that will send students home with $1,000.

“The success that they’ve seen on the court, I think that really echoes the growth that the university has seen as a whole,” Lydia Abner, athletics coordinator of marketing and promotions, said.

Attendance numbers really took off in the 2016-17 season, when NKU finished its reclassification to Division I, with a 22.97 percent increase in attendance. That same year, the team made the NCAA Tournament in just their first year of eligibility, and the number of fans in the stands next season increased by 44.9 percent.

The men’s team not making the tournament in the 2017-18 season caused the number of Norse fans in BB&T to slightly dip during the 2018-19 season, but the team returning to the tournament last year combined with the excitement of a new head coach has given the athletics department their highest number of season ticket sales ever.

“We’ve just been trying to get more information out there and reach out to all kinds of different groups,” Micki Ford, coordinator of athletics ticketing, said. “I feel like our fans are pretty interested now in the basketball program.”

In an effort to keep attendance growing, athletics will be running several promotions throughout the season—like their new #1kfor1k promotion. For all men’s basketball spring conference games, if 1,000 students show up, one student will leave BB&T Arena $1,000 richer. The promotion starts Jan. 16 at home vs. Youngstown State.

According to Abner, the idea came from new Head Coach Darrin Horn. Generally, the three games every year to have a thousand students in attendance are the home games against conference rivals Wright State and Oakland and the homecoming game.

“The idea is, ‘how can we get five or six games with 1000 students?’ and not just those guaranteed three,” Abner said. “Once the spring semester starts, every time we have 1000 students in attendance, we will randomly select one of those students … and that person will win $1,000.”

Special theme nights, where students will be encouraged to dress up in different costumes, including a ‘90s night, prom night, a PJs night, a ‘gold rush’ and a whiteout game will occur on various home games. Several of the games will feature a happy hour with discounted beer from the local Braxton Brewing Company that begins when the doors to BB&T Arena open.

The fan-favorite Domino’s Pizza promotion, where 80 points from the home team means fans can turn in their ticket stubs to Domino’s for a $1 pizza, is returning. Tailgates will also be back, with tailgating events taking place the day of the home games against Texas Southern, Youngstown State, Oakland, Detroit Mercy and Wright State.

The women’s team initially received a large boost in attendance from the shift to DI. However, a poor overall record has led to a stark decline in attendance the past two seasons.

This year, there will be several reasons to turn out to see the women’s team—including a home game against the nationally renowned Louisville Cardinals, who reached the Final Four in 2018 and have historically been one of the top five teams in the United States.

“Their head coach was actually a player here. He played for the men’s team, and is from Fort Thomas, which is a cool connection,” Abner said. “We’re expecting a lot of people to come out that day.”

The Hoops for Health event also returns, with the women’s team playing a game in the middle of the day and inviting different elementary schools in the area to bring their students. The event is intended to be simultaneously fun and educational.

“During the game, we have videos of the women’s players doing jumping jacks, getting everybody out of their seats to be active and do some exercises. We do trivia questions about ‘how many fruits and vegetables are you supposed to eat?’” Abner said. “They’re coming to watch the basketball game but they’re also receiving … those educational pieces, which make it a really cool event.”

Abner has only been working at NKU for three years, but in that short amount of time she’s noticed that athletics and the university as a whole have significantly changed for the better, and that attendance has risen because people who attend classes here really care about NKU.

“I think it’s a combination of the rich culture and history of [NKU], and the excitement of going Division I,” Abner said. “People want to be involved and be a part of that.”