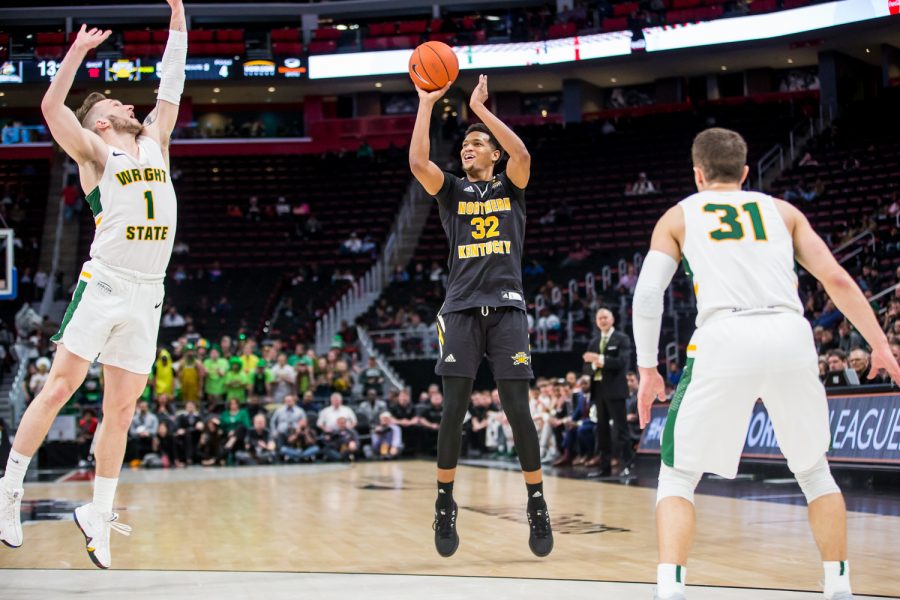 Dantez Walton (32) shoots during the final game of the Horizon League Tournament against Wright State. Walton shot 5-of-11 on the night and had 15 points.

3-point line, shot clock and technical fouls to be changed in the upcoming season.

The NKU men’s basketball team not only has a new look to them this upcoming season, but new rules, according to NCAA.

Starting in the 2019-20 season, the Division I men’s college basketball 3-point line will be extended to the international distance of 22 feet and 1 and 3/4 inches. The NCAA Playing Rules Oversight Panel approved moving the 3-point line after the men’s Basketball Rules Committee members received positive feedback.

The feedback was from the annual rules survey of the coaches who participated in the 2018 and 2019 National Invitation Tournament (NIT). During the tournament, the international 3-point distance was used as an experimental basis.

“It’s not too big of a difference,” senior guard Jalen Tate said. “It comes with the reps, it’s a little getting used to. Sometimes you’re stepping on the line in the corners, you have to keep from stepping out of bounds, but for the most part, it comes with the reps you put in every single day.”

The committee cited these rationales for extending the line:

Due to the financial impact of placing a new 3-point line on courts, this change won’t take effect in Divisions II and III until the 2020-21 season.

The panel also approved resetting the shot clock at 20 seconds after a field goal attempt hits the rim and the offensive team rebounds the ball in front court. The change is being made to enhance the pace of the game. The committee decided against a full 30-second shot clock reset because the offensive team is already in the front court after securing the rebound.

This was another experimental rule during the 2019 NIT.

The panel approved the proposal where players will be given a technical foul should they use “derogatory language about an opponent’s race, ethnicity, national origin, religion, gender, gender expression, gender identity, sexual orientation or disability.”