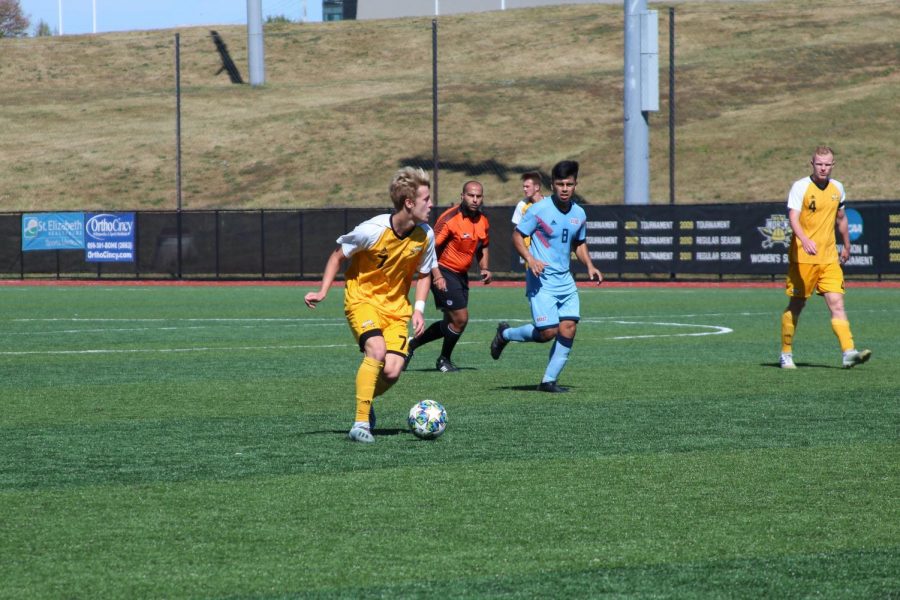 The NKU men’s soccer team wins 3-2 against UIC—the defending Horizon League’s champions—with help from a record breaking hat trick. The Norse advance to 3-5-1 overall and now 2-2 in the Horizon League. The UIC Flames fall to 8-3 overall and 2-1 in the conference.

Junior midfielder Alex Greive broke a nine year record for the Norse. Grieve scored three goals in one game, which hasn’t been done since the 2010 season. The record was formerly held by Michael Holder.

“[Greive]’s a top player; We saw that last year, he was fourth in the country in assists,” Head Coach Stu Riddle said. “And I’ve challenged them in the offseason to have more productivity in terms of goal output. And to do it in a big match, like that, is incredible.”

Freshman goalkeeper Baj Maan opened up the game with three big saves from point blank range. In the 26th minute, NKU fouled in the penalty box granting UIC a penalty kick. Maan wasn’t able to make another save and UIC went up 1-0.

“[Maan]’s been incredible,” Riddle said. “I think it’s disappointing for him and for me as his coach looking at him personally; he hasn’t got the recognition with the shutouts that he probably deserves. But he’s shown again, he’s an absolutely magnificent goalkeeper, arguably the best in the league already.”

The first shot on goal for the Norse didn’t come until the 27th minute from senior midfielder Rikard Lindqvist. The shot was wide and high of the goal. The Norse continued to struggle in making another shot on goal.

“I think the one thing we’ve done really well today was keep our head up,” Maan said. “We were down one, nothing at half, which is hard. And then everyone was just so hungry … no one slowed down and … the tempo was always there.”

After the half the Norse came out on the attack. In the 47th minute, Greive scored on UIC assisted by freshman defender Samuel Nwosu, the score is tied 1-1. In the 61st minute it looked as if UIC was going to make another mark on the board, but Maan was there once again to collect another save.

The 77th minute brought another opportunity for NKU to score. The Flames fouled the Norse in the box granting them a penalty kick. Greive took the kick and missed, but was able to rebound the missed shot back into the net. The Norse went up 2-1.

UIC answered not too long after the Norse point with a shot that sailed just inside the post. In the 82nd minute, freshman midfielder Ryan Godding passed the ball ahead to Greive for him to score once again; sealing a new record for Greive. The Norse finish the game on top, 3-2.

“I’m just glad we got the win, that was the priority,” Greive said. “To score three goals is obviously nice, but it’s just a combination of the team’s effort in the second half.”

The Norse increased their shots for the half with eight, the Flames had 10 shots for the period. For the game Maan had five saves, which is on average for the season.

“I think we’ve shown in the last week beating the regular season champions and then tournament champions that we can compete with anyone in this league,” Riddle said. The boys believe that and to come from behind and get a massive six points this week has been incredible for us.”

The Norse take a break from Horizon League opponents and face Division III Berea College on Wednesday, Oct. 9. The game is scheduled to start at 7 p.m. and will be at NKU Soccer Stadium.