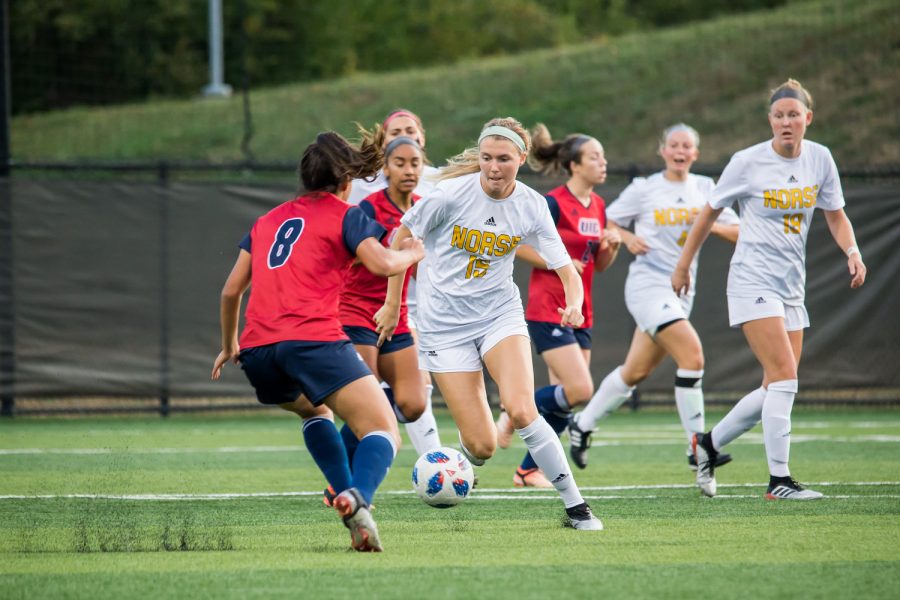 Gallery|10 Photos
Colin Johnson
Kailey Ivins (15) dribbles up the field during the game against UIC. The Norse fell to UIC 1-0 on Saturday night.

The Norse opened up home conference play with a 1-0 loss to the UIC Flames. The Norse are now 4-5 on the season and 1-1 in the Horizon League conference. The Flames advance to 6-3-1 and to 2-0 in the conference.

“[The match] was definitely frustrating because I know that we’re the better team,” senior forward Ally Perkins said. “We knew that we could have easily won this game and we know that we can win the conference. So being one and one this early is very frustrating. And hopefully we just learn, watch film and just fix our mistakes.”

Within the third minute of play, UIC had the chance to score from a corner kick, but NKU was able to defend and push the ball out of the box. The seventh minute looked to be NKU’s first opportunity to score, as junior midfielder Kailey Ivins sent the ball forward to Perkins, who crossed the ball into the box. The ball was then caught by UIC’s goalie.

UIC’s defense held NKU to one shot on goal. Perkins took five shots, but only one was on frame.

“One of our biggest points coming into this game was to play [the ball] to our outside people because we knew they were going to be open,” sophomore midfielder Ashleigh Cronin said. “And I think we did that well. It was just that final ball that we couldn’t finish.”

Senior midfielder Shawna Zaken opened up the second half with an opportunity to score, but the UIC goalie blocked the shot, giving the Norse a corner kick opportunity. The Norse scored from the corner kick but it was then nullified due to a foul committed by the Norse defense. In the 70th minute, Zaken headed the ball into UIC’s goal, but yet again, the goalkeeper was there to collect it.

In the 71st minute, Cronin was fouled in the box, giving the Norse a penalty kick opportunity. Ivins took the penalty kick, but wasn’t able to convert. The Flames scored in the 79th minute from a header by sophomore forward Emma Main.

“Early in the second half we challenged our team to really work and they embraced that,” Head Coach Bob Sheehan said. “I thought we had some great balls into space and we really attacked like we want to and it just didn’t go our way.”

The Norse will remain at home for their next match against the Wright State Raiders on Wednesday, Oct. 2. The match begins at 7 p.m. and will be broadcast on ESPN+.