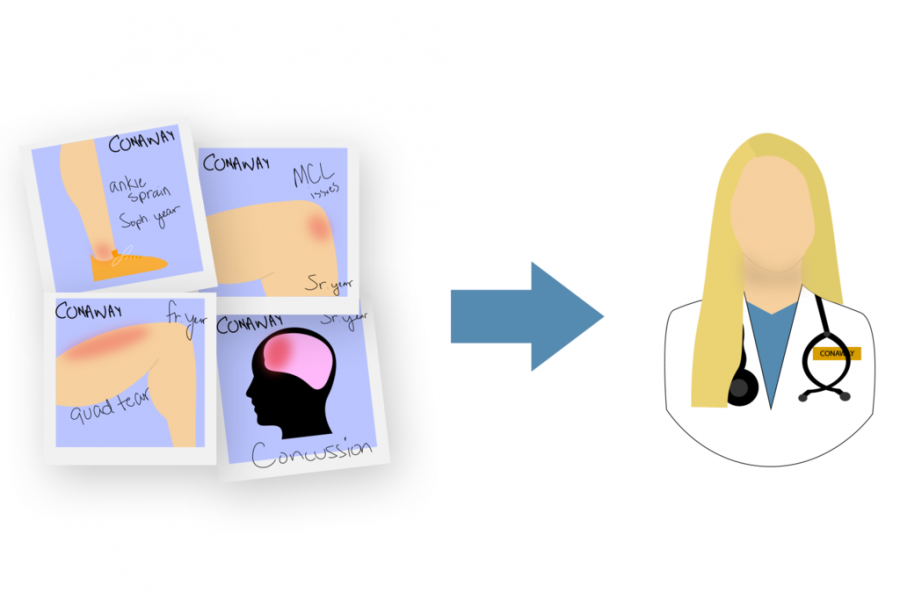 Recent graduate and former soccer player for the NKU Women’s soccer team, Rachel Conaway, is anything but ordinary. During her time at NKU, Conaway suffered multiple injuries—from a torn right quad her freshman year, typical ankle sprains her sophomore year to re-tweaking her right quad senior year. In her final year, she also had MCL problems for a couple of days and a concussion. Despite the hardships and struggles Conaway faced physically, she kept a positive outlook and pushed on.

“It’s hard,” Conaway said. “With a concussion, it’s obviously hard because you have to restrict what you do, you know, you can’t be physically active, you can’t run, you can’t bike. There’s literally nothing and going from, every day being active to not being active, I think it takes a toll emotionally and you feel stressed and you feel kind of hopeless.”

Stephanie James, the assistant athletic trainer, who works primarily with the Women’s Soccer team said, “It’s hard for athletes to be patient and allow their bodies to heal and allow the rehabilitation/treatments to work.”

Being patient and allowing your body to heal was no problem for Conaway.

“If [Rachel] sustained an injury, she was in the athletic training room daily until she was 100%. She would often continue to do her rehabilitation exercises well after she was cleared to play ‘just in case,’” James said. “She was very dedicated to being the best she could be at all times.”

One of Conaway’s previous professors, Dr. Chris Curran, touched on how dedicated Conaway was during her time as a student.

“Rachel managed to compile data from four major behavioral experiments while riding the team bus to and from her soccer matches. Many students would have been sidetracked by the competition, but Rachel found a way to use a wireless hotspot to get access to the data files and get the job done,” Curran said.

Conaway knew what she wanted to do to advance her career and how to get the job done, even if that meant graduating high school early to get a head start.

“I went into undergrad knowing that the ultimate goal after undergrad was med school, but I never really considered the difference between MD’s [regular doctors] and DO’s [osteopathic doctors].”

Injuries are devastating for any athlete, but Conaway said her experience with her injuries and the recovery process from them really started to “drive her passion” for Osteopathic Medicine.

James said an osteopathic doctor is the type of physician who “promote a more holistic approach to their treatments and work to help their patients get and stay healthy.”

Since sports played such a huge role in Conaway’s life, she wants to go into sports medicine when she graduates from Ohio University, where she’s currently studying. Both Curran and James said that Conaway is a gifted individual who took full advantage of her sources here at NKU and will do nothing but grow and succeed as a physician.

Conaway wants to help people the same way she was helped when it came to her injuries.

“Rachel is a very kind, respectful and patient person, I have no doubt Rachel will be an excellent physician,” James said.