NKU Invitational ends 1-2 for the Norse 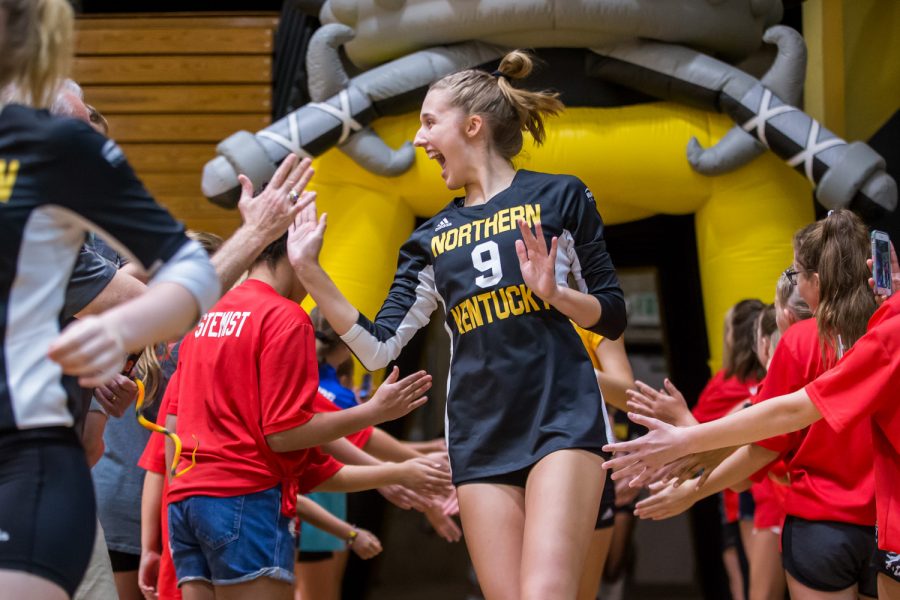 Gallery|12 Photos
Colin Johnson
Natalie Hardig (9) runs out before the game against Notre Dame. The Norse fell to Notre Dame 3-1.

The Norse hosted three top teams in the top 100 of NCAA Division I volleyball over the weekend. The Norse played no. 1 in the MAC West Division Ball State Friday night then faced no. 4 in the ACC Notre Dame and no. 2 in the AAC University of Cincinnati on Saturday night. The Norse finished the tournament 1-2 bringing their season record to 5-4.

The first set started out in NKU’s favor the Norse had the lead the majority of the set. Junior defensive specialist/libero Ashton Terrill had three aces to break away for the lead. The Norse went on to win the set 25-18. The second set was in NKU’s favor by a narrow margin until the Norse went on an 8-2 run to take the lead 23-16. Sophomore middle blocker Natalie Hardig and junior middle blocker Bailey Western had four kills on five attempts.

Ball State made adjustments going into the third set that proved a challenge for NKU. Ball State’s hitting improved to .335 during the set and mustered up five kills on seven attempts. The Norse battled back to tie on the 24th point but Ball State was able to convert the final two points to keep the match going.

NKU hit .196 and held Balls State to .177 hitting and the Norse out dug the Cardinals, 91-88. Terrill recorded a 29 dig match creating a new season high. Senior setter Shelby Olsen racked in her 40th double-double with 25 assists and 10 digs.

The Norse started off the set taking the first point from a kill by sophomore middle blocker/opposite Abby Kanakry. The Norse began taking the lead with the help of a service ace from Terrill. Notre Dame was able to fight it’s way back to a tie at 17. The Norse began to break ahead and take the set 25-19.

Set two Notre Dame began taking the lead. The Norse began being challenged by Notre Dame’s size and the block began to take a toll on the Norse. The Norse lose the match 25-20, Kanakry and sophomore utility player Anna Brinkmann each collected three kills during the set.

The fighting Irish took the lead from the start of the third set. The Norse answer back with a 5-0 run taking the lead 9-7 and remain in the lead until the 19th point in the match. The Norse are able to tie three more times before Notre Dame took the lead an attack error from the Norse.

Set four decided the game. The Norse battled hard to keep the game alive but Notre Dame pulled ahead. Sophomore setter/right side Miranda Wucherer had 26 assists and 5 digs for the game. Senior outside hitter Laura Crawford recorded 15 kills. Both teams had 54 kills each.

The Norse took on cross-river team UC who has an Olympic athlete on the roster, Jordan Thompson. The Norse were able to break the lead open by four points from a kill by Kanakry. NKU took the first set 25-19. The second set UC took the lead and wouldn’t let up winning the set 25-22. NKU’s hitting percentage fell to .122 while UC had a .244 percentage.

NKU scored the first point of the third set but UC quickly took the lead 10-6 with four consecutive points. Once tied at the 20th point, it became a two point difference in the game. A kill by Western from Olsen brought the Norse the point to put them ahead. The fourth set the Bearcats pulled ahead and held onto a four point lead until a soft touch over the net by Kanakry began to dwindle the lead but UC pulled ahead 25-23.

The final deciding set NKU started in the lead and didn’t let up. The Norse began putting together blocks stopping UC from advancing. The Norse took the set 15-9 and took their first and only win of the invitational.

“We just did not want to give up,” Brinkmann said. “We wanted to keep fighting. I mean, we have nothing to lose against this match with UC, so we just kept pushing, kept fighting.”

The Norse totaled 71 kills and kept a .270 hitting percentage over UC’s 65 kills and .234 percentage. Both Kanakry and Briggs recorded career-highs in kills with 11 each. Brinkmann earned all-tournament after achieving career-best 23 kills and hit .386 and added eight digs with only one error.

“Our conference is top 10 in the country,” Head coach Liz Hart said. “We’re [Horizon League] the 10th best out of 33 conferences, so far. So, conference is going to be brutal but you know, playing these good teams … challenges us every single week.”

Before NKU volleyball gets to conference play, they’ll go to Western Kentucky University to play in their Volleyball Invitational. Their first game is against WKU Friday, Sept. 20 at 11 a.m. CT/12 p.m. ET.