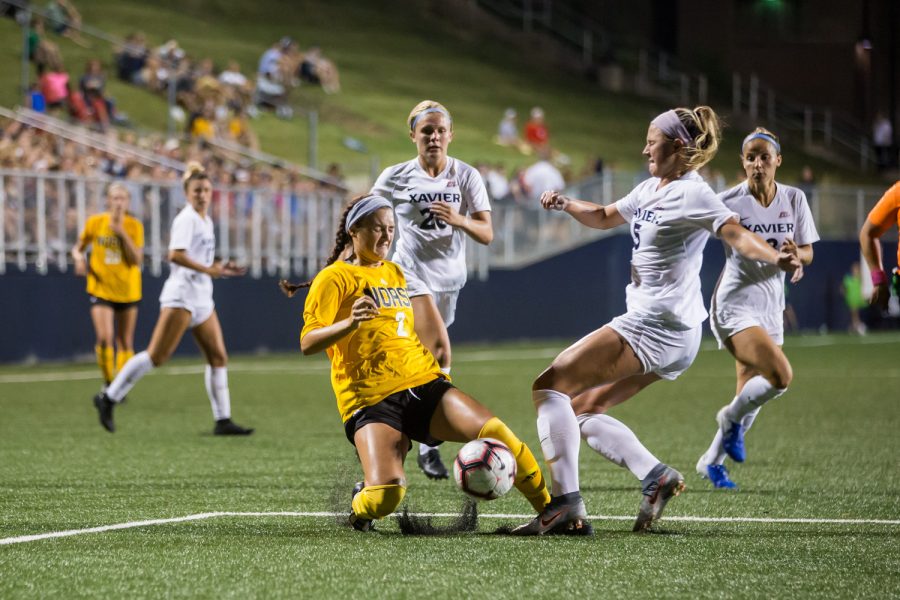 Gallery|10 Photos
Colin Johnson
Kiley Keehan (2) slides to a ball during Thursday's match against the Musketeers. The Norse fell to Xavier 4-0.

NKU’s women’s soccer team falls to Xavier 4-0, making the season record 3-4. Xavier’s record increases to 5-1-1. Xavier ended the game with 22 shots and 13 shots on goal, while NKU finished with one shot.

The first goal wasn’t made until the 47th minute by the Musketeers. Junior midfielder/forward Kailey Ivins was able to get the Norse’s only shot at 73:56. Starting at the 80th minute, Xavier scored three times in less than three and a half minutes.

The first half ended 0-0 with no shots on goal by NKU and 10 by the Musketeers.

The Norse received their first yellow card of the season in the 52nd minute. Head Coach Bob Sheehan said, “that was really not that important… yellow cards are part of the game.”

Xavier never attempted to kill the clock while they were up 1-0. In the last 10 minutes of the game, the Musketeers got hot—scoring three goals in a span of three and a half minutes, with a lead of 4-0 in the 83rd minute. When Xavier put sophomore goalkeeper Caroline Welsh in, she held the ball until approached to help waste the four minutes left in the half.

Sophomore goalkeeper Mimi Stines saw 22 shots and had nine saves. Junior goalkeeper Sarah Cady had her first time on the field this season, logging four minutes in the second half.

The Norse put up a good fight against Xavier, who is picked to go fourth in the Big East with a season record of 5-1-1 so far.

“I think for us, it’s about building a team and putting our players in environments that are going to be prepared for the Horizon League,”  Sheehan said.

Next for the Norse is conference play. NKU will start their conference battles In Indianapolis, IN against IUPUI. The game is set for Friday, Sept. 20 at 11 a.m. The game will be broadcast on ESPN+.