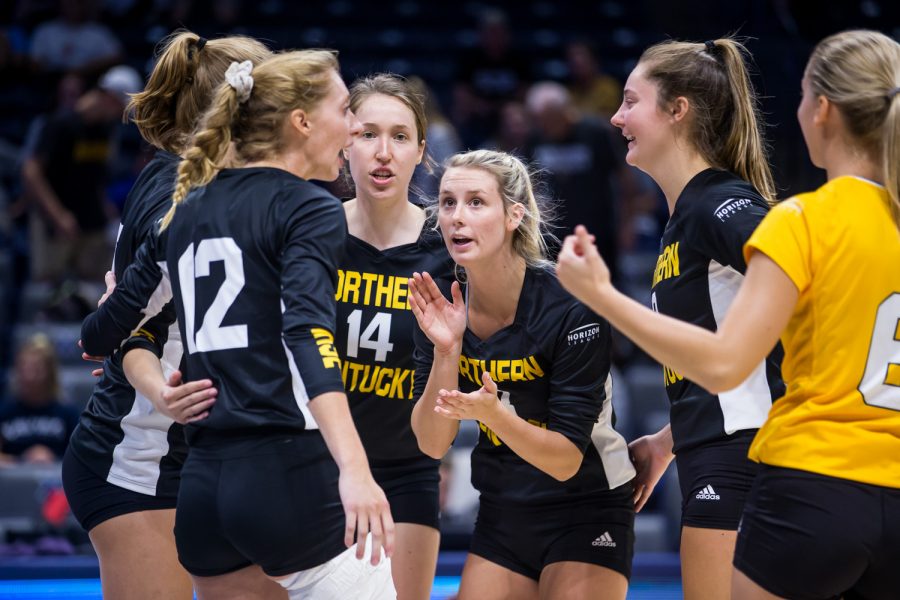 NKU players huddle during the game against Xavier. The Norse defeated Xavier taking 3 of 4 sets.

Game One vs Stony Brook University

The Norse started the first set with a strong lead of 8-3 with back-to-back kills from freshman middle blocker Abby Kanakry. The Stony Brook Seawolves were able to tie the game 11-11. The Norse continued to fight off the Seawolves, and eventually went on to hold three set points before putting the frame away on kills from sophomore utility player Anna Brinkmann and senior outside hotter Laura Crawford.

NKU started off the second set with a lead of 9-3, followed by another run of 8-2. The Norse remain in the lead putting away 10 kills with no errors. The Norse won the set 25-9, which is the first time NKU has held an opponent to under 10 points since Nov. 10, 2018 against Oakland.

The final set started with Stony Brook maintaining the lead, until NKU put together a seven point run. The teams continued to go point-for-point, but NKU was able to hold the Seawolves off. Brinkmann and Crawford had 10 kills each and senior setter Shelby Olsen had 15 assists and recorded a match high of three aces.

The first set started in Georgetown’s favor with a 6-2 lead. The Norse managed to fight back and tie it up 7-7. After several errors from the Norse, the Hoyas stretched the lead to 22-17, then the Norse tied the game back 23-23 after back-to-back hitting errors by Georgetown’s outside hitter—but the Hoyas were able to pull off the win of the first set.

The Norse bounced back in the second set starting with a 6-0 run. At the end of the frame, Georgetown made a run coming within four points of the Norse 20-16. Kanakry answered back to back kills and Brinkmann closed out the frame with three serves—the last ending in a game winning ace.

The third set started as a 10-10 tie. The Norse then pulled ahead with a 17-11 lead and didn’t let the Hoyas within six points. In the first half of the fourth set, the Norse led during the first half, but Georgetown was able to make a six point run bringing the score to 20-16. The Norse took the lead back to tie it up at 21-21. The Hoyas committed six straight errors, and the last came from a stuff block from junior middle blocker Bailey Western and Kanakry.

The final set of the tournament, the Norse committed 11 errors in the final frame. The Norse were able to get within two points 20-18, but the Heard knocked out five points in a row to end the match. Marshall took the match in a sweep 3-0. Junior libero/defensive specialist, Ashton Terrill ended the match with a record match high of 14 digs. Brinkmann and Kanakry were named to the all-tournament team of the Bulldogs Invitational.

The Norse will open up the home slate this weekend with the NKU Invitational at Regents Hall. Their first game of the weekend will be against Ball State on Friday, Sept. 13. The match is set for 6 p.m.