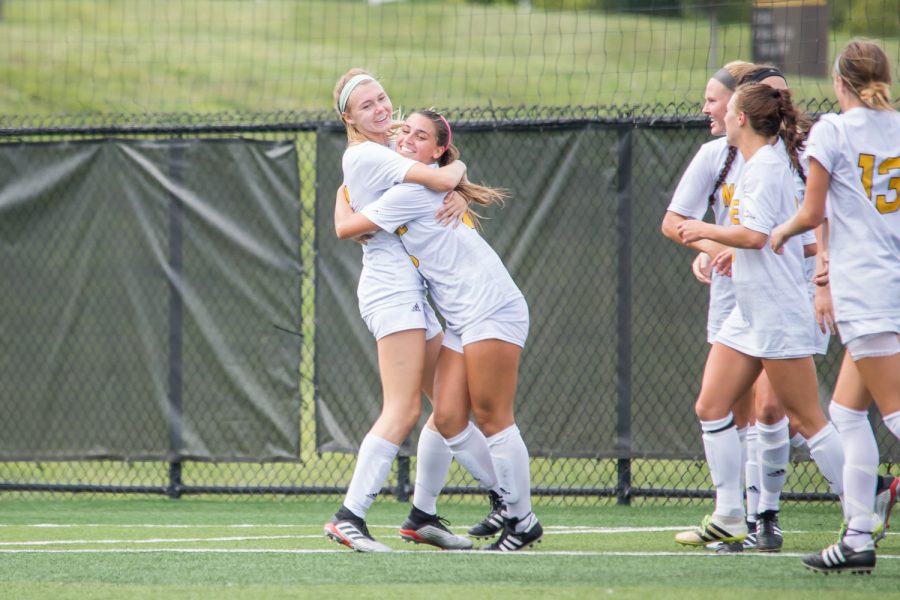 Gallery|5 Photos
Colin Johnson
Kailey Ivins (15) celebrates with Kayla Wypasek (23) after her goal during the game against Murray State. Wypasek had 1 goal on the game.

The NKU women’s soccer team has started their season 2-2 after a 3-1 win against Murray State over Labor Day weekend. The Norse are attempting to find their footing, with seven freshmen and a new transfer. With a younger team comes learning and growing pains, but the soccer team is embracing the time to learn.

“Developing as a team, it’s a very young team right now, but I think we all see great potential on our team and to get us to a championship,” senior midfielder and team captain Shawna Zaken said. “Just developing and learning and growing, I think that’s actually fun to do as a team.”

NKU women’s team is ranked second in the preseason conference poll after Milwaukee, who they lost to once in the regular season 1-0.

The Norse were placed third going into the Horizon League championship last year, but were taken down by the Oakland Grizzlies 2-1 in the Conference Semifinals.  The Norse still feel Milwaukee is the team to beat during the regular season.

“I feel like Milwaukee always challenges us and it’s always been a close game,” Fischer said. “Especially beating them in the championship three years ago. It’s always a fun game. It’s always for like the first or second spot and it’s just always a really important game.”

Nonconference play is just as important as conference matchups this season, with power teams on the schedule like Ohio University, who is ranked fifth in the Mid-American Conference, the University of Kentucky, who is currently ranked eighth in the Southeastern Conference and The Big East’s fourth-ranked Xavier University.

This year, the team feels as if everyone on the field can be a threat when their time comes.

“I’m excited to see like a bunch of different names up on the scoreboard,” Zaken said. “We played Lipscomb and we had four goals and four different players scored. That’s really a positive step to see how many players can get in behind and how much potential our team has.”

“Emily [Soltes], Ally [Perkins] and Shawna were in on the goal in the 88th minute, which was the third goal, which ultimately was the game winner in the Horizon League Championship,” Sheehan said. “They’ve had big moments already. So, again, we want to draw on that experience, and have them really lead the team to success this year.”

For the newcomers on the team, it’s really about adjusting to the commitment and physicality of playing for a collegiate team. Having a team that feels like a close-knit family definitely helps with adjusting.

“I think just adjusting, being away from home,” Zaken said. “I mean, there’s a lot coming in freshman year and getting adjusted to, so that’s really hard. But I think having a team like we do and how close we are helped a lot and just keeping positive.”

The Norse will continue working on their growth against the University of Kentucky, Thursday, Sept. 5 in Lexington, KY. Kickoff is set for 7:35 p.m.