The Norse had six saves compared to the Bobcats one. 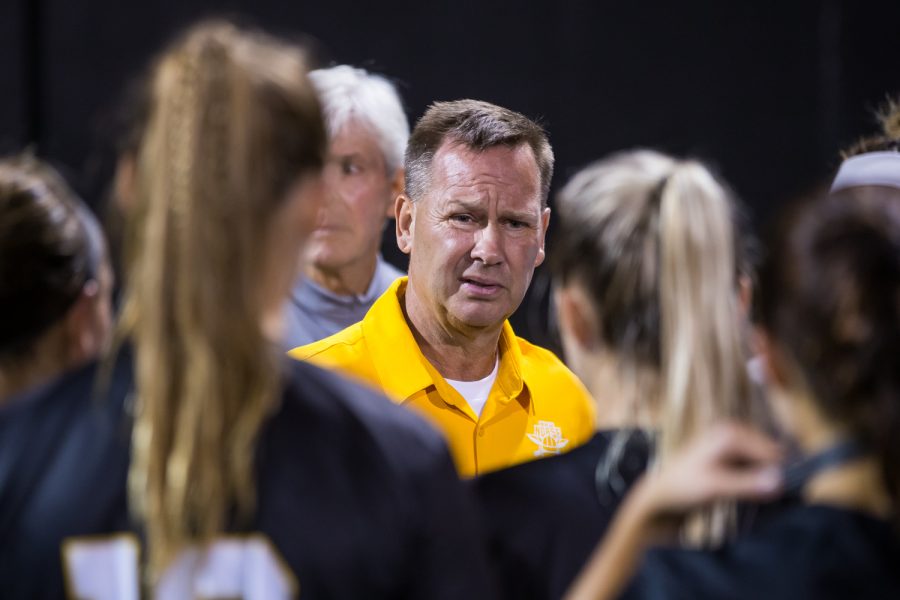 Gallery|10 Photos
Colin Johnson
Women's Soccer Head Coach Bob Sheehan talks to the team after a loss against Ohio University. The Bobcats won 1-0 and had 7 shots on goal to the Norse's 1.

NKU women’s soccer team lost their first game of the regular season 1-0 against the Ohio University Bobcats. The Norse are projected to finish second in the Horizon League, and start out the season 1-1, while the Bobcats advance 2-1 and were picked to place fifth in the preseason coaches poll for the Mid-American Conference.

The first real threat by the Bobcats was in the 10th minute of play, but sophomore goalkeeper Mimi Stines shut it down. The Norse countered the attack in the 17th minute with a corner kick by freshman midfielder Megan Sullivan. The kick made its way into the box, but a Bobcat defender heads the ball away before the Norse could get a foot on it.

“We came out slow and it just never really got to the point where we wanted it to get to,” Sullivan said. “If we were more intense, I mean, Ohio came out and looked like they wanted to win and we just weren’t giving the same effort that we gave against Lipscomb.”

The first half finished scoreless for both teams. The Bobcats had seven shots and two were on goal, compared to NKU’s five shots with only one on goal. Each team had the opportunity to score from one corner kick and five fouls were given to each team.

“I think the 50/50 balls were a big thing too,” Stines said. “They were first to a lot of 50/50 balls; we need to have that intensity like we wanted to win for our first home game.”

The second half wasn’t much different for the Norse. In the 57th minute, Ohio placed a corner kick right into the hands of Stines. Stines cleared the ball out pushing the Ohio offense back up the field. In the 59th minute, NKU’s Sullivan took a corner kick only to be deflected by Ohio’s defense sending the Norse into another corner kick. The shot was no good.

In the 61st minute, Ohio scored the lone goal of the night into the back left corner of the net. The Norse attempted several times in the last few minutes to get a shot, but their efforts fell short.

“I think the last six or seven minutes of the game when we really wanted that comeback goal to tie the game, I think we could’ve played the whole 90 minutes like that and it really would have benefitted us,” Stines said.

The Bobcats had 15 shots on goal doubling the Norse who had seven. Senior NKU Midfielder Shawna Zaken had three shots for the evening, with four other Norse with one attempt a piece.

“We have five newcomers in at the end of the game and we just need to continue to grow as a team,” Sheehan said.

NKU has the opportunity to work on their growth Thursday, Aug. 29 against Butler at home. The whistle blows at 7 p.m. and will be broadcasted on ESPN+.