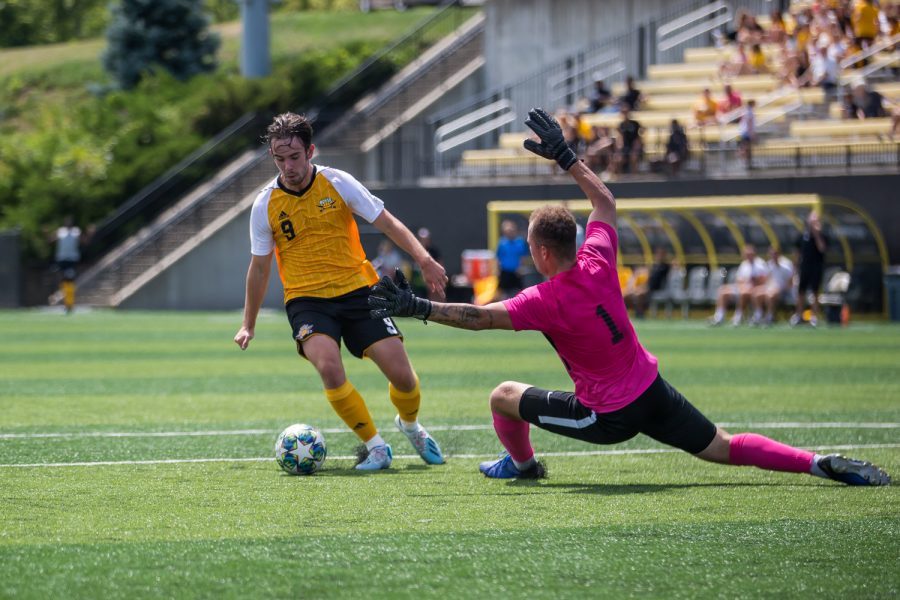 Gallery|10 Photos
Colin Johnson
Alex Willis (9) fights to shoot during Sunday's Exhibition match against Tiffin. Willis had 2 goals on the game against Tiffin.

The men’s soccer team starts the preseason against Tiffin 5-0 on Saturday following a tie 0-0, against #8 University of Kentucky. Four Norse were able to contribute to the scoreboard in the victory.

Within the first five minutes of the game the Norse made their way onto the scoreboard. Forward sophomore transfer Gianni Bouzoukis scored from an assist by senior midfielder Rikard Lindqvist.

“We’ve got a lot of returning players that were very successful at this level last year,” Head Coach Stu Riddle said. “We saw that with the amount of different goal scorers we had and the group of guys that got different assists.”

In the 22nd minute the Norse attempted a shot, but was blocked by Tiffin. Norse senior defender TJ Harris made his way up to the box following the Tiffin block to score.

“It was my first time ever scoring in a college game,” Harris said. “So it felt good to get out there and score and just defend well.”

Not even five minutes later sophomore forward Alex Willis made his first mark of the evening on the scoreboard. In the 26th minute, NKU was dominating 3-0.

In the 39th minute, junior midfielder Alex Greive drew fouls which got NKU a free kick. The attempt was blocked by Tiffin defense. In the 44th minute, Tiffin crossed the ball and scored— bringing the score to 3-1. Despite the lone goal, freshman goalie Baj Maan had several saves and controlled the box.

“My belief in that is that if you’re good enough, you’re old enough,” Riddle said. “… Baj has had some tough quality experience already with the club teams that he’s played on and as we saw today he’s going to be very good for us.”

The fifth and final goal for the Norse came in the 71st minute. Senior midfielder Connor Probert crossed the ball into the box and Willis knocks the ball into the back of the net by a header. The Norse went for another cross into the goal, but the header was too high above the goal.

“We’ve got an exceptionally talented group that really buckled down and worked hard,” Riddle said. “The sky is the limit for us, but we’ll take it one game at a time.”

To start the regular season the Norse will face Grand Canyon University in Phoenix. The game is slated for 7 p.m. MST on Friday, August 30.