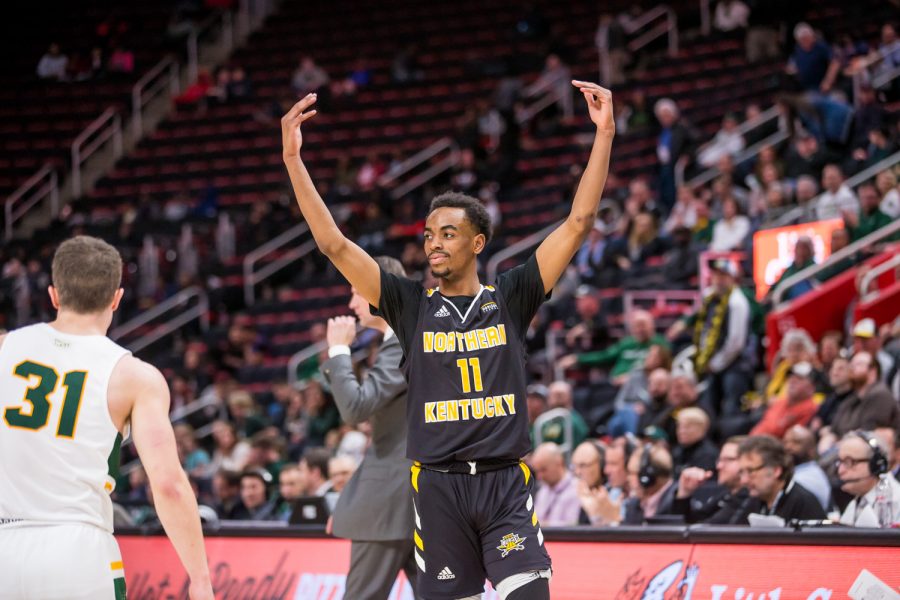 Jalen Tate (11) reacts during the final seconds of the final game of the Horizon League Tournament against Wright State. NKU defeated Wright State 77-66.

How likely are the Norse to beat the Red Raiders?

It might be a longshot, but that would make an upset that much sweeter.

The 14-seeded NKU Norse are taking the fight to Tulsa against 3-seed Texas Tech Red Raiders today at 1:30 p.m. in the school’s second March Madness appearance since entering Division I.

But how likely are the Norse to win? We have some thoughts, plus odds, ends and stray observations you should know before watching the game.

The Norse have 20 percent odds against the Red Raiders. It doesn’t take an expert to know Coach John Brannen’s offense-heavy squad has choppy waters ahead against a defensive 3-seed Texas Tech.

WHAT DO THE EXPERTS SAY?

Djoko, the NKU freshman from Strasbourg, France, has garnered the Norse some international attention as he heads into this year’s tournament.

“Numéro deux” has recently been featured in several online French sports publications, including BeBasket which called Djoko a “cautious and confident” player. BeBasket also called out his 2 points, 3 assists in his ten minutes against Oakland during the Horizon League Tournament second round.

Since his start last year, Djoko has been a regular feature on Parlons-Basket NCAA “French of the Night” report. On his last performance against Green Bay in the regular season, Parlons-Basket said Djoko helped “get the job done” shooting 3-for-3 on field goals and 7 total points against the Phoenix.

McDonald likely to finish with just under 2,100 career points

Texas Tech’s all-time leader in career points, Andre Emmett, had 2,256 points by the time he graduated in 2004. He later played in the NBA for the Memphis Grizzlies.

Kentucky teams across the bracket

Two of three Kentucky teams advanced to the second round of March Madness Thursday. It’s probably not who you would have thought.

In an upset, the Marquette Golden Eagles (5) fell against Kentucky’s Murray State Racers (12). With a 12-seed knocking out a 5-seed, will the cosmos allow 14-seed NKU to beat 3-seed Texas Tech in the same weekend? Time will tell.

If the Norse advance, they’ll face the victor of Buffalo (6) and Arizona State (11). Those teams play immediately after the Norse at 3:50 p.m. If they advance, the Norse would play in Tulsa on March 24.